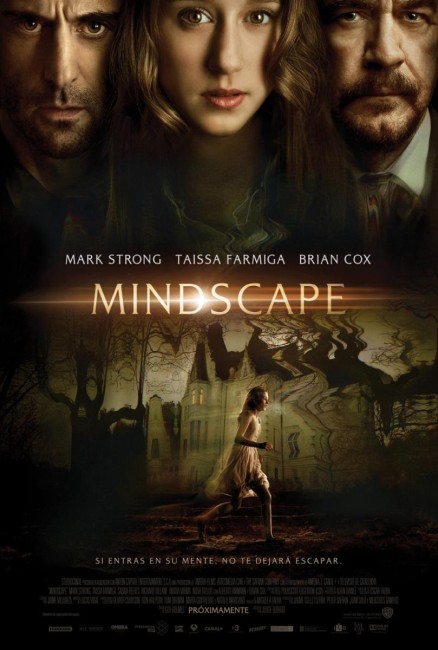 John Washington is one of the top mind detectives – people skilled in the use a device that allows them to enter the memories of others and observe. John is suffering emotional distress following the suicide of his wife. He returns to Sebastian Cunningham, the head of his agency, asking for work because he needs the money. Sebastian assigns him to the case of Anna Greene, the sixteen year-old daughter of a wealthy family who has abruptly stopped eating. John finds Anna to be highly intelligent. In entering her memories to get to the root of her problem, he learns how Anna has been surrounded by suspicious incidents – possible child molestation, her teacher taking nude photographs of her, the poisoning of several classmates. Through this, he cannot be sure whether Anna was innocent or is feeding him false memories. In doing so, he comes to fight for Anna as her stepfather tries to have her sent away to an institution.

Mindscape, also released as Anna, is a Spanish film (although is shot in English language and was mostly filmed in Toronto). It is a debut film for Spanish director Jorge Dorado who had previously worked as a second unit director, most notably for Pedro Almodovar. The film is produced by Spanish director Jaume Collet-Serra who has gained a certain amount of attention here for horror films such as House of Wax (2005) and Orphan (2009), plus the killer shark film The Shallows (2016) and the Disney theme park adaptation Jungle Cruise (2021), but now mostly specialises in English-language action vehicles like Unknown (2011), Non-Stop (2014), Run All Night (2015) and The Commuter (2018). In recent years, Collet-Serra has branched out as a producer of several horror films and thrillers including the likes of Hooked Up (2013), Eden (2014), Curve (2015) and Extinction (2015).

It would be safe to say that there would have been no Mindscape had there not been the success of Christopher Nolan’s Inception (2010) and its theme of people venturing inside the dream space of others. Mindscape/Anna is one of several films that came out copying Inception‘s ideas, along with the likes of Vanishing Waves (2012), Real (2013), Incarnate (2016) and Lucid Dream (2017). This substitutes therapists venturing inside patient’s memories instead of dreams but remains similar in all other respects, excepting perhaps its lack of conceptual ambition in terms of having characters engaged in heists on multiple levels of dream. Mark Strong’s hero, just like Leonardo DiCaprio in Inception, also comes haunted by issues concerning his dead wife.

Mindscape is certainly well cast, even if some of the worthwhile names among the line-up – Brian Cox, Saskia Reeves, Indira Varma – are only there in nothing supporting roles. Mark Strong has slowly gathered a presence over the last few years and turns out a fine, intently driven hero that seems to naturally draw sympathy to him. Opposite him is Taissa Farmiga, who came to attention in various seasons of tv’s American Horror Story (2011– ). She gives a performance that impresses with its intelligence and playfulness. Around her, the film creates an ambiguous sense of both sympathy and distrust. The scene where Mark Strong interviews her for the first time, where every exchange between them seems charged with loaded meaning, bodes well.

On the other hand, Mindscape seems poised to do something interesting with its set-up – only never does. Unlike Inception or any of the other dreamscape films, you are never drawn into what is happening during the journeys into inner space, which is what a film like this should be doing. Jorge Dorado’s direction is far too mannered. Most of the turnings of the plot are the routine mechanics of thriller contrivance that crucially take place in the outside world concerning who might be involved, who is lying, whether Taissa Farmiga can be trusted and so on. The science-fictional potential of the memory detective is one that the film displays no interest in beyond using it to springboard off into its thriller elements. Much of the show falls apart at what seems a contrived effort to create a twist ending that fails to come off, before a resolution that seems largely stolen from Body Heat (1981).