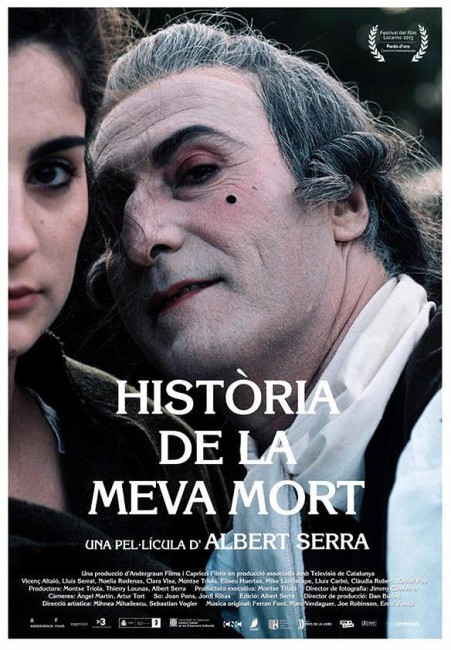 The aging Giacomo Casanova thinks about writing his memoirs that would tell of his adventures with women and philosophy of life. He and his manservant Pompeu then set out on a journey to Carpathia. There they meet the mysterious Dracula who begins to prey upon the womenfolk of their party.

Giacomo Casanova (1725-98) has a reputation as one of the great lovers in history. Casanova led an extremely colourful life. Starting out studying law, he soon abandoned this and went through numerous career changes, including a stint in the military, as a violinist, a spy, an alchemist who offered sham occult practices, as a translator of classic works and a writer, even setting up the French state lottery. Most of Casanova’s career however is noted for a series of scandals and outrages – he travelled widely throughout Europe and in every region was a notorious gambler where he frequently fell into debt, if not outright financial ruin, defied authority and above all conducted numerous affairs of the heart. These exploits had him jailed several times on various charges and he made a notorious escape from the city jail in Venice and went on the run. At the behest of a patron, he spent the last few years of his life writing his memoirs. Although uncompleted by the time of his death, these extend to twelve volumes and were eventually published as The Story of My Life (1822), in which he recounts his various escapades.

Casanova’s exploits and story have garnered some attention on film, beginning with the silent Casanova (1918) and passing through some 25 other biopics, most notable of these being the BBC tv series Casanova (1971) scripted by Dennis Potter and starring Frank Finlay; Fellini’s Casanova (1976), an extravagantly fantastacised version from Federico Fellini starring Donald Sutherland; the British tv mini-series Casanova (2005) with David Tennant; and the bland film Casanova (2005) starring Heath Ledger; even Casanova’s Big Night (1954), a comedy with Bob Hope as a meek tailor who assumes Casanova (Vincent Price)’s identity.

The Story of My Death comes from Catalan director Albert Serra who had previously made five feature films with the likes of Don Quixote adaptation Honour of the Knights (Quixtoic) (2006), Birdsong (2008), The Names of Christ (2010), The Lord Has Done Wonders in Me (2011), 60 Seconds of Solitude in Year Zero (2011) and subsequently The Death of Louis XIV (2016) and Liberty (2019). None of these are particularly well known, and do not appear to have had widespread releases even in Spain. Serra seems to prefer historic subject matters and his directorial approach, it would appear, always takes the same, slow mannered approach.

The Story of My Death – the title is intended as an ironic take on Casanova’s autobiography The Story of My Life – comes with a winning set-up, the simple pitch line of “Casanova meets Count Dracula.” The premise alone had me in the door of the VIFF screening – I didn’t need to read anything more about the film. On the other hand, it soon becomes apparent that almost everything interesting about the idea and its two characters has been torpedoed by Serra’s approach.

Serra makes an incredibly slow-going film. Scenes go on for long minutes at a time. Vicenc Altaio’s Casanova is in most of these – he spends most of the first half philosophising about women and his outlook on the world. Some of this is interesting and would appear to be fairly accurate to the real Casanova. However, it is also an incredibly dull approach to a film. Altaio’s dialogue is delivered in a mannered voice, never rising out of a calm, offhand monotone. Quite frequently he delivers his dialogue while eating at the same time. At one point, we see him reading a letter and laughing for about two minutes, although we are never privy to what is in the letter. Serra gives us another 2-3 minutes of Altaio straining to take a dump in a chamber pot and then happily showing the results to his servant and so on.

Most peculiarly, the one thing we don’t get is what we almost always associate with Casanova – the portrait of the great lover. Aside from a single romp with a maid and occasional philosophical digressions on the subject, this is an entirely chaste portrait of Casanova. You get that this is meant to be a film about Casanova towards the end of his life but surely you would expect from this either a work about him living with regret over losing his virility or else swimming in his reminisces.

Serra’s slow approach certainly gives you a sense of a film that is immersed in its historic period. Vicenc Altaio does a fine job of subsuming himself in the part of Casanova and is convincing. But the slowness is something that almost approaches the Tarkovsky-esque and is extremely demanding on one’s patience. Crucially, the film lacks much that could be said to resemble a plot, any sense of narrative, or even the feeling that it is heading in a particular direction. Mostly, it is just long, observational scenes. By contrast, if say a commercial American editor were to take his scissors to the film, the work of 148 minutes that we have would be reduced to no more than 20 minutes in total screen time.

The film’s most fascinating aspect comes in the latter half when Serra brings Casanova and Dracula together. You wonder how exactly the film is going to tackle this. As historical figures, Casanova and Vlad Tepes, the historic Dracula, lived about three centuries apart. That only leaves a film that either has to conduct a whoppingly anachronistic juggle and hoping nobody notices or else going for the Dracula the vampire of popular fiction. Yet you wonder how the latter would work in that Albert Serra’s approach is almost completely the opposite of anything resembling a genre horror film.

The results end up being strange to say the least. Eliseu Hertas’s Dracula looks like no Dracula we have ever seen on screen before – more resembling a patriarch of the Eastern Orthodox Church than a Bela Lugosi or Christopher Lee. He seems to woo the women in Casanova’s entourage to him with enigmatic promises like healing them, although what he is doing is not always clear. We see him appearing to have drunken one woman’s blood, although this is more the aftermath of blood-drinking that we had in 1950s vampire films – no more than a tiny red smear left at the neck, although we do finally get a scene right at the end where Dracula attacks one of the women and bites into her neck.

The crucial thing the film seems to avoid is ever pitting the characters of Casanova and Dracula against one another – the film aches with a symbolic contrast, the great lover in his old age reminiscing about the women he once had, versus the creature who has transcended old age and is freely able to prey on young women – but I don’t even recall a single scene where the two characters even talk to one another. The film peters out at a complete dramatic non-ending.