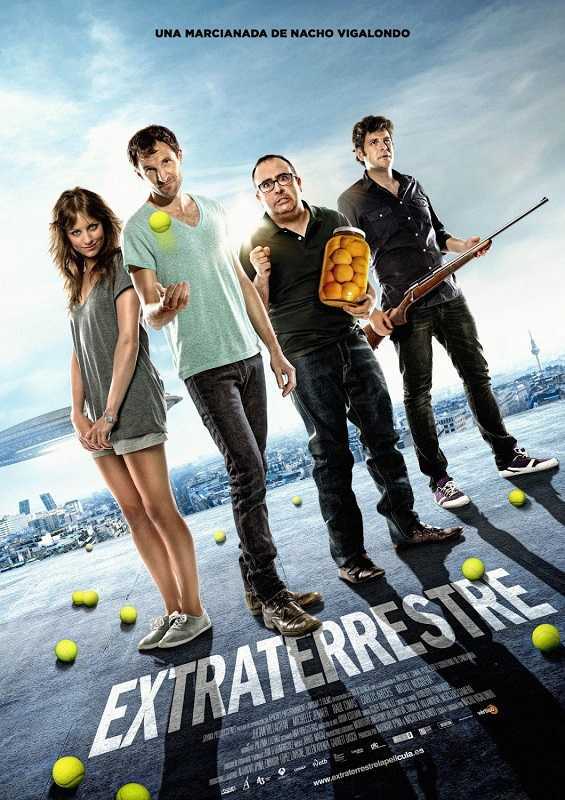 Julio wakes up in the apartment of Julia. It appears that the two of them met up the previous night and had sex, although neither of them can remember what happened. As Julio prepares to leave, they become aware that there is a giant UFO hanging over the skies of Madrid. It becomes apparent that UFOs appeared over all the major world cities last night and that the government has evacuated the populace. As they puzzle over what is happening, they are visited by Angel, Julia’s neighbour who is fixated with her. Not long after, they also receive a visit from her boyfriend Carlos. They are forced to lie to Carlos and say that Julio was someone that Julia found fallen on the street and brought in. However, when Angel threatens to tell Carlos that Julia cheated on him with Julio, Julio turns their speculations that the inhabitants of the UFOs may be disguised as ordinary people around and accuses Angel of being one of the aliens to get rid of him. This precipitates a series of crises where their lies about what happened start rebounding on them and small things are misinterpreted. In the midst of this, Julio and Julia realise they have feelings for one another.

Extraterrestrial was the second directorial outing from Nacho Vigalondo, the Spanish writer/director/actor who had a big word of mouth festival hit with the time travel film Timecrimes (2007). Extraterrestrial played a number of fantastic film festivals but failed to gain the same word of mouth that Timecrimes did. Vigalondo next went onto make Open Windows (2014), a reality bending thriller about celebrity stalking that plays out across social media; Colossal (2016) wherein Anne Hathaway develops a strange symbiosis with a giant monster; and wrote Paradise Hills (2019) about a strange re-education institute; as well as directed episodes for various anthology films, including the A is for Apocalypse segment of The ABCs of Death (2012) and the demented Parallel Monsters episode for V/H/S Viral (2014).

Nacho Vigalondo stated that he regarded Extraterrestrial as the antithesis of Steven Spielberg’s War of the Worlds (2005) – rather than a mass spectacle film, it was about people reacting to the arrival of aliens in ordinary ways, often making wildly incorrect assumptions about what was happening and so on. On screen however, Extraterrestrial proves to be a head-scratcher. It comes with the label of a comedy but you are not sure for some time if you are meant to be registering it as comedy or a straight drama – there seem no clues about which way you are meant to take it.

As we absorb into Extraterrestrial, it becomes apparent that it is intended as a comedy of errors. How tiny little matters, and especially lies told to cover things up, snowball out of control – the explanation for the drawing that Julian Villagran makes of his design for a coffee cup car being taken for an alien vehicle; the jar of peaches that Carlos Areces brings to dinner and the ways it keeps reappearing; the claim that Michelle Jenner makes up to Raul Cimas that Carlos Areces said he was lying; Areces’s car that Julian Villagran vandalises and abandons in the park. Nacho Vigalondo’s Timecrimes was a film about tiny incidental detail and the way they all fit together into a jigsaw pattern later. You get the impression that the small unnoticed details are something that fascinate Vigalondo and in similar ways, Extraterrestrial is a film about the incidental detail getting in the way when people try to keep their lies straight.

As an alien invasion film that is played more as a comedy of errors, Extraterrestrial is baffling. It is hard to get into Nacho Vigalondo’s intended tone and so much of the film passes you by where the characters’ action become a puzzle that you are not privy to until things connect up later in the piece. It feels like a film of bizarrely surreal dogleg turns played in complete deadpan – and ones that often don’t make a lot of sense. Julian Villagran is also not the most natural seeming romantic lead, although the film does gain a mild life during the scenes where he and Michelle Jenner conduct a secret romance under the nose of her boyfriend Raul Cimas after he moves into the apartment and decides they cannot leave each other’s sight.

Perhaps the most frustrating aspect of Extraterrestrial as a science-fiction film is the ending that it eventually arrives at. [PLOT SPOILERS] We never learn anything about what the UFOs are and see nothing of their inhabitants. Indeed, all that we ever get to even see of the UFOs is the corner of one of them in the sky above the buildings of the alley and on the live feed from the videocamera they set up, and a single full shot of it over the city as Julian Villagran and tv announcer Miguel Noguera sit back on a rooftop at the end. What it makes Extraterrestrial into is a comedic variation on an existential science-fiction film like Stalker (1979), Man Facing Southeast (1986), Friendship’s Death (1987) and K-PAX (2001) wherein the UFO remains a giant question mark in the sky and the film becomes more about the way in which people project onto it what is in their heads.