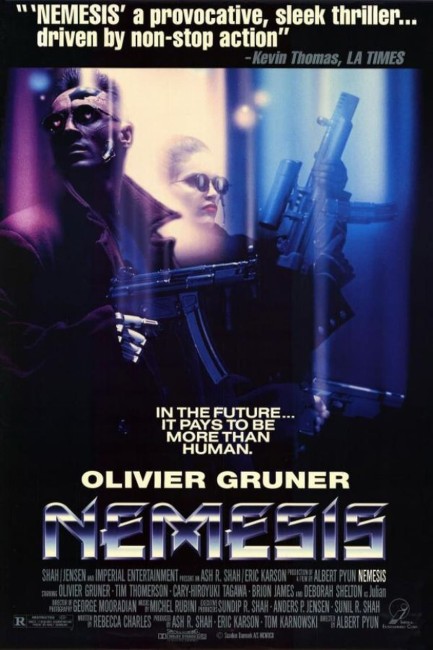 In the year 2027, Alex Rain is an LAPD officer who has been 85% replaced by cyborg parts. After being severely damaged in a shootout with the Red Army Hammerhead terrorist organisation, Rain quits the force and becomes a smuggler in Rio. He is then abducted by LAPD commissioner Farnsworth who implants a bomb in Rain’s chest to force him to undertake a mission to Indonesia to stop the Hammerheads who have stolen the security plans for a coming Japanese-American summit meeting. As Rain follows the Hammerheads, he learns that he has not been told the truth and that the Hammerheads are in fact trying to stop a scheme to substitute people in key positions with cyborgs that are indistinguishable from human.

Nemesis is, surprise of surprises, a good film from Albert Pyun. (A list of Albert Pyun’s other genre films is at the bottom of the page). In the 1990s, Pyun made a virtual career out of kickboxing killer cyborg films with the likes of Cyborg (1989), Knights (1993), Heatseeker (1995), Omega Doom (1996) and the three sequels to Nemesis.

Most of the success of Nemesis can be laid at the door of screenwriter Rebecca Charles. Charles turns in a script that uses standard Cyberpunk tropes with an audacious assurance. (Although, as with most Albert Pyun films, she gets the difference between a cyborg and an android mixed up – it is never made clear if the androids running about are humans that have been 100% cybernetically replaced, which would justify calling them cyborgs, or not). She is happy to steal from all over the place:- the film resonates with echoes of RoboCop (1987) – the beginning where the hero is blown apart by shotgun and then pieced back together and the patch-up job seen through malfunctioning optic circuits; Escape from New York (1981) – the hero with an implanted bomb forced to conduct a mission to save a political summit meeting; and The Terminator (1984) – lots of references, particularly the climactic battle with the android that has been bared to its skeleton (a sequence that is even created by the same effects company that provided the skeletal Terminator) – but merges them to create a film of some originality.

Rebecca Charles is particularly good when it comes to achieving a grittily cynical Cyberpunk nihilism. She single-handedly succeeds in investing inexpressive hero Olivier Gruner with a character in the voice-over narrations. The picture she leaves us with of a nihilistically burnt-out figure who is not sure whether he is a human any longer is superb. The plot’s killer robots are old hat – one feels these are there as the film’s selling point on the video-market – but the delving into an underworld of conspiracies and particularly the gradually reversal and turning upside-down of the hero’s original convictions and the contrast of his existential confusions about whether he is man or machine and having to defend humanity against what is essentially his other half, is exceptionally strong.

Nemesis is a vehicle for kickboxing star Olivier Gruner, someone who – one though they would never hear themselves have to say – is even less expressive than his countryman Jean-Claude Van Damme (who himself came to notice in Albert Pyun’s Cyborg). The film bristles with action and big guns, which are requisite for the particular video-market niche that Nemesis is being sold to.

However, Albert Pyun works with the script to create a melding of action, character and potent internal mood. This is particularly evident during the beginning where Pyun reveals Olivier Gruner as a cyborg in the aftermath of a massive shootout and Jennifer Gatti stands taunting him about his humanity and his protests that he is only 85% replaced. After blowing her away, he tells us in a haunting voice-over narration that he was sorry he never had the opportunity to tell her how her taunts had troubled him.

Other images strike as well – Deborah Shelton removing Olivier Gruner’s eyeball to extricate an attached bug; her being blasted apart to be revealed as a cyborg too, her torso still crawling across the floor before Tim Thomerson wipes her memory by plunging his fingers into her eyeballs; the sad ending where Marjorie Monaghan bids goodbye to Gruner before her memory is wiped.

Pyun is not without his share of silly moments – one scene where Olivier Gruner makes an escape from the hotel by plunging down to the ground-floor in a single fall by shooting each successive floor out beneath him with a machine-gun is impressive but preposterous. Despite a handful of flaws, including a climax that falters due to a weakly animated skeletal cyborg, Nemesis is surprisingly good.

Albert Pyun made three sequels all shot back-to-back:– Nemesis 2: Nebula (1995), Nemesis 3: Prey Harder (1995) and Nemesis 4: Death Angel (1996). None of these starred Olivier Gruner and were connected to this film in name and basic killer cyborg theme only.