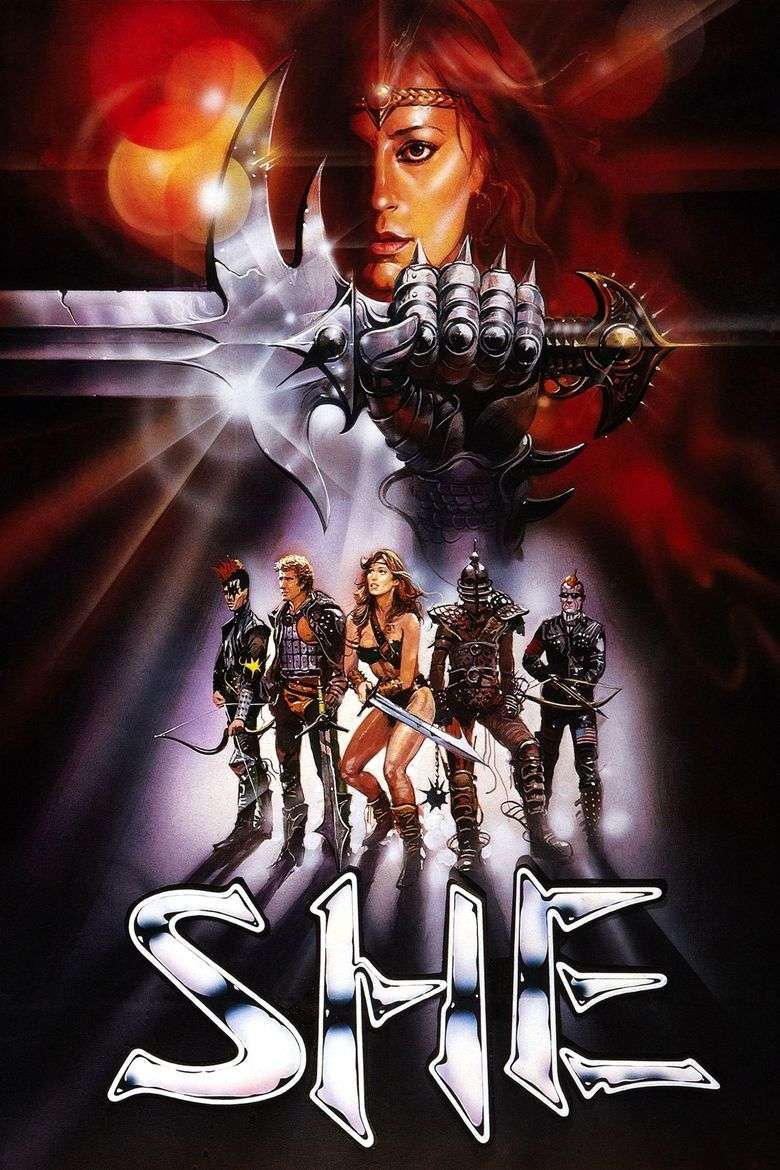 It is twenty years after the holocaust. The warlord Nork abducts a girl from a peaceful community. Two of her friends, Tom and Dick, set out on a journey to rescue her. However, they venture into the territory of the Amazonian warrior queen She where they are captured and made slaves. They make an escape and take She prisoner so that she can guide them to Nork’s domain. This takes them on a perilous journey across a wasteland where they encounter mutants, werewolves, a crazed genetic engineer and a psychic god.

If there was ever an award for worst ever ripoff of Mad Max 2 (1981), then She would almost certainly be the lead contender. Indeed, if Edward D. Wood Jr ever lived long enough to make ripoffs of Mad Max 2, this is surely the film he would have made.

The film nominally claims to be based on H. Rider Haggard’s She (1886), a classic novel wherein British explorers encounter a lost city in Africa ruled over by the immortal Queen Ayesha, where one of the members of the expedition turns out to be the reincarnation of her lost love. This has been filmed a number of times, most notably as She (1935) and as Hammer’s She (1965) with Ursula Andress, as well as a number of productions during the silent era.

It is evident that the connection between H. Rider Haggard’s She and Avi Nesher’s She begins and ends at the title. There is not the remotest shred of connection that goes beyond the credit ‘Inspired by the Novel by H. Rider Haggard’. It is even possible that Avi Nesher has never read the book in that he seems to assume that the title character Ayesha was named She, something that she was never referred to as in the book. More than anything, She appears to have been conceived as a marriage of the two genre hits of the 1982 season – Mad Max 2 and Conan the Barbarian (1982). Notedly, Nesher imports Sandahl Bergman who came to attention as Valeria in Conan. The film uses the post-holocaust setting from Mad Max 2 but to make what is more of a cheapjack sword-and-sorcery film, a good many of which were made in Italy following Conan.

Everything about She is mind-boggling in its bizarreness. The film features to wit:– a Frankenstein monster robot with garishly clashing, odd-coloured socks; chainsaw-wielding mutants in mummy bandages and dark glasses who make bad jokes as their arms are pulled off; a psychic mutant with glowing green eyes who insists that he is a god; gay werewolves in Roman togas who hold poolside orgies and clearly display their fake plastic Dracula fangs when they try to attack the heroes; a genetic engineer in a judge’s wig with a very hairy 300 pound assistant who dresses in a tutu and sleeps in a bath; and a scientist who dresses as a classical composer in ruffled shirt and frock coat, along with construction worker’s hardhat.

There is a bizarre encounter with a gay border guard who dresses as a sailor replete with eyepatch and does impersonations, and who, seemingly in a take on Monty Python and the Holy Grail (1975), keeps multiplying every time one of his limbs is severed. Instead of a matte painting of Nork’s ruined city, the film substitutes what looks like a panel taken from a comic strip.

The film contains a ridiculous soundtrack, which varies between a tinny synthesizer score and heavy metal groups like Motorhead and Bastard. At one point, the heroes are trapped in a Star Wars (1977) garbage compactor, whereupon the soundtrack suddenly and incongruously bursts into a hard rock song. It is hard to tell if the film is trying to be camp or not – if it was intended straight, it is mind-boggling to think of what kind of substances Avi Nesher and most of the cast and crew had to inhale to make the film.

Israeli-born director Avi Nesher next went onto make the decent action film Timebomb (1991) about brainwashing; and followed this with the fascinatingly bizarre Drew Barrymore horror film Doppelganger (1993); Savage (1995), a science-fiction film almost as whacked-out as this; and the horror film Ritual (2002). Nesher and his Mahagonny Pictures production company have also produced genre films such as Automatic (1995), Mars (1996), The Outsider (1996), Legion (1998) and The Minion/Fallen Knight (1998).