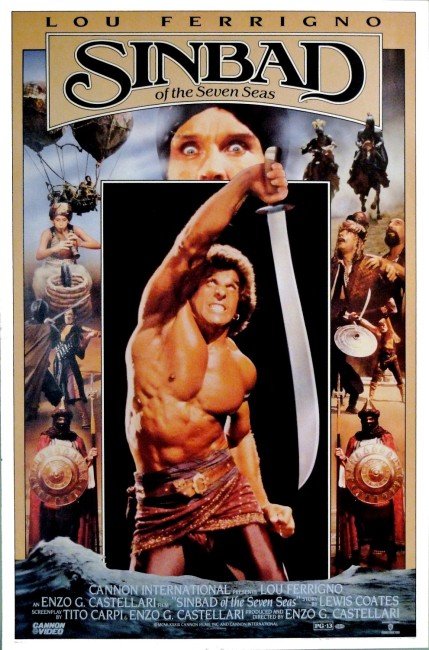 A mother reads Edgar Allan Poe’s tale of Sinbad to her daughter as a bedtime story. In the story, Sinbad discovers that Jaffar, the evil vizier to the good Calif of Basra, has placed a spell on Basra, turning its people into animals and enslaving the mind of the Calif. Sinbad sets forth on a journey to retrieve the five sacred gems of Basra that will defeat Jaffar, which Jaffar has dispatched to places of great evil. He must succeed before Jaffar’s spell saps the will of the Calif’s daughter Alina, the beloved of one of Sinbad’s crewmen, and forces her to marry him.

Although this production is bankrolled by US-based Cannon Films, it has all the hallmarks of, and indeed many of the personnel from, a quick Italian-made sword and sandal ripoff. (Cannon similarly bankrolled the made-in-Italy Hercules (1983) also starring Lou Ferrigno). Key personnel include no less than two Italian exploitation directors with Enzo G. Castellari and Luigi Cozzi, the director of Cannon’s Hercules.

There is no surprise to the fact that Sinbad of the Seven Seas is not a particularly good film. This is immediately evident in the casting. When suitable casting for a Sinbad comes to mind, one would think producers would look for somebody lithe and acrobatic like an athlete – instead we get former body-builder Lou Ferrigno, previously best known as the green-skinned title character in tv’s The Incredible Hulk (1997-81), who makes for a Sinbad that does not leap, bound and twirl with a scimitar but wades through melee combat with a broadsword. It is a beefcake Sinbad, a Sinbad wholly lacking in grace.

However, such lack of conviction extends to the rest of the film – like the Japanese samurai who drops Confucian quotes or the sorcerer who talks about his biorhythms and the grating modern colloquialisms – Lou Ferrigno comes out with lines like “Gosh, you’re sure beautiful,” and “No dice, huh,” at various points, something that crashes utterly any attempt to create an atmosphere of Arabian fantasy.

The sets and costumes are reasonable but many other scenes display a lack of budget – the transformation of the people of Basra is never shown, only talked about, as is an evil wind that Jaffar creates. The zombie army that Jaffar conjures up is terrible – they come wearing bedsheets and when the zombies start conducting martial arts moves and reveal street clothing under the bedsheets, the effect is unintentionally funny.

As Jaffar, John Steiner overacts atrociously. Just when one thinks there could not be anything worse than watching Steiner, three-quarters of the way through up pops Leo Gullotta who cravenly cowers, whimpers and gibbers in a nonsensical babble that lacks any intelligible dialogue.

The plot traipses from one sequence to the next – it is never more than simplistic cliche. Lou Ferrigno seems to be having fun waving a sword around but he never convinces one that his character is in danger, and the simple-mindedness of everything never raises the remotest interest in its audience. The adventure could have been entertaining but there remains a gaping lack of conviction at the centre of it, as though none of the people involved had any interest in the project.

Enzo G. Castellari has been a prolific director in Italian pulp cinema since the 1960s. His other genre contributions include the giallo psycho-thriller Cold Eyes of Fear (1971), the revenge film The House By the Edge of the Lake (1979), the blatant Spielberg ripoff Shark/The Great White (1982), 1990: The Bronx Warriors (1982), Bronx Warriors 2 (1983), the incredibly bad post-holocaust film The New Barbarians/Warriors of the Wasteland (1983) and the action film Light Blast (1985). These days Castellari is perhaps better remembered as director of the original Inglorious Bastards (1978).