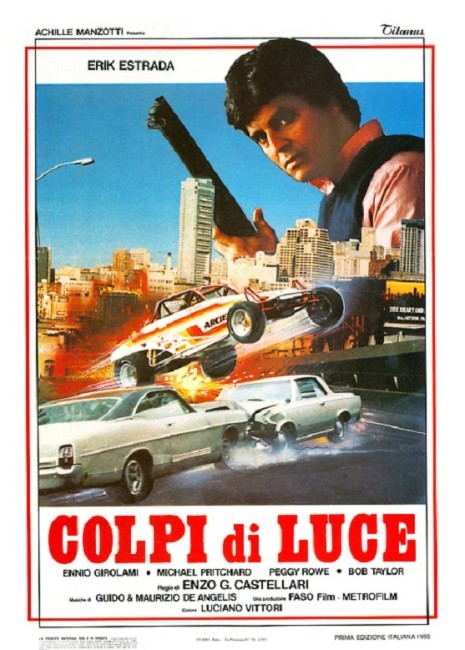 In San Francisco, criminals conduct a series of attacks using a powerful laser device. Police inspector Ronn Warren is placed on the case. The people behind the scheme demand a multi-million dollar ransom from the city. Warren traces down the individual behind the scheme as former Russian physicist Dr Yuri Soboda.

Enzo G. Castellari was an Italian exploitation director. Castellari emerged in the 1960s and enjoyed some popularity during the 1970s directing Spaghetti Westerns and Italian crime films, along with other genres of the day. (Castellari’s other genre works are listed below). These days Castellari is perhaps better remembered as director of the original Inglorious Bastards (1978). Castellari’s name has been praised by Quentin Tarantino who made Inglourious Basterds (2009) in homage.

Light Blast is a Castellari-directed action film shot in English. It appears that Castellari and his crew actually went to shoot the film on location in San Francisco. The film stars Erik Estrada who found fame several years earlier as Frank ‘Ponch’ Poncharello on the hit tv series CHiPs (1977-83), although thereafter failed to do anything of renown. (Estrada’s later-to-be wife Peggy Rowe also plays his girlfriend in the film). Castellari’s brother Enio Girolami, who enjoyed a modest career under the name Thomas Moore, appears as the Russian scientist.

The virtue of any Enzo G. Castellari film is that it can be guaranteed to have some decent action sequences. The film consists of much in the way of car chases. In fact, the complaint would be that the film consists of nothing but lots of running round and car chases at regular intervals. The plot in between these scenes could have been sketched on the back of a postcard. Erik Estrada gets a highly entertaining entrance where he goes into a bank robbery/hostage situation posing as the pizza boy, is ordered to strip to his underwear and then blows the robbers away with a shotgun hidden inside the pizza box.

The biggest disappointment comes in viewing Light Blast as a science-fiction film – the very title Light Blast pitches the film more as science-fiction than it does as the action genre where its feet are far more firmly located. The film has a couple of entertainingly cheap meltdown effects near the start where the laser is unleashed on a couple making out in an empty train carriage and a few scenes later when it is used at a racetrack. That said, the laser is only employed on these two occasions and is forgotten as the action scenes take over. It is a textbook example of what Hitchcock called a McGuffin – the item around which the script revolves and all parties are chasing.