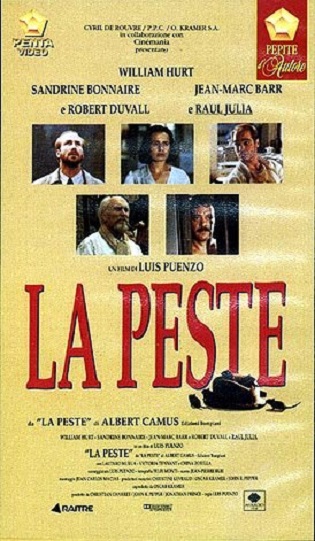 In the South American city of Oran in 199_, Dr Bernard Rieux diagnoses several cases of plague. The authorities use this as a pretext to close the city off and declare martial law. Rieux is angered as the authorities then start to round up and quarantine the infected in a stadium. Martine Rambert, a French tv correspondent that Rieux befriends, attempts to escape the city but is imprisoned by a black market smuggler.

The Plague is a film based on a novel by the renowned French writer Albert Camus. The Algerian-born Camus became a French resident in the 1920s where he led an interesting life, which included dalliances with Communism, friendship and falling out with Jean-Paul Sartre and even editing a newspaper for the Resistance during the Nazi Occupation. However, it is with his novels that Albert Camus became a major figure in 20th Century French literature and a key name in the development of the absurdist tradition. Camus produced works such as The Stranger (1942), The Myth of Sisyphus (1942) and The Fall (1956). Camus’s most famous work, The Stranger, deals with an Algerian man who is charged with the unprovoked shooting of an Arab and is convicted because of his refusal to accept social lies – that he believes in God, that he felt emotion over his mother’s death, that he loved his mistress – which have him branded as amoral and convicted by the jury. The Plague (1948), one of Camus’s lesser regarded works, is seen as a metaphor for the Nazi Occupation. It circles around images of totalitarian oppression and concerns itself with a cross-section of humanity and their varied reactions to ‘the absurd’ – in this case the meaningless of certain death.

As a result of its source material, The Plague is a film that emerges from the literary tradition rather than one that bears a lineage to the cinematic plague outbreak genre a la Survivors (1975-7), Outbreak (1995) et al. Which is possibly its downfall. A dreadfully significant literary weight hangs over the film. It seems to consist of nothing except the central characters wandering about hotel rooms and hospitals contemplating the situation. The pacing in the film is utterly inert. There is no drama to it – instead of the film concentrating on the scientists developing a cure or any of the dramas that usually drive other such outbreak films, people just talk – and then the plague suddenly stops. Nothing in the film ever seems to happen – and it takes an agonising two-and-a-quarter hours to do so.

The Plague is a singularly glum and dour film. The photography is drab – all shadowy grey apartments and stone buildings. The film stars William Hurt, who seems to have etched out a stock casting node for himself in a series of characteristically dreary roles, and is at least perfectly cast in the surroundings. Albert Camus’s book is about how people rise to deal with a fatal situation and what happens when civilised order breaks down, but the characters in the film are rarely given such insights.

There are occasional moments where the film does strike, particularly in its second half – the sermon in the church where the priest says the plague is there to deliver people to Paradise and William Hurt challenges him to come down to the hospital and change blankets; the priest lying down in the mass grave to be buried; the young altar boy who keeps failing to hit the high notes during singing practice as he succumbs. The rest of the time though The Plague is singularly boring.