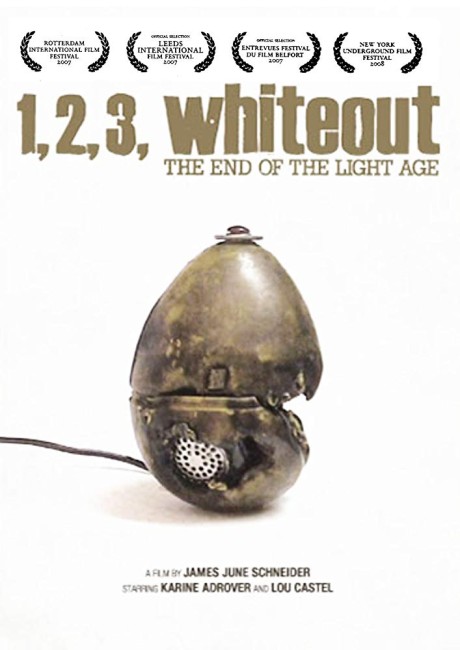 It is the future. After being caught cheating in a videogame parlour, the unemployed Veronique is offered a job with a scientist who conducts a series of experiments in trying to record images and patterns of light from her thoughts.

1, 2, 3, Whiteout: The End of the Light Age comes from James June Schneider, an American experimental filmmaker who resides in France. Schneider is an advocate of the process of ‘vampling’, which uses video images in a live performance, processing and feeding them through various distortion effects in the same way that an audio artist samples various sounds. Schneider is part of one such live vampling performance group Matterlink. Schneider has also made a number of short films, including his so-called Dystopian trilogy Oasis (1995), Blue is Beautiful (1997) and Median Strip (1999), which are not science-fiction films but made up of various images of America.

Schneider has made various experimental films that consist of things like a record needle scratching the film emulsion. Typical of Schneider’s output are the two films that accompany the dvd for 1,2,3, Whiteout, Government Radiation (2006) and X-Ray (2007), which consist of strips of film that have been multiply passed through airport baggage x-ray machines, resulting in the gradual degradation of the film stock to complete static, and all run over with grating industrial noise. This kind of experimental filmmaking is more about novelty than drama – experimental films are ones that you watch once, go “hmm that’s kind of an interesting effect” and then forget them, not the sort of films that you keep in your dvd collection to watch over and over again.

1, 2, 3, Whiteout: The End of the Light Age nominally toys with science-fiction ideas but mostly it feels like another of James June Schneider’s experimental films. Schneider shoots random images – of streetlights and pedestrian crossing signals, cranes in shipyards, the patterns made by carnival lights or neon reflected on the river. There are numerous scenes of streets and building exteriors by night wherein the film is affected by flecks of what looks like glowing fireflies. There are randomly interspersed pieces of war film footage from WWII and the Iraq War, although why is not clear. Certainly there is a beauty to some of the effects that Schneider achieves – shots of night buildings being lit up with light that seems like shifting sand blowing across them, or interesting effects with mottled spots and the shadows cast by lights behind trees as it crosses buildings. Alas, pretty light effects do not a film make.

Though the film’s dvd cover gives the impression that it is a dystopian science-fiction film, there are only a handful of scenes where 1, 2, 3, Whiteout stops being an experimental film and moves over into the arena of science-fiction. There is an opening scene with Karine Adrover using computer terminals that seems like upturned fishbowls on stands – firstly to ask about available jobs and then turning to another terminal to check for dating opportunities – which does an effective job in suggesting a future.

We also get a scene where Karine Adrover and friends visit Dock Lucina, which turns out to be something akin to a Star Trek holodeck simulation. There is a strange scene where Lou Castel takes Karine Adrover out for some fast food and they are served in what looks like a standard McDonald’s-type restaurant but where the cashier stands with their upper body hidden behind an opaque window.

Typical of James June Schneider’s pretensions is a scene where Karine Adrover and Renaud Martinez appear to be viewing a performance where various artists (some of which are Schneider’s real-life co-vamplers) play around with sound machines, including a woman who sings with her head encased in a glass box, and then we are told this is only the warm up to the concert and that tickets are now on sale.

The most annoying thing about 1, 2, 3, Whiteout: The End of the Light Age however is its complete lack of anything resembling a plot. I watched the film through twice and yet remain completely mystified what the experiment that Lou Castel’s scientist was conducting was about – something to do with recording light patterns from thoughts. Even given that, I was still baffled about what was meant during his constant urging Karine Adrover to travel into the darkness. Furthermore, Lou Castel seems bored and indifferent to his role. His frequently mumbled dialogue has a meandering vagueness as though he were ad libbing most of it but at a loss as to what to say. Mostly the experiment seems to be just a springboard for Schneider to show interesting light patterns and that is the sum of the film.

I wanted to give 1, 2, 3, Whiteout a chance but in the end it is tedious. It starts with much muddled talk about an experiment but fails to clarify anything, or even offers any resolution or dramatic twist to the experiments. It doesn’t even appear to feature any discernible plot. It is hard to work out what James June Schneider thought he was doing in assembling a camera and actors, as I am baffled in trying to work out what he was trying to say or even any point that the film has.