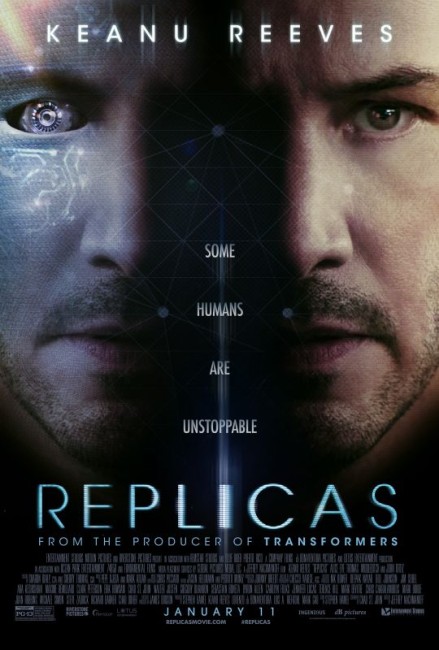 William Foster is a scientist employed by Dinonyne Industries at their research facility in Arecibo, Puerto Pico. In the laboratory, he is trying to perfect a mind upload process but his latest attempt to transfer the mind of a dead soldier into a robot body results in the soldier tearing itself to pieces as soon as it is activated. William has brought his wife Mona and three children to Puerto Rico with him. However, William skids while driving on a rainy road and crashes. Everyone in the vehicle aside from William is killed. He calls co-worker Ed Whittle to the scene and persuades him to cooperate in extracting the memories of each of his family members. Ed then then steals several incubation pods from the lab and William sets out to create clones of his family in his basement. However, Ed can only obtain three pods and William is forced to delete all trace of his youngest Zoe from the others’ memories. He uses an accelerated process to incubate the clones, while maintaining the pretence to other people via social media that his family are away or being home schooled. The clones are brought to life with their extracted memories implanted and William then settles into maintaining the pretence that everything is normal. However, when William’s boss Jones discovers that William has brought his family back to life, he demands the secret of the process.

Whatever you want to say about his acting ability, Keanu Reeves is a name that has come to represent an undeniable cool on screen. He has shown smarts in the projects he takes on – this is after all the man who is John Wick and Neo from The Matrix (1999) and sequels we are talking about. For every piece of romantic fluff like Sweet November (2001) and Destination Wedding (2018) that Keanu has signed onto there are three times the number of edgy, ambitious works you can count ranging from Johnny Mnemonic (1995), A Scanner Darkly (2006) and The Neon Demon (2016) to playing the young Buddha in Little Buddha (1993), to different mainstream genre works like playing the title role on Constantine (2005) and Klaatu in the remake of The Day the Earth Stood Still (2008). Even when he made his directorial debut, Keanu chose something off the beaten track like the martial arts film Man of Tai Chi (2013). So when Keanu takes on a producing role on a film, as he does on Replicas, you feel it is something you should sit up and pay attention to.

The script for Replicas originates with Stephen Hamel, a Keanu Reeves associate who has previously written/produced his Siberia (2018) and the upcoming Rally Car (2020). The film is directed by Jeffrey Nachmanoff who has mostly worked as a writer, producer and occasional director in tv. Nachmanoff’s previous genre outing was as Roland Emmerich’s co-writer on The Day After Tomorrow (2004), which leaves you with ominous anticipation that that film’s exceedingly liberal disregard of science may presage ill things for Replicas.

Replicas reminds a good deal of Transcendence (2014), which wanted to be a big important film on the topic of mind upload but flopped badly. (Replicas also has Keanu Reeves engaged in trying to perfect a mind upload process). This is a film that wants to be a big important work on the subject but fails badly. Both here and in Transcendence, A-list actors – Johnny Depp, Keanu Reeves – have signed on in the lead role. It is shame in either case that both actors seem to be wanting to push conceptually challenging science-fiction projects yet fail to have done even a basic amount of reading on the topic or hired someone who knew something about it to advise. As a result, either work ends up being laughed off screen.

I was hoping Replicas might be something like another Recreator or at the least another The 6th Day. However, one’s hopes for Replicas being an intelligent work on the subject evaporate within the first few minutes where we see the untold exabytes of data in a human mind being downloaded (via syringe) and transferred into the CPU of a robot body in the space of less than two minutes. The film sinks from there. In fact, next to works like Damnation Alley (1977) and the collected tv series of Irwin Allen, Replicas surely counts as the science-fiction film with the least amount of plausible science in it.

First there is Keanu’s harebrained scheme that involves placing cellular material from his dead family into pods to create clones and then downloading their memories into the clone bodies. You have to laugh in the scenes where Keanu is explaining his plan to assistant Thomas Middleditch who is protesting the whole time that it won’t work. Usually in real world science, any new process requires hundreds of trial runs before it can be said to be a success. Here not only is Keanu trying out two new processes but is expecting either to work upon the first attempt. You kind of have sympathy for Middleditch bugging out in the middle of this.

The film is but one step away from the magical cloning process that always manages to bring people back exactly the same as the original with even the same hairstyle that we get in films like Multiplicity and The 6th Day. (In reality, cloning would be no different than giving birth to a baby – it would have the same genetic material as its donor, in other words it would be a twin that is not born at the same time as its sibling). The script does some handwave science with talk of accelerated cloning processes that can bring the family back exactly as they were before they died. Normally something like an accelerated process would lack any fine tuning and have the result of bringing them back to maybe within a couple of years or so of the original but here manages to do so without any of them noticing a thing different.

You also cannot help but be amused by contemplating the surprises that the family might experience when they come around – like the fact that any scars, piercings or tattoos, not to mention dental work would have vanished, hair length would not be the same, any hairdye would have vanished. There’s also the uncomfortable questions Keanu might face in wondering whether wife Alice Eve or daughter Emily Alyn Lind might shave their armpits, legs or pubes and then suddenly come around to find they have a full growth. Or perhaps you are left wondering whether Keanu went and shaved all of them before waking them up (although the idea of an adult man having to shave his teenage daughter’s privates does leave you with a much more dubious film than the one we get). The other weird thing would be that when Keanu and Alice Eve go to bed together again, she would be a virgin all over again.

There’s also the ridiculous part where Keanu discovers that there are not enough pods and so makes the choice to not resurrect their youngest daughter. There is then the laughable scene where he sits at his computer and creates a search pattern that deletes all reference to her in their memories as though human memory was akin to a search-and-replace function in a word processing program.

There are also the funny scenes where he keeps up the pretence that they are away, avoiding friends by messaging to their friends across social media or announcing the children are being home schooled. You cannot help but wonder how baffled the family members are going to be when they wake up, find that several weeks have disappeared and try to deal with conversations with friends about things they supposedly said but have no recall of doing. Or when the school or friends of the daughter who has been deleted from memory call up asking about her. At most, the family get confused as to why the milk in the fridge has gone off (Keanu presumably having been too busy while cloning the family to want any milk in his coffee).

The irritating thing is that there is a potentially good science-fiction film hidden within Replicas. What if instead of focusing on Keanu as he attempts to perfect the process the film had been written from the point-of-view of his wife Alice Eve as she wakes up, thinking it is just another day only to be baffled at finding several missing weeks, record of things she has no memory of doing (not to mention several weeks of untamed body hair) and then faces a call from the school asking about the daughter she has no memory of, only to gradually uncover what her husband has done? If the story had been built as a work of conceptual breakthrough about people waking up to the true state of their world akin to something like The Island or Bruce Willis at the end of The Sixth Sense (1999), you could have had a potentially worthwhile film. As it is, the film has nowhere to go except end on cliched scenes of the corporate bad guy coming to commandeer the process and pursuit by armed heavies.