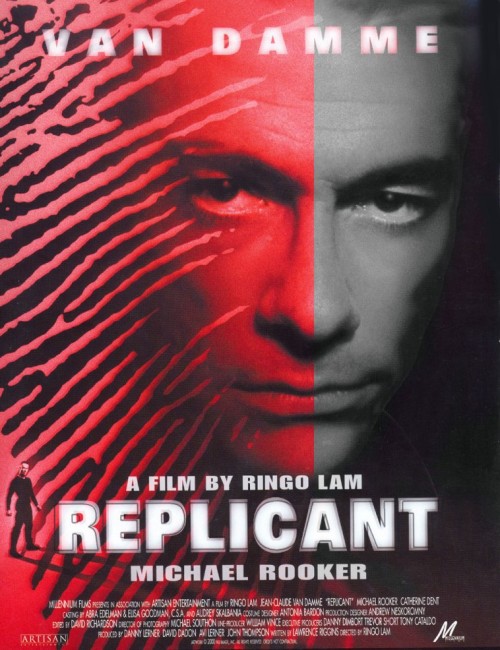 Seattle police detective Jake Riley retires after the latest killing by the serial killer known as The Torch, leaving the case unsolved much to his regret. He is then recruited by agents from the National Security Force who want his help – they have cloned a replicant of The Torch from a DNA sample of hair left at the crime scene. The replicant has the blank mind of a child. They place the clone into Jake’s custody in the hope that it will provide inside information that will lead them to The Torch.

For a time, Belgian kickboxer-turned-actor Jean-Claude Van Damme was one of the big three action stars, up there alongside Arnold Schwarzenegger and Sylvester Stallone. Towards the end of the 1990s, Jean-Claude Van Damme’s star began to fade. Since Double Team (1997), Van Damme has only had one film that has achieved a theatrical release – Universal Solider: The Return (1999) – while his other films, including Replicant, went straight to video/dvd (and from about the mid-2000s, Van Damme seemed to go into semi-retirement). All of which is a great shame as Replicant is surprisingly good and has been called one of the few occasions when Van Damme gives a performance. The director is Hong Kong émigré Ringo Lam who made the acclaimed likes of Full Contact (1992) and Twin Dragons (1992) and previously came to the West to direct Van Damme’s Maximum Risk (1996) and his subsequent In Hell (2003).

You can see why Replicant never received a theatrical release. As action films go, it is a very quiet film – it does not trade in huge spectacle and mind-numbing kinesis but in character-driven story (which may well say something about the nature of the modern action blockbuster). The action scenes are there but they integrate into the plot such that one fails to notice them with the boilerplate effect you often get in action films. Ringo Lam is not a director with much of a sense of humour, although there is one hilarious scene where Michael Rooker takes Jean-Claude Van Damme to his mother’s house and strips him down in the bathroom searching for a bug, only for his mother to walk in and think they are having sex.

The film’s central idea is interestingly original. The script draws upon a cliche view of cloning that has no basis in scientific reality – the idea that a clone would be privy to the thoughts of its donor. (In truth, a clone such as the one featured here would have about as much insight into its donor as a child who had grown up never meeting its parent). That is less important than the way that Replicant uses this idea as the basis of a strong character story. Particularly good is the way that the film hangs between trust and uncertainty as to whether the replicant is also going to turn out to be a serial killer as well.

Jean-Claude Van Damme is not particularly believable as the serial killer, looking unconvincing in shades and trying to make his gloopy blandness look bad and mean – and crucially the serial killer is not a character that engages as anything other than a stock threat. However, Van Damme is much better as the replicant, playing with a mixture of stumbling, blank stupidity and doe-eyed innocence that eventually becomes appealing – it is a part that Ringo Lam has cleverly managed to work in to incorporate the blankness of Jean-Claude Van Damme’s acting.

However, the one that one ends up watching is not Van Damme but rather Michael Rooker. Rooker made a startling debut in Henry: Portrait of a Serial Killer (1986) but has since been caught in a series of supporting parts where he is usually cast for a harsh, hard-headed sullenness – he has down perfect the type of role that gives you the nagging uncertainty that in real life Rooker is the sort who gets mean-drunk and beats his wife. Rooker gives the best performance that he has in some time here, projecting a harsh likeability that goes surprisingly well up against Jean-Claude Van Damme’s idiot child performance.