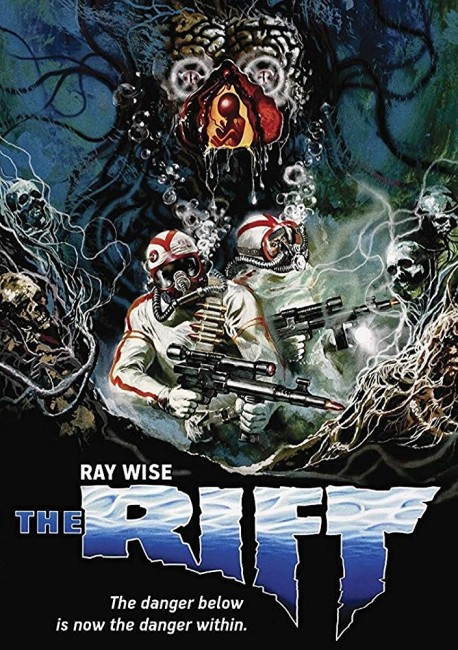 Submarine designer Wick Hayes learns that Siren 1, one of the submarines that he designed, has gone down. This is being blamed on his designs but he protests that it was due to subsequent modifications made by the company Contek. Contek send him down to investigate aboard the Siren 2 under Captain Randolph Phillips. As they descend, the submarine becomes trapped inside a deadly toxic weed. Wick comes up with the idea of freeing the ship by electrifying the hull – this works but the weed then invades the ship. They trace Siren 1’s black box to a cave where they discover that Contek has been engaged in illegal genetic engineering experiments that have produced a series of mutant creatures.

The Rift was made at a particular point around 1989 when James Cameron’s The Abyss (1989) was about to come out. A host of films B-budget films, which included Deepstar Six (1989), Leviathan (1989), Lords of the Deep (1989) and The Rift, all came out around the same time, jumping on the idea of doing Alien (1979) underwater in anticipation of getting ahead of the next big one, unaware that The Abyss was not a monster underwater type of film at all.

The Rift was made by low-budget Spanish hack director Juan Piquer Simon, also variously credited on his films as J.P. Simon and Juan Piquer. (See below for Juan Piquer Simon’s other films). In many respects, The Rift is a passably average B-budget effort – indeed, it is probably one of Simon’s better films, particularly budgetarily. It has some surprisingly competent model effects.

Simon also marshals a reasonable cast – although wastes most of them. Jack Scalia displays all the expression of a tree trunk as the hero. The secret pleasure of the film is R. Lee Ermey who goes through the hardass military officer routine that served him as a career in a number of films since his first appearance in Full Metal Jacket (1987). However, instead of just doing his bawling drill sergeant thing, Ermey is allowed to humanise the character and make all the bellowing hard-headedness surprisingly sympathetic for once. He is the most alive thing in the entire film.

Juan Piquer Simon conducts a passable build-up as the team enter the caverns, while the attack scenes are surprisingly gory. However, the film falls apart about two-thirds of the way through as the result of an unfocused script. None of it, one realises, makes any sense. It is never clear what the sinister corporation is up to. Why are they sealing up their own lab and deliberately sinking their own submarines? The creatures in the cave are given a nominal (if impossible to believe) explanation but there is none offered for the cause of the toxic weed. Similarly, the climax of the film falls well short of what it should be. The climax of a film like this should be the crew fighting a last pitch battle against the seaweed as it threatens to take over the entire submarine, with the survivors probably forced to abandon and blow up the submarine in order to destroy the menace. Instead, all we get is a battle against a company double agent and then, almost as an afterthought, the destruction of the submarine.

Juan Piquer Simon’s other genre films are:– the Jules Verne adaptation The Fabulous Adventure at the Center of the Earth/Where Time Began (1977), the superhero film Supersonic Man (1979), Beyond Terror (1980), a further Verne adaptation Monster Island/Mystery of Monster Island (1981), the slasher film Pieces (1983), The Return of E.T. (1983), the monster movie Slugs: The Movie (1988) and Cthulhu Mansion (1990). All are cheap and poorly made.