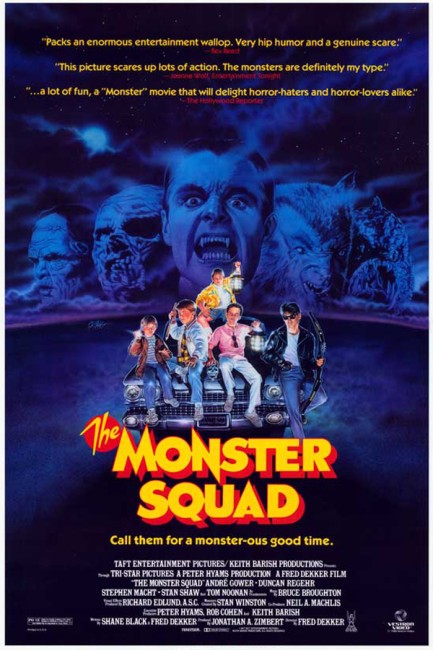 A group of kids have formed a horror fan club The Monster Squad. Group leader Sean Crenshaw’s mom finds the diary of Abraham Van Helsing in a garage sale. This tells of an amulet that can banish the forces of evil on one particular night every hundred years – indeed, this very night – although it is a task that Van Helsing failed at exactly one hundred years ago. Count Dracula arrives determined to stop them from finding the amulet. He resurrects and brings together The Wolfman, the Frankenstein Monster, the Mummy and the Gill Man to help him. The Monster Squad find an ally when Sean’s annoying younger sister Phoebe befriends the slow, dull-witted Frankenstein Monster.

The Monster Squad is a popular classic. Although perhaps you could more accurately say that it is a work that has a nostalgic fondness in the memories of a number of modern commentators who grew up in the 1980s more so than it is actually a great film. It does come with an appealing premise though – the idea of resurrecting the Famous Monsters (Dracula, Frankenstein’s Monster, The Wolf Man, The Mummy and The Creature from the Black Lagoon) in the modern era.

The monsters (with the exception of The Creature) had each appeared during Universal’s Golden Age between 1931 and 1941, been put through multiple sequels and then began to be paired off against one another beginning with Frankenstein Meets the Wolf Man (1943). A few films later this monster team-up was played for comedy in Abbott and Costello Meet Frankenstein (1948) and has remained there fairly much since in efforts such as the Mexican comedies Castle of the Monsters (1957) and Frankenstein, the Vampire and Co (1961), the children’s Claymation film Mad Monster Party? (1967) and other efforts such as Transylvania 6-5000 (1985), Monster Mash: The Movie (1995) and Hotel Transylvania (2012) and sequels, while you could argue that the big-budget Van Helsing (2004) should have been a comedy. (For more detail see Crossovers).

The Monster Squad was made by Fred Dekker who had come to attention only the previous year with the script for the horror comedy House (1986) and then made his directing/writing debut with the genre homage Night of the Creeps (1986), which received modest word of mouth. Alas for Dekker, The Monster Squad was not a wide success (at least in cinematic release) and he has only delivered a handful of other works – the scripts for the spy parody If Looks Could Kill/Teen Agent (1991) and the revenge film Ricochet (1991), several episodes of Tales from the Crypt (1989-96) and only one other directorial outing with the widely trashed Robocop 3 (1993). (The most interesting work Dekker’s named was attached to during this time was an American remake of Godzilla that never went ahead). Robocop 3 appeared to put an end to Dekker’s directorial career and his only other credit since the 1990s has been as a producer on the tv series Enterprise (2001-5), although he did later return as co-writer of The Predator (2018).

The other interesting name on the credits is Shane Black, a long-time friend of Fred Dekker since they were in screenwriting class together at UCLA. Black had a big success the same year with the script for the Mel Gibson hit Lethal Weapon (1987) and The Monster Squad was his second film credit. He subsequently went onto other high-profile action scripts for The Last Boy Scout (1991), Last Action Hero (1993) and The Long Kiss Goodnight (1996). The end of the 1990s too saw a fading of Black’s career before he triumphantly emerged during the 2000s first as director/writer of the quirky detective film Kiss Kiss Bang Bang (2005), followed by the Marvel Comics adaptation Iron Man Three (2013), The Nice Guys (2016) and The Predator.

As with other works of the mid-1980s such as The Howling (1981) and Fright Night (1985), there is the sense that classic monsters are not so much being revived for one more outing as they are being brought back to life into a world where they have been turned into pop culture icons and the kids are surrounded by the lore and nerd trivia through tv viewings. There is a potent scene here where Tom Noonan’s Frankenstein monster feels despondent at realising that his face has been reduced to a scary Halloween mask.

Black and Dekker (I’m sure they are sick to death by now of all the power tool puns)’s appealing idea is to incarnate the Famous Monsters in a Little Rascals adventure of sorts. The film has been consciously crafted as a kid’s movie – scenes like where Michael Faustino writes a letter “Dear Army Guys …”, calling his father because there is a mummy in his closet or his tearful complaint “The Creature stole my Twinkie,” are quite charming. Everything has made with a hip 1980s attitude that is decidedly refreshing with talk of the wolfman having to wear pants “so his wolf-dork doesn’t show”, or questions of whether he is able to drive, while at one point Horace Chame is able to drive the vampire away with garlic-flavoured pizza. This is contrasted with some lovely images like all of the kids happily walking along a street accompanied by Tom Noonan’s hulking Frankenstein monster.

The script has a looseness to it. It feels more like a big easy adventure slung together to feature a series of scenes with kids and monsters encountering one another than a complete dramatic story. Sometimes scenes seem random – no explanation is offered why the mummy would choose to enter Michael Faustino’s house and hide in the closet and then shuffle its way out the window again. The story is too dependent on contrived McGuffins. This was one of the first films to start using stock elements that have become well-worn parts of the monster movie by the mid-2000s – of diaries left by Van Helsing and the monster hunters; an all-powerful artefact that can banish/change the balance of good and evil; a pre-destined anniversary night when all of this occurs. About the only thing we don’t have the tired cliche of descendants of Van Helsing and/or modern characters named after the ones in Bram Stoker.

The Winston Studios makeups offer some uneven variations on the Universal originals. The Mummy has been freeze-dried to only about four feet in height, although does have an amusing scene where it is grabs onto a jeep the kids are in and drags along behind until one of them ties its bandages to an arrow and shoots it into a tree whereupon it is unravelled as they speed off. The werewolf has been streamlined to the point it looks more like a squat, feral greyhound, while the Creature from the Black Lagoon becomes a dopey-eyed BEM.

Cast with prize over-actor Duncan Regehr, Count Dracula just another suave snarler – outfitted in standard tux, high collar and red-lined cape, Regehr seems no more than the standard character you meet at every Halloween costume party but has no more depth than that. The disappointment of resurrecting all the monsters is that, aside from Dracula and Frankenstein, the script fails to find much for them to do.

The one characterisation that does succeed though is that of the Frankenstein monster. Black and Dekker are very aware of the appeal that Boris Karloff’s original monster had for little children – the scene where it meets Ashley Bank is clearly modelled on the famous riverside scene with Little Maria in Frankenstein (1931) and the image of she and the monster returning holding hands is a surprisingly tender one. The film is full of resonant echoes – like the image the film momentarily offers when Leonardo Cimino says he thinks he “knows something about monsters” and the camera closes in to the concentration camp tattoo on his wrists.