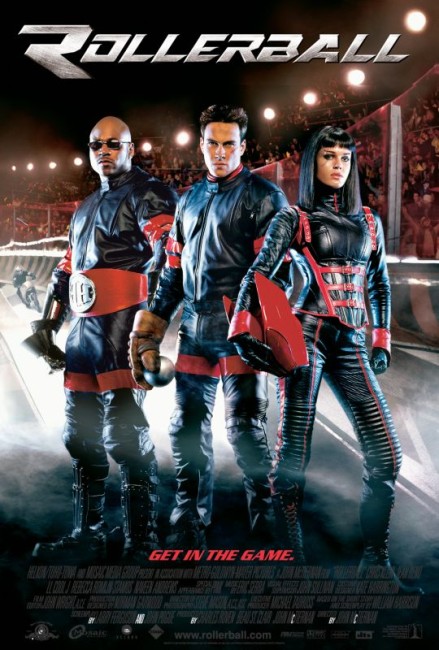 Jonathan Cross has become the No. 1 player in the ultra-violent game of rollerball, a combination of motocross, ice hockey and football. The game is played across the former Russian republics and has been turned into a top-rating cable show by its promoter Alexei Petrovich. Jonathan then uncovers evidence that Petrovich has been deliberately arranging near-fatal accidents in order to increase ratings. As Jonathan tries to quit the game, Petrovich hunts him down and then places him in a game without any rules with the intention of killing him.

John McTiernan was one of the great action directors in the American mainstream who has made classics such as Predator (1987), Die Hard (1988) and The Hunt for Red October (1990), as well as the marvellously underrated urban ghost story Nomads (1986). In the 1990s, McTiernan’s career faltered with successive flops like the environmentally conscious Medicine Man (1992), the mega-disaster of the witty action movie spoof Last Action Hero (1993) and the ho-hum box-office and critical responses with which the otherwise reasonable likes of The Thomas Crown Affair (1999) and The 13th Warrior (1999) were greeted. Continuing along this downward path, Rollerball was held up for some months before being granted a release and when it did come out was greeted with some astonishingly bad reviews and consigned almost immediately to videostores.

It is important to remember that in 1975 there was no identifiable genre such as the action film. The original Rollerball was mounted as a Dystopian science-fiction message film about the struggle for individuality in an homogenised future. A large part of the reason for the film’s success was in audiences reacting to it as an action film, rather than to its often heavy-handed message component. The remake however comes in the hindsight of two decades action movie-making – one where the idea of ultra-violent future bloodsports has become a cliche in the sf/action subgenre. Equally, this is a post-NFL, post-WWF Rollerball, where the idea of such bloodsports has become almost a reality – in fact, WWF CEO Vince McMahon’s son Shane makes a cameo appearance in the film.

The remake, co-written by McTiernan’s Red October screenwriter Larry Ferguson, follows the same basic plot as the original – the hero Jonathan has become the most popular player in the game, he begins to doubt its purpose, his best friend is killed, he defies the corporation, and there is a climax where he is placed in a game with no rules. The ensuing twenty-seven years between the two films has allowed a few changes to come in – there are now women and a greater number of ethnic players. The most radical of the changes is that the remake ditches the future setting. The film could almost be set in the present, as the opening scenes in San Francisco would seem to indicate. Rather than a corporate-ruled future, the remake has interestingly been set across the milieu of the near lawless states of the former Soviet Union.

The changes have stripped Rollerball of its message content and streamlined it into a modern action film. Out entirely has gone the issue of Jonathan standing up against the system for his individuality. The original’s theme of the struggle for individuality has merely become a humdrum anti-media tub-beating message – in place of the stand in favour of individuality, there is a far less interesting message about one player standing up against a corrupt corporation and its exploitation of the players for ratings.

However, this is something that the film never manages to find anything particularly interesting to say about. McTiernan and his scriptwriters have also extended the ending of the original with a series of appallingly pat and cliched scenes where the Russian peasants rise up and overthrow their corrupt capitalist exploiters. Ironically, the remake suffers from exactly the same hypocrisies that the original did – that to make a film about the corrupt use of cathartic bread and circuses violence to pacify the masses, it has to resort to making a film that appeals to the same violent instincts in its audience.

As the action film it has now been turned into, Rollerball is dull. The plot is not particularly well developed – the corporate conspiracy angle is given surprisingly little development, rather it seems than John McTiernan wants to spend his time throwing in scenes with the heroes racing full-length skateboards, fast cars and a motorcycle chase sequence across the snowy Russian roads (which for some reason are all shot in sickly green light of a nightscope).

The climactic game comes with surprisingly little in the way of affect. There is more emotion invested in the subsequent revolutionary overthrow, which McTiernan at least directs with some liberatingly violent affect. Rollerball is a disappointment from John McTiernan who directed some of the top action films of the 1980s and one that fairly much killed off his career.