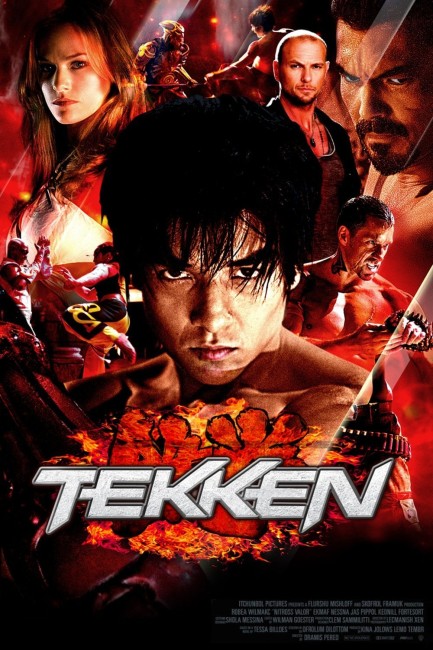 It is in the future. Following the collapse of society, the world has been divided up into sectors ruled by corporations. Each year, the Iron Fist tournament is held among the corporations where selected fighters from each bloc come together in competition. This year it is the turn of Tekken City, ruled over by Heihachi Mishima, the creator of the Iron Fist. In The Anvil, the anarchic wastelands outside Tekken City, Jin Kazama is a fighter who has been trained by his mother. Jin steals a piece of hi-tech Tekken equipment for the rebels but this has him hunted by the Jackhammers, the elite soldiers headed by Mishima’s son Kazuya, who break in and kill Jin’s mother. Burning with vengeance, Jin signs up for the Iron Fist open call from which one fighter has the chance to be selected for the competition. Against the odds, Jin succeeds in beating his opponent. Taken inside Tekken City, he is placed into competition up against the world’s top fighters where he succeeds in holding his own. He is also attracted to female fighter Christie Monteiro. However, Kazuya knows secrets about Jin’s past and seeks to have him eliminated. To this extent, Kazuya usurps control of Tekken from his father and now decrees that the fighters compete to the death.

Tekken (a phrase that translates into English as Iron Fist) was originally an arcade videogame from the Japanese company Namco and first appeared in 1994. Tekken is a two-player game where players can choose from among a variety of character roles and engage one another in martial arts tournaments. There have been six different Tekken game releases since then, most of these designed for the Playstation, as well as a number of spinoff games. The popularity of Tekken has also seen releases in a variety of other media, including a game card series, a manga comic-book, a number of cd releases of the music from the games and a previous hour-long two-part OVA anime, released in the West as Tekken: The Motion Picture (1998) and the subsequent full-length anime film Tekken: Blood Vengeance (2011).

On screen, Tekken remains disappointingly generic in all respects. It is indicative that even though the film was designed for cinematic release, it ended up being released directly to dvd in most territories. The background is a generic socially collapsed future – the film borrows the idea from Rollerball (1975) of the world being dominated by corporate blocs as background for gladiatorial games but does absolutely nothing with this idea beyond mentioning it.

The plot involving a combat tournament between various player characters from the game has been used in a number of other videogame adapted films – Mortal Kombat, DOA: Dead or Alive – which is in turn taken from the template created by Bruce Lee’s Enter the Dragon (1973). The central character of the kid who is a rank outsider and rises to the top of the competition by sheer skill is borrowed from The Karate Kid (1984).

The film has almost exclusively been designed around the various fight scenes with the barest minimum of fleshing out of characters beyond that. French action choreographer Cyril Raffaelli, best known as the hero in Banlieue 13 (2004), has been employed to choreograph the fight sequences. They are essentially all there is to the film – anything beyond that is only developed in the most minimal way. Yet the very slickness of the commercial packaging leaves the action scenes feeling so bland that there is nothing you remember about any of them by the end of the film. Hero Jon Foo at least plays with a liveliness and charisma. He seems too young to take seriously but certainly has more animation and personality than the better known Jet Li.