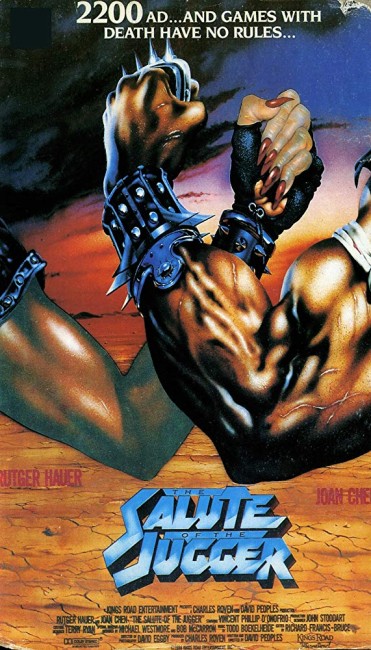 aka The Blood of Heroes

It is some time after civilisation has fallen. A band of juggers roam the landscape, challenging small village teams to competition in a brutal game that is a combination of football and gladiatorial combat. In one of the villages, they take on a new team-mate Kidda. As she becomes involved with the team’s leader Sallow, Kidda learns of how Sallow was a top jugger but was banished from the cities because of an affair with the woman of an Overlord. She pushes Sallow and the team to make a return to compete in the city leagues.

The Salute of the Jugger, which was retitled The Blood of Heroes in the US, is an interesting and unusual variation on the standard Mad Max 2 (1981) copy. For a start, its director David Peoples was responsible for such estimable screenplays as Blade Runner (1982) and Twelve Monkeys (1995), not to mention non-genre work like the Oscar-winning script for the Clint Eastwood Western Unforgiven (1992).

It is a post-holocaust film where much more effort and focus has been placed into the world it inhabits than the action scenes. Some of David Peoples’ dialogue has a considerable poetry – names like ‘Elegant Ladies’, ‘a hundred stones’, ‘the Nine Cities’, a description of “silk as soft as wind on your cheek” – that rolls on the tongue with resonant imagery.

The film that The Salute of the Jugger resembles most is Robert Altman’s Quintet (1979), which similarly centred around an invented post-holocaust game (whose rules were never spelt out to the audience) and was set against a complex and densely detailed but deliberately never explained decayed future. The Salute of the Jugger shares exactly the same problems that Quintet did – the fact that the audiences are not privy to the rules of the games in either film makes empathy a hard job. One could call both The Salute of the Jugger and Quintet more interesting films than necessarily accessible ones.

Where The Salute of the Jugger differs from the average Mad Max clone is that here the densely textured post-holocaust backdrop of the Mad Max films is played for a gritty realism rather than comic-book action. The texture has been made even more intensive here, at times downright strange. David Peoples litters the film with incongruous images – Gandhi MacIntyre for no apparent reason wears a small duchess on his back; at another point, someone in a foreground shot is seen picking their teeth with a key ring. Some of the design work in the Red City is strikingly surreal.

The Salute of the Jugger/The Blood of Heroes was marketed as a Mad Max clone and, despite the lack of understanding of the film that this demonstrates, selling it as a futuristic action film is in essence a correct move, for the place where the film does engage one is not so much in its complex and enigmatically withheld future backdrop and mystifying game but in capturing the same emotions that essentially fuel all team sports movies – the desire to see a team win against the odds that are stacked against them. As such, the film engages one reasonably effectively.

Rutger Hauer gives a performance that is typically tough and phlegmatic. The one to watch though is Joan Chen, a tough and alert fighter – she seems to be doing her own stunt-work and moves with an impressively lithe and balletic dexterity.