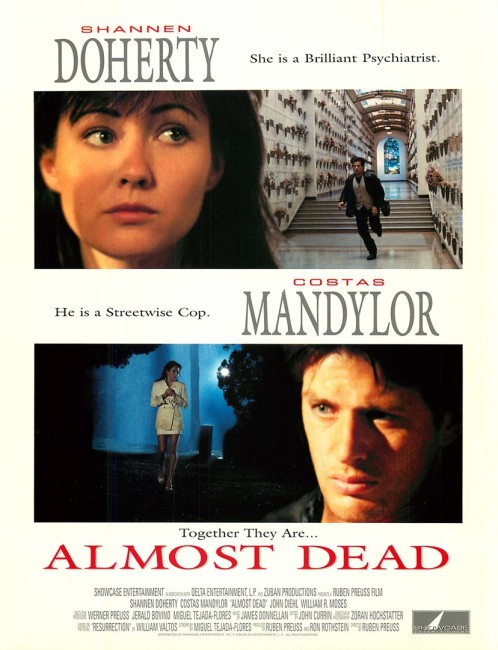 It is four years after the death of psychological researcher Katherine Roshak’s mother in a bomb explosion at a motel. Now Katherine suddenly believes she is seeing the ghost of her mother everywhere. After making a complaint to the police, Katherine is paired with a burned-out cop Dominic de la Sera in an effort to get to the bottom of the haunting.

Almost Dead is a thoroughly insipid ghost story that was released directly to video. The pace is deadeningly slow and little happens. There proves to be nothing scary whatsoever in the sight of the film’s would-be ghost – an overweight, middle-aged woman in pasty face who blankly stands about.

The plot offers up some silly writing – at one point, Shannen Doherty is arrested as “a material witness” to a murder. On the plus side, there is a reasonably effective twist ending, which reveals the haunting to be of mundane cause. (Although this is followed by a silly coda that reveals there is a ghost after all as a shovel held by invisible hands fills the mother’s grave).

Former Beverly Hills 90210 (1990-2000) star Shannen Doherty makes no attempt to act at all – she just radiates a perpetually bitchy and hostile presence every time she appears on screen. There is a reasonable supporting cast line-up, although none of them are given anything to work with.