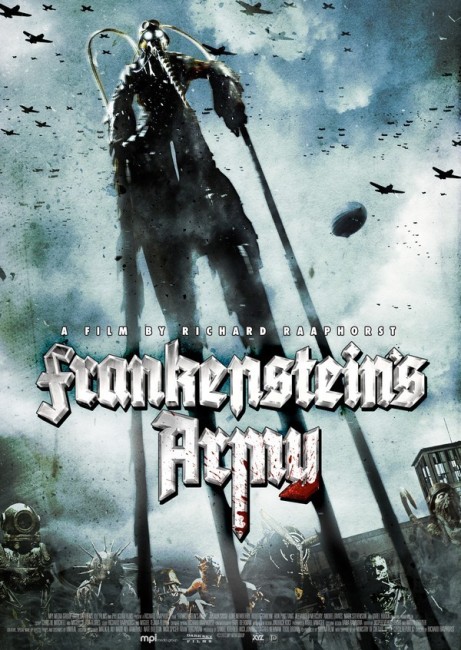 During the middle of World War II, a troupe of Soviet soldiers venture behind German lines accompanied by Dimitri, a documentary-maker who is recording everything on film. They seek refuge at a factory only to find it filled with bizarre phantasmagoric creations that have been stitched together, combining flesh and machine parts. Their numbers are quickly eviscerated by the creatures. As they venture down into the labyrinth of the factory, they discover this is the laboratory of Dr Frankenstein’s descendant who is creating an army of monsters that have been raised from the dead and radically modified.

Frankenstein’s Army – not to be confused with the US-made Army of Frankensteins (2014) that came out not long after – is a debut feature film for Dutch director Richard Raaphorst. Raaphorst had previously worked as a conceptual artist, in particular on Brian Yuzna films that specialise in way-out creature effects such as Faust: Love of the Damned (2000), Beyond Re-Animator (2003) and Rottweiler (2004), as well as the Yuzna produced Dagon (2001) and fellow Dutch director Paul Verhoeven’s Black Book (2006).

When I first heard of the idea – that of a Found Footage Frankenstein film – I did a double take. Given that any authentic version of the Frankenstein story would have predated the invention of the movie camera (the Mary Shelley book was written in 1816, the first movie camera was not built until 1895), this seemed to be stretching a little too far in the search for new and interesting genre subjects for the creatively fatigued Found Footage genre to overhaul. Funnily enough though, the idea of the Found Footage Frankenstein film was also conducted the same year by The Frankenstein Theory (2013), although that was able to get around the problem by focusing on a research team in the present-day searching for the monster. Frankenstein’s Army smartly deals with this by moving the location to World War II and featuring a descendent of Dr Frankenstein, with everything being shot by a Soviet army documentary-maker.

Even so, it took me some time to get into Frankenstein’s Army. Every so often a certain lack of credibility punctures the suspension of disbelief. For one, if you look at Soviet propaganda films from the 1930s and 40s, they are shot on big, bulky, static cameras in black-and-white that usually required a lot of lighting, not in colour and natural light with the fluidity of digital handheld cameras. (A far more authentic recapturing of this era’s films can be seen in the Russian First on the Moon (2005), a mockumentary about a supposed Soviet Moon landing). Even if you are prepared to dismiss that, there are other parts that make you raise your eyebrows such as a member of the Russian army who is Asian (Hon Ping Tang) for no reason that is ever explained (the Soviets were not exactly known for embracing diversity). Or for that matter, certain modern colloquialisms that slip into the Soviet troupe’s talk – would members of a Soviet army be using terms like “over” in their radio despatches, for instance?

Nevertheless, there comes a point where Frankenstein’s Army turns into something else altogether. This point comes when the soldiers arrive at the factory. There is the sudden outlandish appearance of a series of monstrosities – a blind, feeble and heavily scarred thing with mechanical prostheses attached to its body, followed by even more bizarre things that have scythes for hands and another that looks like it has a brass boiler for a torso that has been turned into a fiercely chomping set of jaws.

Thereafter, Frankenstein’s Army enters into the realms of the genuinely phantasmagoric. The film has largely been construed as a vehicle for Richard Raaphorst to go crazy in terms of coming up with wild and outlandish monster creations, which are some of the most original and way out to feature on a cinema screen in some time. The film functions more like a Halloween haunted house show in effect – the soldiers travel from one room to the next and out of each pops another out of this world creation. One with a German Stahlhelm helmet that has bayonets for stilts and a massive drillbit where its mouth is; another with no head, just a steel tank of a body and buzzsaws for hands; another with what looks like the propeller from a small airplane for a head; Karel Rodin’s Frankenstein being accompanied by an assistant that is an R2D2-like robot that looks like a cast iron cauldron with a set of legs; even where Frankenstein has attached a still living women’s head to a teddy bear’s body. The latter half of the film consists of not too much more than the display of these creations but definitely marks Richard Raaphorst as a talent worth watching out for.

(Winner for Best Makeup Effects at this site’s Best of 2013 Awards).