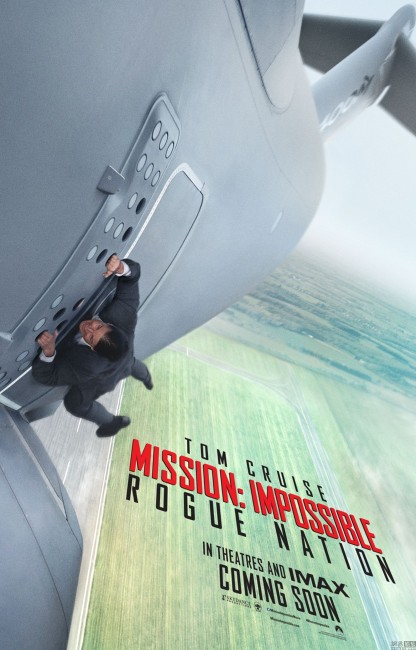 Ethan Hunt has been working deep undercover in search of a secretive terror organisation known as The Syndicate. Captured by members of The Syndicate who have infiltrated the London IMF cell, Ethan is tortured but freed by one of their operatives, the mysterious and alluring Ilsa Faust. Meanwhile, the existence of The Syndicate is ridiculed before a congressional panel by CIA director Alan Hunley who claims Ethan’s recklessness as an opportunity to shut down The IMF. Hunley then has Ethan listed as a wanted fugitive. In hiding, Ethan sends Benji an invite to the opera in Vienna where they attempt to stop a planned assassination of the Austrian Chancellor by The Syndicate. During the course of this, Ethan encounters Ilsa again and makes an escape with her. He discovers that she is an operative for British Intelligence, although others warn that she cannot be trusted. They mount an operation to steal a flash drive containing an encrypted list of Syndicate operatives from a power station in Morocco. The Syndicate abduct Benji and demand in return for his freedom that Ethan unlock the drive, something that can only be done by abducting the British Prime Minister.

With each of the films, Cruise seems to like taking a chance on unknowns in the director’s seat. In particular, he allowed J.J. Abrams, previously only a tv producer, to make his directorial debut with Mission: Impossible III and then gave Brad Bird, previously only an animation director, a chance with Ghost Protocol. In this case, he hands the reins over to Christopher McQuarrie. McQuarrie is better known as a screenwriter and has written other Cruise scripts such as Valkyrie (2008), Edge of Tomorrow (2014) and The Mummy (2017) and has done script work for Bryan Singer with The Usual Suspects (1995), Valkyrie and Jack the Giant Slayer (2013). McQuarrie made his debut as director with The Way of the Gun (2000) and then made the quite reasonable if box-office underperforming Cruise vehicle Jack Reacher (2012).

For me (and I think most people), Mission: Impossible III was the point where the Mission: Impossible films started to move out of the entertaining into superbly polished action and stunt vehicles. McQuarrie takes the formula that has served the series since MI:III. The film is driven by a series of spectacular set-pieces – the opening scene with Tom Cruise clinging to the door of a plane as it takes off; the fights around the backstage of the Vienna Opera; a high-speed vehicle and motorcycle chase around parts of Morocco; and especially the big dramatic set-piece where Cruise must make a dive into the interior of a turbine.

The minus side is that we get a well polished Mission: Impossible film but also one that feels like it remains in the shadow of but never eclipses the preceding entries. There is never anything among the action scenes that are as spectacular as the images of Cruise hanging on the side of the Burj Khalifa or the break-in to The Kremlin in Ghost Protocol; the motorcycle stunts or the freefall rock climb in MI:II; the raid on the convoy and fulcrum swing in MI:III. The sequences here are slick but all, with the exception of the jump into the turbine, disappear into the forgettable. Brad Bird went to town on the improbably over-the-top and outrightly science-fictional gadgetry in Ghost Protocol, which made the film the fun it was, but Christopher McQuarrie had dialled back on this to the extent that Rogue Nation must sit as a marginal genre entry. (I did however like Simon Pegg’s opera program that handily converts into laptop replete with granulated graphics). It is not that Rogue Nation is not enjoyable; it is just that Ghost Protocol made it a hard act for anybody to follow. I think Rogue Nation would have worked superbly if it came after MI:II and before MI:III but coming as the fifth film in the series it feels a backstep.

The other complaint would be that the film suffers an excessively complicated plot. Things happen, we visit locales, action sequences occur but it is never always clear why – I had to sit down and scratch my head and think why it was they had to conduct a dive into the midst of a turbine in Morocco. You ever so slightly get the feeling that this is a film driven more by the spectacular set-pieces than by the plot holding it all together.

One might also gripe about the subtitle Rogue Nation, which suggests a country gone amok and threatening the world, a term that has been applied to real life countries such as North Korea or Saddam-era Iraq, but we never get such. There is brief mention of how The Syndicate is creating a shadow nation of former agents but it seems a stretch to apply this to the title. The other complaint is the idea of The Syndicate as the anti-IMF, which I think is a fantastic nemesis for one of these films but this is underwritten and emerges as nothing more than another standard bad organisation – they seem to be arranging accidents and assassinations around the world but we never learn why. All the organisation comes down to at the end is no more than perennial British bad guy actor Sean Harris playing with a funny voice. If you remember how the Bond series built up SPECTRE or The Man from U.N.C.L.E. (1964-8) created a nemesis out of T.H.R.U.S.H., this seems pallid in comparison.

Moreover, Harris, who is supposed to be the big bad guy disappears into merely another member of the supporting cast and lacks any of the stature that Philip Seymour Hoffman presented as a villain in MI:III. He even gets outshadowed by Simon Pegg, Jeremy Renner and Alec Baldwin. (If nothing else, this is one of the first films that places the emphasis back on the mission being conducted by a trained team like it was in the tv series as opposed to making them into star vehicles for one actor). Rebecca Ferguson makes for a lithely sexy and morally ambiguous presence opposite Cruise – although she could have done with more of the smouldering sexuality that John Woo gave MI:II, whereas Christopher McQuarrie leaves the attraction between them simmering without ever coming to a boil.