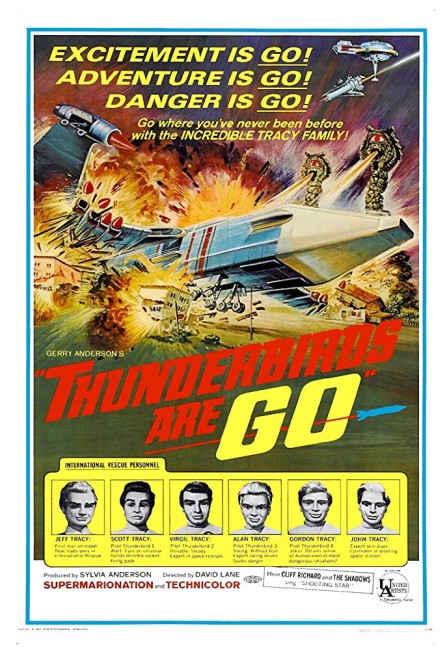 Zero X, the first manned Mars expedition, is launched. However, it is sabotaged before it even leaves the atmosphere by the international master-criminal The Hood. A second Zero X mission is planned but people are dubious until International Rescue, a hi-tech disaster aid organisation run by the Tracy family from a secret island base, agree to act as security for the project.

Thunderbirds (1965-6) was the cultiest of the various puppet tv series from Gerry Anderson (1929-2012). Anderson and his wife Sylvia emerged in the 1950s with puppet series such as Torchy the Battery Boy (1957), The Adventures of Twizzle (1958), Four Feather Falls (1960), Supercar (1961-2) and Fireball XL5 (1961-2), which all marked a gradual move from children’s shows to young adult techno-fantasies. Bursting into colour, Anderson had considerable success with Stingray (1963-4) and then peaked with Thunderbirds, which was a huge transatlantic hit. Anderson then went onto the lesser successes of Captain Scarlet and the Mysterons (1967), Joe 90 (1968) and the part-live, part-puppet flop The Secret Service (1969). After that, the Andersons abandoned puppet-making for live-action with the sf film Doppelganger/Journey to the Far Side of the Sun (1969), the detective series The Protectors (1971-2) and the popular science-fiction series’ UFO (1970-2) and Space: 1999 (1975-7). Following his divorce from Sylvia in 1977 and a number of aborted projects, Anderson made a solo return to puppetry with the likes of Terrahawks (1983-6), Dick Spanner P.I. (1986), Space Precinct (1994-6) and Lavender Castle (1999), efforts that have only looked back at past successes and met with mediocre reception.

There is a cult that surrounds Gerry Anderson. A great fascination of Anderson’s series was the models – their wonderfully imaginative designs and functionality – and the pseudo-technobabble. Some people love the bizarre puppet movements – you have never experienced life until you have been at a convention with an entire room of people marching like Anderson puppets and reciting Thunderbirds technical dialogue, while there was a celebrated mime show Thunderbirds FAB that toured in the 1990s doing a comic parody of Anderson puppetry.

Thunderbirds Are Go was the first of the two feature films that the Andersons spun off during the height of Thunderbirds mania. I suppose it would be fatuous to call the film wooden-headed but after one sees two or three episodes of the tv series (or any other Anderson series for that matter), the endless scenes of puppets conducting countdowns do become a bit predictable. The film has the feel that it would be better off on the small-screen than the large.

This was something the second film, Thunderbird 6 (1968), succeeded in transcending much more successfully. The sequel was much better sustained dramatically, but here the suspense is piecemeal and the central narrative irregular. The Thunderbirds are not that well linked to the Zero X story and the story becomes somewhat bent out of shape in having to introduce series regulars like The Hood and Lady Penelope – The Hood is not much of a threat and it is never particularly clear why he is trying to sabotage the Zero X, while there has been included a contrived car chase sequence in the middle for the sole purpose of introducing Lady Penelope, Parker and the pink Rolls-Royce.

The stars of the show are in fact the models – the introduction of the Tracy Brothers over the opening credits is each preceded by the models they fly, for instance. The Zero X scenes reveal what the Andersons did best – making models and blowing them up. The opening scene with the unveiling of the Zero X, with all of its elaborately detailed modular parts joining together and dwarfing the other tiny models on the airfield, is fabulous and is one part where the film takes maximum advantage of the big screen. On the other hand, there are also some unconvincing effects – the Pink Rolls taking to sea, the wire model of Alan swinging away from the Zero X at the climax.

The film never takes itself too seriously. The end credits are shown against The Royal Marines Marching Band doing a rendition of the Thunderbirds theme and then moving in formation to spell ‘The End’. The credits also thank the controllers of the film’s fictional Glenn Field for co-operation, note that “Martian sequences filmed by Century 21 Space Location Unit” and point out that “none of the characters appearing in this photoplay incidentally resemble any persons living or dead … since they do not yet exist.” There is also a puppet dream sequence that offers a bizarre mix of adolescent romanticism and Space Age dream where Gordon cavorts through space with Lady Penelope and ends up hanging from a crescent Moon before, no doubt symbolically, falling to Earth; also included are puppet versions of Cliff Richard and the Shadows, singing a number while hopping about on giant space-faring guitars.

Thunderbirds Are Go ended up being a box-office flop; nevertheless the Andersons produced a slightly better sequel, Thunderbird 6 (1968). There is some confusion about the Thunderbirds films as, during the 1980s, many episodes of various Anderson series, including Thunderbirds, were edited together as films and screened on tv under the umbrella title Supermarionation Sci-Fi Theatre. The reedited Thunderbirds tv movies are Countdown to Disaster (1981), Thunderbirds in Outer Space (1981) and Thunderbirds to the Rescue (1981). Thunderbirds (2004) was a big screen remake of the series with actors instead of puppets. The Thunderbirds were later revived in a CGI-animated tv series Thunderbirds Are Go (2015– ).