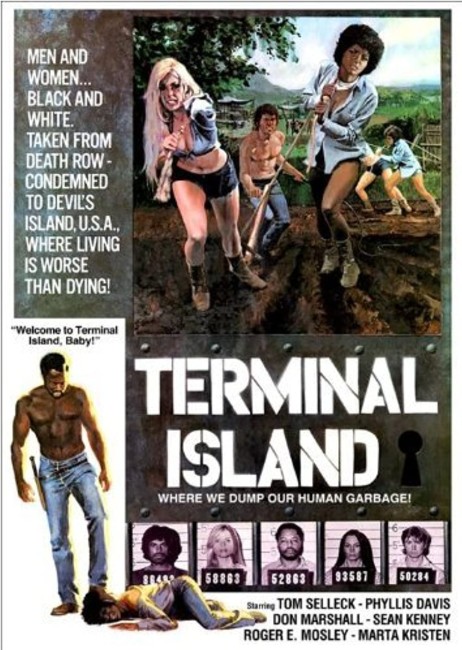 Some time in the future. Carmen Sims is sentenced to San Bruno Island off the coast of California, a prison where convicted murderers are abandoned by society. On the island, she is forcibly recruited into the encampment led by Bobby Farr where she learns that it is her duty, along with the other women prisoners, to service the sexual needs of the male prisoners and act as a workhorse. She and the women are liberated by a group of outcasts from Bobby’s camp and enjoy the freedom to be found amongst their rescuers. However, this pitches the two encampments into war with one another.

Terminal Island was one of a handful of low-budget entries made by Roger Corman protege Stephanie Rothman in the early 1970s. Rothman is a director who has attained a cult following. She was one of the first woman directors to work for a US studio. She began working for Roger Corman in the 1960s and first directed sections of Blood Bath (1966), followed by It’s a Bikini World (1967), The Student Nurses (1970) and The Velvet Vampire (1971), all for Corman’s New World Pictures. She and husband Charles Swartz were subsequently partners in the establishment of Dimension Films in 1971, which went on to release a bunch of exploitation films. There Rothman directed Group Marriage (1972), Terminal Island and and Working Girls (1974), as well as wrote Beyond Atlantis (1973). Alas, Terminal Island would be Rothman’s second to last directorial outing and she has since disappeared from sight.

Terminal Island is in the B-budget ghetto where it nevertheless works effectively. It noticeably uses the plot of the island prison that later became a staple sf/action movie theme in films like Turkey Shoot (1983) and, most closely to this, No Escape/Escape from Absolom (1994). However, Rothman uses the plot to far more serious sociological ends than either of these do.

There is an effective hard-bitterness to the dialogue – like the opening where Eva Hartman arrives on the island and is told “According to California State Law you are now legally dead … Sign this.” To which she replies “A corpse can’t sign,” to be greeted with an indifferent shrug, “It doesn’t matter.” Or when her whoring duties are explained to her: “Don’t we get to sleep?” “All you’ve got to do is lie back and fake it. No-one says you have to stay awake.”

Stephanie Rothman has clearly imbued the film with her own feminist undertow – the story is told through the eyes of the four women who are the ones who end up being responsible for the discoveries that help win the war. The film ends on an appealingly Utopian wish-fulfilment with the prisoners, having eliminated all the violent elements, finding their own redemption and going on to create a peaceful society on the island away from the rest of the world. There are many amateurish touches to Stephanie Rothman’s directorial hand but the plot hangs together sufficiently well to overcome such minor deficiencies.

The other interesting name on the credits is that of a young Tom Selleck who plays a convicted doctor. It would be a few years on before Selleck would gain the role that made him famous in tv’s Magnum P.I. (1980-8), while Roger E. Mosley who played the supporting role of T.C. also plays a part here. Barbara Leigh was once announced to star in a live-action Vampirella film. Marta Kristen played Judy Robinson in tv’s Lost in Space (1965-8).