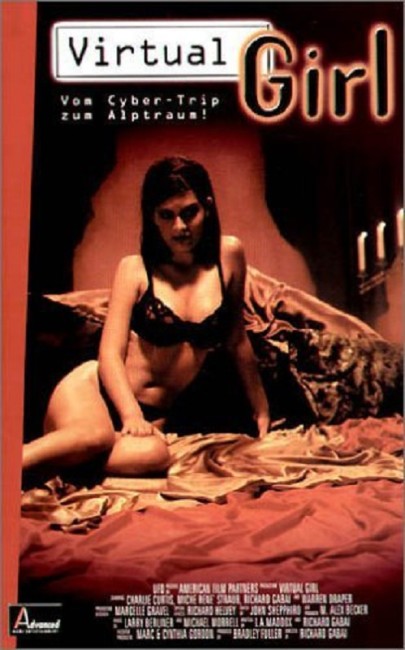 Programmer John Lewis is assigned to work out the bugs in the virtual sex program Virtual Girl, a job that he considers beneath him. Virtuality, the permanently sexually available female AI inside the program, offers herself to him but he has no time for her. However, due to his own wife Karen’s disinterest in sex, he finds himself being tempted. After he sleeps with her, Virtuality starts acting possessive and causing trouble that is clearly designed to split he and Karen up.

Virtual Girl is an oddly schizophrenic film. It was one of a host of films that came out in the 1990s taking up topical Virtual Reality themes and often selling themselves with the word ‘virtual’ in the title.

On the other hand, Virtual Girl is routine and unsatisfying as science-fiction. There are some enterprising low-budget CGI graphics inside the Virtual Reality scenario but the plot merely regurgitates the cliches begun after The Lawnmower Man (1992) of AI’s going amok. There are some occasionally unusual twists – like where the AI reveals that the woman who was her model has lied about details of the design (although why is never subsequently explained) and the improbably contrived revelation of what is going on. As usual, the Virtual Reality scenes and the AI have been ridiculously anthropomorphised – the stabbed AI has the grandly campy exit line: “I bleed – I must be real.”

There are a few amusing notes for inveterate credits watchers:– a credit for ‘Spiritual Advisor’ and ‘Location Manager – The Man, Arthur Fonzarelli’. The end legal disclaimer goes “… unauthorized copying may result in criminal liability. Go ahead and try something.” The most amusing credit is ‘Stunt Breasts Provided by Max’s Mobile Mammaries, Hollywood.’

Director Richard Gabai later made a sequel, Virtual Girl 2: Virtual Vegas (2001). He has made a number of other low-budget genre films, including the clairvoyance thriller In/Sight (2011), the psycho-thriller Imaginary Friend (2012) and In the Dark (2013) with a blind woman and her stalker. Gabai has also made a number of acting appearances, in particular appearing in several of the films of director Fred Olen Ray.