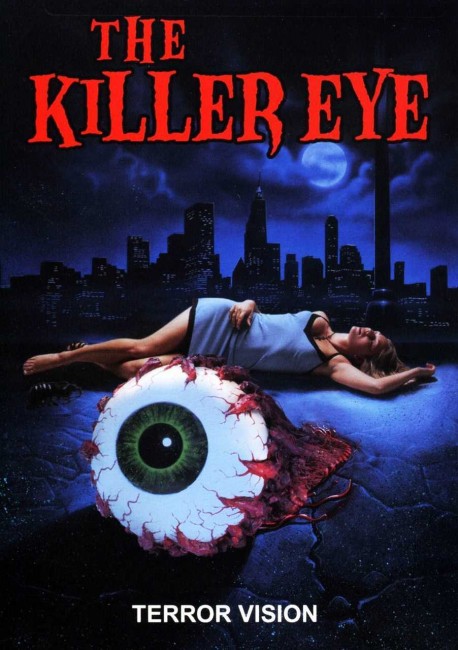 Dr Jordan Grady conducts an experiment, placing drops in the eye of a young street hustler he has picked up, something that will allow the subject to glimpse into the eighth dimension. However, the experiment goes wrong and the kid is killed by an alien force that possesses his eyeball. The eyeball grows to giant size and moves through the house, sexually teasing the unfulfilled women there.

The Killer Eye comes from Richard Chasen. Richard Chasen’s one other directorial credit so far is Voodoo Academy (2000), the first stupendously bad B film of the millennium. Richard Chasen is in fact a pseudonym of low-budget director David DeCoteau who made the cheap and ratty likes of Creepozoids (1987), Sorority Babes from the Slimeball Bowl-o-Rama (1987) and Test Tubes Teens from the Year 2000 (1994). (See below for a full listing of David DeCoteau’s genre films).

The Killer Eye belongs to a body of films that were all the fad in the late 80s/early 90s, which set out to be deliberately schlocky imitations of bad 1950s science-fiction films (the abovementioned DeCoteau films are prime examples). Most of these unfortunately ended up being simply bad films made with a cheesy cynicism. The giant eyeball here is at least a competently well done effect, while the acting tends to the terrible. (Most of the cast seem to affect Aussie accents even though the credits indicate the film was shot in L.A.). With enterprising economy, The Killer Eye is restricted to the single location of one house and never strays out of doors.

What is amusing about Chasen/DeCoteau’s films is their ludicrous underlying sexual symbolism. The Killer Eye gives the impression of trying to be a would-be made-for-cable erotic film (an area where Jacqueline Lovell has certainly found employ before). There are numerous scenes with the two women of the film – Jacqueline Lovell and Nanette Bianchi – naked and the eyeball caressing them into sexual deliria with its long single drooping tentacle (which also has the nifty effect of shooting tiny electric shocks to the nipples). Voodoo Academy proved hysterical with its underlying homo-eroticism, something that has become a recurrent element of David DeCoteau’s films.

Similar things overrun The Killer Eye – all the men in the film seem either sexually disinterested in the women or impotent – the most sexual interest ever demonstrated seems to be a husband impotently caressing himself as the eye erotically titillates his wife. There are underlying hints of homo-eroticism – the wife of the sexually disinterested scientist finding he has picked up a young pretty boy hustler for ‘use in his experiments’; or the two handsome studs who appear disinterested in the wife’s sexual overtures and who prefer to lie around in bed in their boxers getting stoned together. Indeed, the only non-female sexually vital force in the film is the eyeball itself, which seems to have, despite lack of sex organs or gender, the ability to tap the frustrated female libido. It all comes with lots of crashing symbolism about voyeurism.