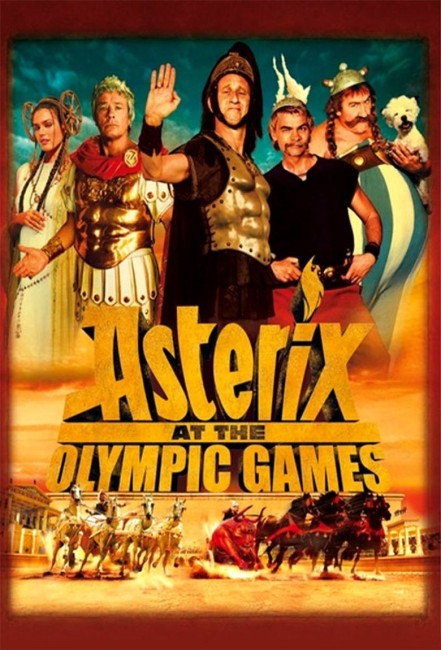 56 A.D. A tiny village in Gaul holds out against the Roman occupation all around them thanks to the druid Getafix’s magic potion, which gives the villagers super-strength. One of the Gauls, Lovesix, writes outpourings of love for Princess Irina, daughter of the Greek king Obnoxias. Having just conquered Greece, Julius Caesar’s scheming son Brutus desires to marry Irina. She cannot stand him and prefers Lovesix’s words instead. Lovesix sneaks into the palace and stands up against Brutus, claiming that he will prove he is the better man for Irina by winning the Olympic Games. After encountering the top Roman athlete Gluteus Maximus in the woods, Asterix and Obelix decide to enter the Games. There they end up winning everything. Brutus decides to even the playing field by banning the use of magic potion. He still proves a total disaster at every event but wins by bribing the judges. Asterix asks Julius Caesar if Rome wants to be held in ridicule as a nation of cheats and Caesar orders a stop to this. Brutus then kidnaps Getafix to get a cauldron of magic potion for himself. Using this, Brutus seems set to win every event.

The stories of Asterix the Gaul have a popularity the rivals only that of fellow Francophone comic-book hero Tintin. The Asterix stories began with Asterix the Gaul (serialised in the magazine Pilote in 1959, then released in the familiar large-sized book format in 1960). The series extends to 38 books to date – 24 of these were produced by co-creators Rene Goscinny and Albert Uderzo, while Uderzo produced a further ten books on his own following Goscinny’s death in 1977 and four books by other writers. The Asterix books centre around a tiny unnamed village in Gaul (as France used to be known during the Roman occupation). Following historical events vaguely, the villagers maintain a cheerful resistance to the Romans, which usually consist of the quick-witted Asterix and his large, dumb companion Obelix beating up as many centurions as they can, something they regard as a sport. The Asterix comic books come with an enormous visual wit – none the more so than the names given to the characters (or at least in the English translations) – Vitalstatistix, Getafix, Geriatrix, Valueaddedtax, which all pun on Roman and Gaulish suffixes.

Asterix has enjoyed a healthy life on the big-screen. The French animation company Dargaud made a series of animated films – Asterix the Gaul (1967), Asterix and Cleopatra (1968), The Twelve Tasks of Asterix (1976) – the latter two both being co-directed by Goscinny and Uderzo – Asterix Vs Caesar (1985), Asterix in Britain (1986) and Asterix and the Big Fight (1989). There have been several animated films from other companies with Asterix Conquers America (1994) and from the French M6 Asterix and the Vikings (2006) and then the CGI-animated Asterix: The Mansion of the Gods (2014) and Asterix: The Secret of the Magic Potion (2018).

In recent years, there have been a number of live-action Asterix films with Asterix and Obelix vs Caesar (1999) and Asterix and Obelix: Mission Cleopatra (2002) of which Asterix at the Olympic Games is the third of these and would be followed by Asterix and Obelix: God Save Britannia (2012). The only connecting aspect between each of the live-action films (apart from some supporting actors shared between two of the three films) is Gerard Depardieu as Obelix. Asterix was played by Christian Clavier in the first two films but is replaced by Clovis Cornillac here and Edouard Baer in the subsequent film. Indeed, with Gerard Depardieu being the only internationally well-known star name in the films, they end up becoming Obelix films more so than they do Asterix films.

Asterix at the Olympic Games was the first of the live-action Asterix films that I have seen. I grew up with the comic-books and was delighted in only the way that a fanboy can with the way the film approximates the visual look of the comic-books in live-action. There are all the familiar characters – the diminutive Asterix in his Mercury helmet; Gerard Depardieu (in a role that Depardieu was surely born to play) outfitted with Obelix’s striped blue overalls and massively rotund build carrying Dogmatix throughout. There are all the supporting characters from Vitalstatistix, Getafix and the much abused bard Cacofinix who all look just like they do on the page. The opening of the film even has a digitally animated magnifying glass zoom down on the tiny village of Gaul exactly like the opening panel of each comic-book. There are all the cartoon physics of the comic-book – Asterix and Obelix punching various Romans up into the air and knocking them out of their suits of armour and so on.

The story fairly closely follows the Goscinny and Uderzo original, from Asterix and Obelix entering the Olympics, the banning of the use of magic potion and tricking the Romans into taking it and then exposing them with their blue tongues. There are however a number of crucial differences between the film and comic-book. For one, the characters of Brutus, Lovefix and Irina do not appear in the comic-book (although Brutus does appear in a number of the other Asterix books). The film has essentially created the love triangle to hold everything together – in the comic-book, Asterix and Obelix merely come across Gluteus Maximus training in the forest and decide to enter the Olympics.

These additions produce some awkwardness – the film story tends to sideline Asterix and Obelix somewhat, allowing the Lovefix-Irina and particularly Brutus story to take centre stage. On the other hand, this seems to take place in shortcuts at times. Lovesix sets out on a mission from Gaul to Greece but the film never establishes how his infatuation with Irina and romance began without the two having met. He also simply turns up at the palace and then drifts off to the Olympics with the film glossing over the hows. These are plotting vagueries that would surely not be accepted were this a romantic film about the two characters.

Asterix at the Olympic Games is largely a slapstick film, but not unengagingly so – after all, this is exactly what the comic-books were. There are all the sight gags from the originals as well as a few modern interpolations – the Olympic Games are naturally tainted by doping scandals when the Gauls start using the magic potion; we have roadblocks set up to check for ‘chariot bombs’; there are appearances from a band of bards known as the Rolling Menhirs (a joke from another Asterix book); and a number of gags about the invention of ‘feet-ball’ and other sports, which include cameos from a number of popular European sports figures.

Maybe we did not need the gag about a lightsabre turning up in Doctorjekyllus’s laboratory, although there is a cute spoof of the love protestations beneath a balcony scene from Cyrano de Bergerac (1897), which becomes doubly witty in that the Cyrano role is being played by Gerard Depardieu whose first major international starring role was in Cyrano de Bergerac (1990). Again the series of plotting happenstances that lead to the normally dim-witted Obelix being the author of the letters to Irina is vague and he demonstrates no other romantic interest in her beyond this one scene.

Clovis Cornillac seems a little too wily and self-assured to be Asterix, although Gerard Depardieu gives a reliable performance as Obelix. The show is largely stolen by classic French actor Alain Delon as Julius Caesar, where Delon pinpoints with perfection the aloof and regally profiled Caesar that was drawn in the comics. The other fine performance comes from Belgian actor Benoit Poelvoorde, best known as the cheerful serial killer in the hilarious mockumentary Man Bites Dog (1992), who plays the role of Brutus with great comic gaucheness.