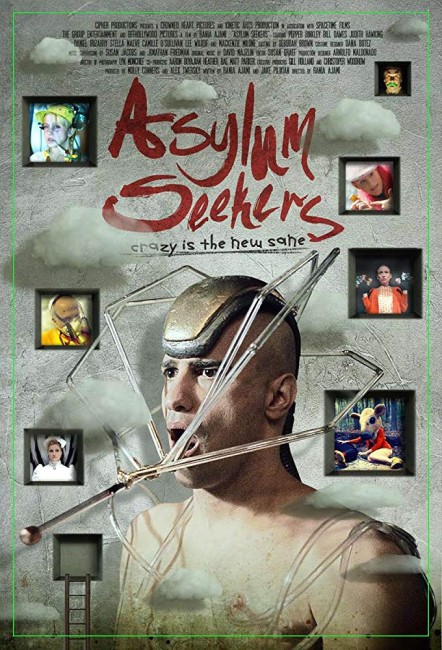 A group of six people are gathered at an asylum. These include the psychologist Dr Antoine Raby; the order-obsessed housewife Maud who has been sent there after faking a pregnancy; the paranoid gung-ho militarist Paul; the beautiful Miranda who thinks everybody is looking at her; the gender-bending hip-hop artist Alan; and the teenage cybergeek Alice. They are informed that the asylum is full and that there is only a single bed available and so a competition will be held to see which of them is the craziest and most deserving.

Asylum Seekers is a feature-length film debut for Rania Ajami, a Lebanese-American director. Ajami had previously made Shadows of a Leader: Qadaffi’s Female Bodyguards (2004) wherein she took the unusual step of travelling to Libya to make a documentary about the all-female retinue of bodyguards that protect (now former) dictator Muammar Qadaffi. This gained considerable festival play and a name for Ajami, although she is yet to make any other film subsequent to Asylum Seekers.

Whatever promise that Rania Ajami showed on Shadows of a Leader seems to have been entirely frittered away by the time of Asylum Seekers. It looks like nothing more than an amateur student film stretched out to an excruciating 90 minutes – this is a film that manages to keep playing off ‘going bananas’ and fruit analogies until it feels like it is beating the audience over the head with the pun.

It is a work filled with the horrendous ambitions towards making ‘art’ that besets too many student films – where everything is couched in obscure symbolism or takes place amid wacky designer sets in non-sequitir interactions. Most student filmmakers get this sort of thing out of their system during their early shorts and either learn to suborn their artistic pretensions within a more commercial framework, find they are unable to get further funding once they leave film school or else gravitate towards working in music video or commercials. Not many of them get to work these out at full length. Moreover, the commercial audience for such uber-out there student experimentalism is thankfully small.

The 2011 release from Breaking Glass Pictures seems determined to pitch Asylum Seekers as a horror film, which is entirely misleading, featuring as it does a cover with a figure having their head being cut open by a strange wire contraption (an image that has no equivalent anywhere in the film). There is the point where Asylum Seekers feels like it could be a gonzo fantasy that falls somewhere between Shock Treatment (1981) and Forbidden Zone (1982).

Alas, from the point it opens, Asylum Seekers feels like a mix of student artistic pretensions. In the first scene where all the people sit around the asylum waiting and bickering, it feels exactly like an improv exercise for a novice acting class where each of the actors have been assigned a role on a cue card and told to play their parts off one another. All that we end up with is a series of shrilly posturing caricatures that become annoying within five minutes.

Undeniably, there are times when Rania Ajami is on the verge of digging beneath to find something of more depth to each of the characters – especially when she flashes back to their individual pasts. There is also the appealing satiric premise that Asylum Seekers is founded on – that beds in the asylum are limited and that each of those present must compete as though in a gameshow to see who is the most deservingly crazy – which the film then promptly does nothing with.

Despite occasional moments of creativity, by the time the film comes to allowing each of the characters to perform their own song and dance or where everybody is in a room all in white and has managed to change personalities and especially the scenes with them all cavorting through the woods wearing plushy animal suits, your patience with whatever Rania Ajami thinks she is doing is stretched to snapping point. The film’s posturing, lack of plot and lack of clear guidelines for deciphering any of its overheated symbolism end it up in the realm of entirely unwatchable.

All of the characters are played at a shrill level of farcical caricature. Especially annoying in this regard is Daniel Irizarry whose performance seems to almost entirely consist of infantile baby imitations and horrendously over-acted grimaces. The one find among the cast is Pepper Binkley who plays with a pixieish freshness that shows she is capable of far more than this – one flags her as a promising name and looks forward to hearing more from her in future.