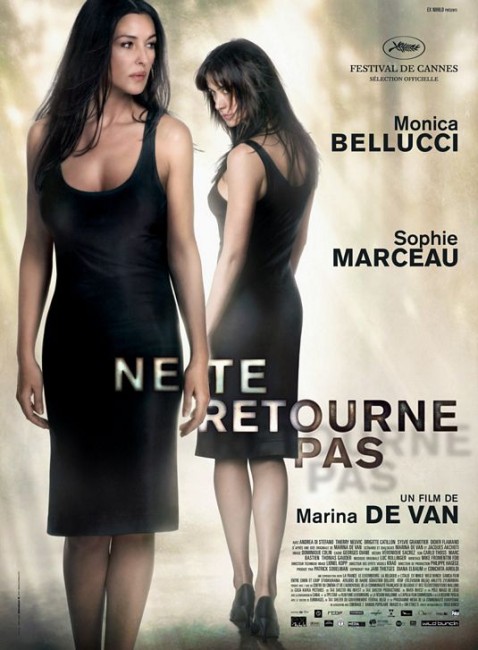 Jeanne, a writer of biographies, is trying her hand at fiction but is told by her publisher that her manuscript so far is awful. She begins to discover that things around her are wrong – at first finding the table in her apartment moved and seeing her husband Teo and children making strange hand movements. This becomes increasingly more disturbing to the point where she no longer recognises her apartment and finds that their faces have changed. In the middle of making love to Teo, she discovers that she is with a complete stranger even though he insists that he is Teo and is her husband. With everyone thinking she is having a mental breakdown, she flees – only to then find that her own face is one she no longer recognises. The answers seem to lie in the small Italian town of Leppe.

Marina de Van is a name that should have a better international profile than she does. De Van started out writing, directing and acting in her own short films. She did script work for Francois Ozon’s Criminal Lovers (1999) and 8 Women (2002), as well as Pascal Bonitzer’s Made in Paris (2006), making acting appearances in most of these too. Her most fascinating work came with In My Skin (2002), which she directs, writes and plays a woman who becomes obsessed with mutilating her own body. Don’t Look Back was her second film and she has subsequently made the fairytale adaptation Hop O’My Thumb (2011) and the English-language horror film Dark Touch (2013) about a young girl with psychic powers.

With Don’t Look Back, Marina de Van makes a fascinating film about identity blurring. This is a genre that we are more used to seeing in light fantasy body swap efforts such as Heaven Can Wait (1978), All Of Me (1984), Like Father, Like Son (1987), Vice Versa (1988) and so on. There has been a whole other series of arthouse films on the topic of bodyswap – Don’t Look Back often reminds of the identity blurring games in Robert Altman’s Images (1972), while David Lynch frequently touches upon such surreal exchanges of identity in films like Lost Highway (1997) and Mulholland Dr. (2001) and there was previously the French Lemming (2005), which trod in very similar territories to Don’t Look Back. In this vein, one is especially reminded of Alain Berliner’s Passion of Mind (2000), which had two Demi Moore’s on the either side of the world each dreaming that they might be the other. The work you are most reminded of however is Roman Polanski’s The Tenant (1976), which had Polanski as a mousy man who moves into a Parisian apartment and finds his identity being taken over by the previous tenant.

Marina de Van successfully replicates the same paranoid mood that Polanski did so well. I liked the increasingly Kafka-esque tone that she finds, the sense of the utterly inexplicable taking over someone’s life. You feel like you are in the midst of another version of Invasion of the Body Snatchers (1956) reconfigured as an arthouse film – indeed, the scenes of people with mismatched eyes makes you think of the then recent Body Snatchers reworking The Brøken (2008).

Marina de Van builds an incredible sense of dis-ease – beginning with Sophie Marceau’s certainty that the furniture in the apartment has been rearranged to finding that her husband and children are making strange hand movements on the camcorder and in reflections when she is not watching (an aspect that is never adequately explained).

Then comes the unsettling effect of seeing husband Andrea Di Stefano with one brown eye and one blue eye (the contact lens effects look somewhat unconvincing, which only leads to the eerie unnaturalness of the effect). This increases through images such as Sophie finding the scar on her leg has vanished, that she has different children and then her having sex with Andrea Di Stefano and suddenly realising in the middle of it that she is with another man altogether (Thierry Neuvic) who now insists that he is Teo and her husband even though she doesn’t recognise him.

The finest scene in the film is the one where Sophie Marceau goes to the casino, begging her mother for help, only to be ignored because her mother doesn’t want to leave the tables. As she sits on a couch at the side of the room, Sophie starts to undergo a breakdown. In the midst of this, we see her face transforming – it is impossible to tell if it is performance or CGI – and she suddenly emerges from the end of it transformed into Monica Bellucci. Indeed, the makeup and hairstyle has been subtly altered throughout the preceding scenes such that it is impossible to tell at which point the two actresses switched over and started playing the other.

The brooding lighting and photography during these scenes and Marina de Van’s creation of mood and sense of dis-ease and isolation is impeccable. Once the film heads to Italy, the paranoid identity puzzles disappointingly drop off and Don’t Look Back becomes something different. A story that at the outset seems rooted in surrealism becomes more of a mundane mystery as Jeanne tries to work out who she is.

The ending the film arrives at [PLOT SPOILERS] doesn’t make a whole lot of sense. It would appear that Rose took on the dead Jeanne’s identity and merged into her family. I am still puzzled how this relates to Jeanne having two separate parallel lives with children, a husband and mother who both have the same names yet are physically different. Or for that matter why she seems to have developed amnesia about what happened.

You could maybe see the film as some kind of confused split personality tale. The concluding scenes – with Sophie Marceau looking on invisibly as Monica Bellucci goes back to husband #2 and kids and then of the two women sitting side by side dressed identically and both typing on the computer as they complete the novel might seem to indicate this. However, de Van gives us no easy clues to work this out and it is an ending that baffles more than anything. By this point, the film’s initial story about a woman’s life and identity being occluded by another person’s life has splintered off into something else and been forgotten. It is almost an idea that seems too powerful for the film and one where Marina de Van fails to come up with an adequate third act to service it.