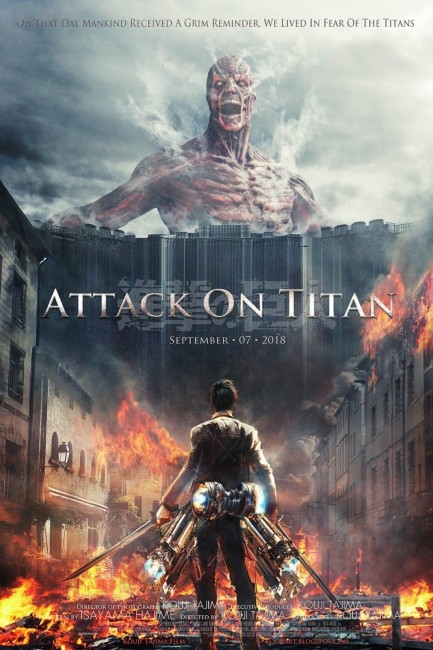 Following an attack by Titans, humanity has fled into enclaves built behind vast walls. It is now many years later. Eren leads his friends Armin and Mikasa up to the wall, not believing in the threat of the Titans. Just as they are stopped by the military, the wall is broken open by the Titans – giants with twisted human-like features. As the Titans rampage through the city, mindlessly picking up and eating the humans they catch, Eren and the others seek refuge, only for Mikasa to be snatched when she goes to rescue a child. Three years later. Eren and Armin have joined the military. Supplies in the inner circle are getting desperately low and the only hope is for an expeditionary force to go and blow up the breach in the outer wall and block entry by any further Titans. They set out with the last of the explosives, passing through land inhabited by Titans. In the open, their only defence is gas-powered wire riggings that allow them to fly through the air so that they can kill the Titans by striking the vulnerable part on the back of their neck.

Attack on Titan (2009– ) is a manga series created by Hajime Isayama. The series runs to seventeen volumes at the time of the release of the film and has received a great deal of acclaim. It was adapted into an anime tv series Attack on Titan (2013), which ran for 25 episodes, which were then edited into two film releases Attack on Titan: Crimson Bow and Arrow (2014) and Attack on Titan: Wings of Freedom (2015). There have also been several spinoff manga and a series of novels and videogames.

The way it sounds at face value, your natural assumption is that the title is some type of space opera presumably about action taking place on the sixth moon of Saturn. In actuality, what we have is something completely different – a work that operates as a fantasy (given the lack of explanations about what is happening – although the follow-up film to this does push things over into science-fiction). One suspects a literal translation of the Japanese title has led to some problems with the grammar – a more accurate English title that summarises the film would be something akin to ‘Battle Against the Titans’.

Attack on Titan has one of the best WTF openings of a fantasy film in some time. The three friends go up to visit the wall, disbelieving the stories of the Titans beyond because they have never experienced any in their lifetime, only to be stopped by the military – just as the wall is breached by vast lion-shaped figures made of fire and smoke, followed by a horde of naked misshapen giants that burst through. The WTF aspect continues as the giants move through the town, snatching people up everywhere, biting their heads off and devouring them. Part of the outlandishness of this is the weirdness of the Titans – all naked figures that are human but with misshapen faces and demented looks like the gleams of the imbecilic.

This sets the scene in fascinating ways, leaving us wondering what on Earth the world we are in is. After the great opening scene, the film skips forward three years to where the two male friends are now in military service and asked to take place in a sortie that goes out beyond the wall on a life or death mission. The complex story of the tv series has essentially been stripped down to all take place during this mission (which does lead to some confusion with the large number of supporting characters introduced that clearly have much larger roles in the manga/tv series but are reduced to not much more than walk-ons here). This stripping of the story is not that big a deal – it is to many who followed the manga and anime but I was not familiar with either prior to watching this film so don’t feel any onus in this regard – and largely it now consists of a series of extended action scenes, which comprise three-quarters of the film, as the team go into action against the Titans.

The most exhilarating of these are those with the group using a series of multi-directional zipline wires that allow them to fly through the air not akin to the way Batman or Spider-Man travel, all the while ducking around looking for the vulnerable spot on the back of the Titans necks to attack them. This also leads to the triumphal ending with the transformation of one of the characters into a Titan and pulverising all of the others into the ground.

Attack on Titan was made as a two-part film and was followed by Attack on Titan II: End of the World (2015), which was released seven weeks after this was, featuring the same cast and production personnel.

Director Shinji Higuchi had premiered with the J-pop fantasy film Minimoni The Movie: The Great Sweet’s Adventure (2002) and co-directed Lorelei (2005), an alternate history scenario about Japan winning World War II, before having a reasonable success with the disaster movie remake Sinking of Japan (2006), followed by the historical comedy The Floating Castle (2012).