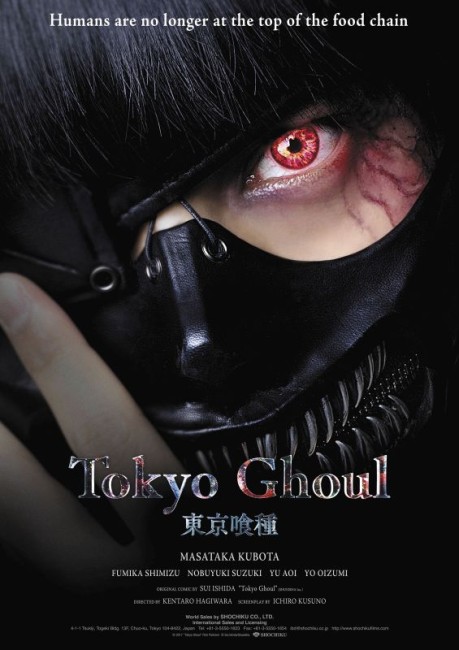 Japan is plagued by ghouls – creatures that feed on human flesh. The Commission of Counter Ghoul has been created to eliminate the threat. Shy teenager Ken Kaneki is approached by Rize Kameshiro, a girl he has been crushing on, and discover they both enjoy the same author. They agree to go on a date but on the way back Rize turns and attacks Ken, revealing that she is a ghoul. Ken is saved when she is killed by a piece of falling architecture. He comes around in hospital only to discover he has been given an organ transplant from Rize’s body, meaning that he is now a half-ghoul. Unable to eat normal food, Ken wanders the streets starving and spurned by other ghouls. He is then found by Anteiku, a society of ghouls sworn to live without killing who maintain a coffee house in the city. Welcomed by Anteiku’s leader Yoshimura, Ken becomes drawn into their society at the same time as two obsessed CCG agents follow a trail of clues leading from Rize to Anteiku.

Tokyo Ghoul was a manga created by Sui Ishida that ran in Weekly Young Jump between 2011 and 2014 and was followed by a second volume between 2014-8. This was adapted into an anime tv series Tokyo Ghoul (2014) that ran for twelve half-hour episodes, as well as a videogame and three light novels. Both the manga and anime follow the story of Ken Kaneki, a high-school teenager who becomes a half-ghoul after going on a date with the ghoul Rize Kameshiro only for her to be accidently killed and her ghoul organs are transplanted into his body. The saga then follows Ken’s struggles to fit into ghoul society while maintaining a day life as a regular teenager in high school.

As far as I can determine, the film does a reasonably faithful job of adapting and condensing the narrative of the manga into a 120-minute film. However, as with another manga/anime adaptation of recent, Full Metal Alchemist, the manga is stuck with an adaptation that does not do it service – an uncharismatic lead, an uninvolving story and CGI that suffers from too much Uncanny Valley.

The manga uses the idea of ghouls. Ghouls were originally creatures from Arabic mythology that are supposed to frequent graveyards in order to devour human flesh – although in English-language horror the word has been more commonly appropriated to refer to grave robbers or zombies. The film conceives of a ghoul as a creature halfway between a vampire and a zombie – like vampires, they are intelligent and only come out at night (although can move about in the day), while on the other hand they have a hunger not for blood but for eating human flesh. The film builds a somewhat interesting set-up with a complex secret world involving various factions of these creatures and government agencies formed to hunt them down.

On the other hand, Tokyo Ghoul fails to be an interesting film. The pace is slow and the characters and action scenes fail to engage one. It feels like a stolid, by the numbers traipse through the story without one’s pulse or engagement being activated in anyway. The worst part is the CGI effects wherein the ghouls manifest claws, tentacles, wings and such like. There is a certain amount of effort and imagination gone into these – especially at the climactic scenes – but crucially they never seem like real physical objects that interact with the environment around them. You can point to other films in the same vein like Tokyo Gore Police (2008) and Parasyte: Part I (2014) that do similar things. They are an example of how to make this work with often amazing results; whereas the CGI effects here and their lack of convincingly grounded realism are an object lesson in how not to.