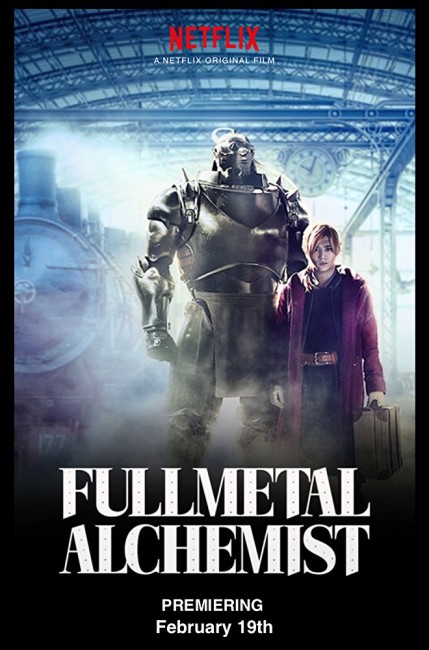 After their mother dies of an illness, brothers Edward and Alphonse Elric try to use alchemy to bring her back from the dead. However, this goes wrong and Alphonse is snatched through the Gate of Truth. Edward must make a deal with the gatekeeper and trades his leg and arm for Alphonse’s return. Even then, he can only incarnate Alphonse’s soul inside a suit of armour. His own arm and leg are replaced by automail. Some years later, the two brothers work as State Alchemists in Central City, fighting unlicensed use of magic. Through all of this, Edward hopes to find the fabled Philosopher’s Stone, the only item that will allow Alphonse to regain their human form.

Fullmetal Alchemist started as a manga, created by female artist Hiromu Arakawa in Monthly Shonen Gangan magazine in 2001 and running until in 2010 in a saga that fills 27 published volumes. Set in the alternate world of Amestris, the overarching story follows brothers Edward and Alphonse Elric and their search for the Philosopher’s Stone, which will allow them to regain their bodies – Edward having lost his leg and arm and Alphonse had his soul transferred into a suit of armour during their forbidden attempts to use alchemy to resurrect their mother. The brothers were employed as State Alchemists and encountered many foes throughout the saga.

It may be that something gets lost in the translation in adapting such a sprawling saga down to a single film. Or it may simply be, I suspect, that the material doesn’t translate that well to live-action. The elements are there – a substantial budget and international location shooting, some good CGI effects, good costumes and a faithfulness to the source material. However, Fullmetal Alchemist sits there and fails to get inspired.

One of the issues is the characterisation. The conflict between the two brothers is the emotional core and this emerges okay. However, cast as Edward, Ryosuke Yamada appears like a regular J-pop star who has been shoved in a costume and cowlick artfully slung across his face and resenting every minute of being there. The blonde hair dye job looks awkward and unsuited. Yamada’s lack of any charisma becomes a sinkhole that drags the film in around him whereas he should have been an heroically posed young hero. Equally, Tsubasa Honda plays Winry as another version of the annoying scatty-headed teenage girl characterisation that appears in much Japanese cinema.

There is one sequence with the two brothers fighting Father Cornello in the streets of a town (in actuality, location shooting in Italy) but this becomes distracting because all of the pillars of stone blasting out of walls, the tsunamis of paving stones, the monsters emerged out of nowhere behave in no way that ever seems to involve physics and disappear into an empty array of CGI eye candy scenes. Moreover, after this one action scene the film slows down right until its end. While the plot seems constructed as a quest, nothing much happens and it seems to take a very long time to do so.