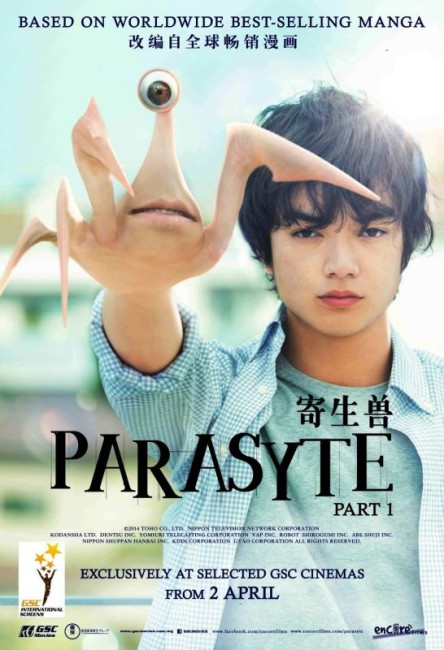 Parasitic creatures appear all over Japan, invading people’s ears and taking over their body after devouring their brains. High school student Shinichi Izumi is woken as a parasite tries to enter his nose but fights it off. The next day, Shinichi finds that a creature has instead taken over his hand and is capable of reshaping it, even developing eyes, a mouth and talking to him. Shinichi wants to be rid of Migi, as he calls it, but grudgingly allies himself with it. When they come across another of the parasites, it is contemptuous that Migi has not devoured Shinichi’s brain. A fight ensues and Migi is forced to kill the other parasite. They then discover that the new teacher at school Ryoko Tamiya is a parasite. She makes an offer for Shinichi and Migi to join them. When they refuse, she decides to keep the entire school as hostage. Next, one of Miss Tamiya’s offsiders takes over Shinichi’s mother’s body.

Parasyte was a manga created by Hitoshi Iwaaki, first appearing in Morning Open Zokan magazine in 1988 before moving to Afternoon magazine a few issues later. The series continued until 1995 and runs to twelve volumes in English translation. The manga concerns Shinichi Izumi, a high school student who is infected by a parasite that takes over his hand, the two forming a partnership as they fight the other parasites that are intent on taking over the Earth. Parasyte Part 1 was the first of two live-action film adaptations of the manga and was followed by Parasyte Part 2 (2015), released five months later. Premiering three weeks before the first film came out, there was also the anime series Parasyte – The Maxim (2014-5), which lasted for twenty-four episodes.

The film adaptation is handled by Takashi Yamazaki who had previously made the science-fiction film Juvenile (2000) before having some success with the time travel action film Returner (2002) and going on to the live-action big-screen remake of the anime tv series Space Battleship Yamato (2010). Yamazaki also made Stand By Me Doraemon (2014), an animated spinoff from the popular anime series, and had a series of hits with the non-genre family films Always – Sunset on Chrome Street. Subsequent to this, Yamazaki made a further manga adaptation Destiny: The Tale of Kamakure (2017) and the animated films Dragon Quest: Your Story (2019) and Lupin III: The First (2019).

Parasyte Part 1 plays out like a completely mad film. It could almost be The Thing (1982) reconceived as a typical manga/fantasy anime about a teen hero fighting otherworldly demon figures (it is never specified in the film what the creatures are, as was also the case in the manga, although you assume that they are alien in origin). There is a sense of complete outlandishness to the film from the opening moment where a man is invaded by a parasite while lying in bed and then moments later his entire face opens up like the sepal of a flower to devour his wife.

Shota Sometani is then taken over and finds his hand has developed a life of its own, extending of its own accord, grabbing Ai Hashimoto’s breast, borrowing the scene from Alien: Resurrection (1997) and throwing a perfect basketball hoop while his back is turned. Elsewhere it sprouts an eye and mouth of its own to hold conversations with him, while his entire wrist extends out to grab a lamppost and swing him around when they have a disagreement over which direction to go.

From there, Parasyte Part 1 becomes increasingly more outlandish. Particular standout is the blood-drenched scene in the Chinese restaurant where Shota Sometani and the chef fight as the parasites transform into wild blade attachments and tentacles to hack each other apart. And the similar scenes in the alleyway with Shota Sometani fighting Mr A. The only thing that lets it down slightly is the reliance on sometimes obvious CGI effects.