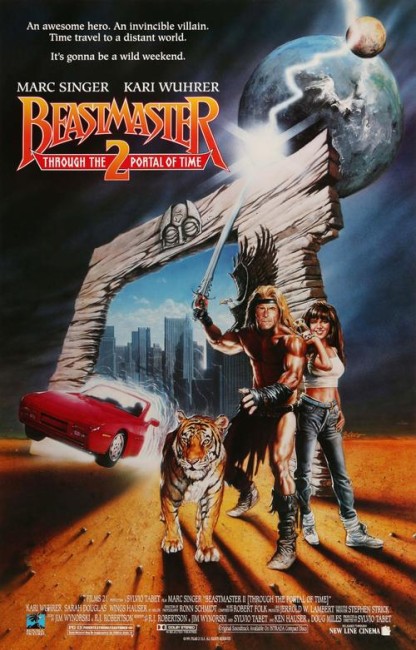 Dar the Beastmaster receives a prophecy that he must find the brother he did not know he had and defeat him, otherwise the world is doomed. Meanwhile, the warlord Arklon teams up with the witch Lyranna who shows him a portal to an alternate world – that of present-day Los Angeles. She persuades Arklon that he could become the most powerful person in the world if he were to obtain the neutron detonator. Lyranna’s attempt to open the portal accidentally transports rich girl Jackie Trent and her Porsche back through. Jackie encounters Dar after her car runs out of gas. Dar then realises that Arklon is his brother. Together he and Jackie pursue Arklon and Lyranna through the portal where Dar finds himself in the bewildering world of modern L.A. where even he is regarded as unusual.

The Beastmaster (1982) was a minor entry in the host of sword and sorcery cash-ins that came out after the success of Conan the Barbarian (1982). It attracted little attention at the time and was quickly forgotten by most soon after its release – all apparently except for producer Sylvio Tabet who retained the rights and then during the 1990s mounted this sequel, followed by a third cable-released film Beastmaster 3: Through the Eye of Braxus (1996) and a tv series The Beastmaster (1999-2001).

One is not pretending that The Beastmaster was a masterpiece – it was strictly ordinary – but by comparison Beastmaster 2: Through the Portal of Time makes it look like an all-time classic. This is one of the films that should never have been made from a conceptual standpoint. The idea of a Beastmaster sequel is not in itself a bad one but the idea of taking the character through the titular portal to contemporary L.A. is disastrous – it ruptures the tenuous envelope of plausibility that the first film created. There are some occasionally cute moments that come in Dar’s take on modern life – at riding in a ‘horseless carriage’ where his natural inclination being to climb through the window of a car rather than open a door, and encountering rock music – “It’s like an earthquake.”

However, the suspension of disbelief is punctured the moment we cruise past a theatre that is screening, according to the billboard, Beastmaster 3: Through the Portal of Time. When it comes to the climactic swordfight between Marc Singer and Wings Hauser in an arena where a never-seen announcer appears on the soundtrack with a fight commentary comparing the two to zoo animals, it is clear that this is a film that is not even trying to take itself seriously.

This could well be the hand on the script of Jim Wynorski, director of the likes of The Return of Swamp Thing (1989), Ghoulies IV (1993) and The Bare Wench Project (1999), whose every touch seems to drag a project down into campy unseriousness. Some of the dialogue is atrocious: Sarah Douglas’s remonstration to Wings Hauser “Chill out, Lord Dude,” being one line that particularly grated. Kari Wuhrer is awful, keeping up a running line of inane airhead natter the entire way through the film.