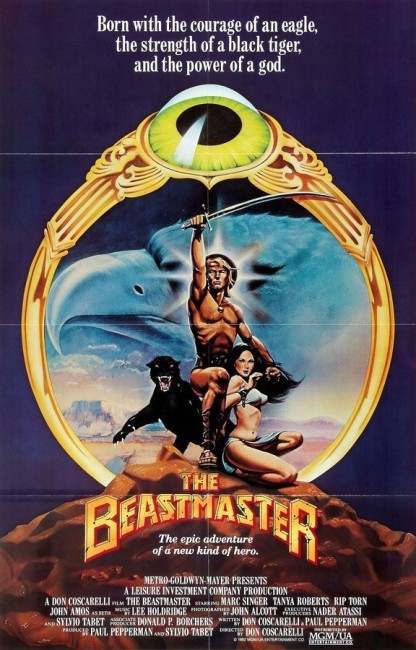 After receiving a prophecy that he will die at the hands of the king’s unborn child, the sorcerer Maax transfers the fetus of the child into the womb of a cow and has the cow taken outside the city to be killed. However, the cow’s slaughterers are interrupted and the child is saved. Named Dar, he is adopted by a farmer and grows up into a handsome muscular young man. The circumstances of his birth have left him with the ability to communicate with animals. When his adopted village is slaughtered by wilderness hordes, Dar sets out in revenge. He eventually comes to the city of his conception where Maax has usurped the king and instituted a cult of child sacrifice. Aided by the human and animal companions he has gathered along the way, Dar attempts to enter Maax’s temple and free his people.

The Beastmaster claims a tenuous basis in Andre Norton’s 1959 novel of the same name. In actuality, the only connection between the book and film is the concept of a hero who can communicate with animals – Andre Norton’s book is a space opera, while the film is sword-and-sorcery fantasy.

The more obvious source for the film is John Milius’s Conan the Barbarian (1982), which was released six months before this was, with The Beastmaster having clearly been pushed into production to exploit the newfound box-office interest in sword-and-sorcery. There are many plot similarities to Conan the Barbarian – both feature a muscle-builder hero on the warpath against a cult leader who destroyed his home and family. Unlike Conan, The Beastmaster is a routine affair – although at least Marc Singer plays with more intelligence and wit than Arnold Schwarzenegger ever did.

The Beastmaster was made by Don Coscarelli, a promisingly talented director who has made far too few films. Coscarelli previously made his impression on the genre with the mini-cult horror film Phantasm (1979). Phantasm, Phantasm II (1988) and Coscarelli’s later mini-masterpiece Bubba Ho-Tep (2002), show him as a talented director but Coscarelli lucked out here. (He has been vocal about his dissatisfaction with the finished film, much of which he puts down to producer interference).

The swordfights are routine, the fantasy backdrop is unimaginative, while the location photography lacks any sense of place. Moreover, the plot is slackly paced – the first half seems to consist of too many incidents with Marc Singer encountering characters in the wilderness. There seem too many trivial subplots going on, which drag the proceedings down when what the film needed was to bustle with pulp energy. It is far too long by half, none the more so than at the long, drawn-out climax. The most amusing part about the film are the priests who carry with them a set of hooked nooses to conduct ritual suicide by throwing the hooks up to hang themselves from the ceiling.

Producer Sylvio Tabet directed an abysmal sequel Beastmaster 2: Through the Portal of Time (1991), which transported Dar into the present day. This was followed by a only marginally better made-for-cable sequel Beastmaster 3: The Eye of Braxus (1996). Both sequels featured Marc Singer, an actor who has always seem caught halfway between being an action hero and a serious actor. A passable tv series The Beastmaster (1999-2001) followed, produced by Sylvio Tabet, with Marc Singer being replaced by Daniel Goddard.

Don Coscarelli’s other genre films are:- Phantasm (1979) and its sequels Phantasm II (1988), Phantasm III/Phantasm: Lord of the Dead (1994) and Phantasm IV: OblIVion (1998) set in a surreal world of dream horrors; Survival Quest (1988), a weak teenage wilderness brutality film; Bubba Ho-Tep (2002), featuring a middle-aging Elvis and JFK tackling a mummy in a retirement home, which is arguably Coscarelli’s best film; and the mind-bendingly hilarious John Dies at the End (2012). He also wrote-produced Phantasm: Ravager (2016) and produced Dead Night (2017).