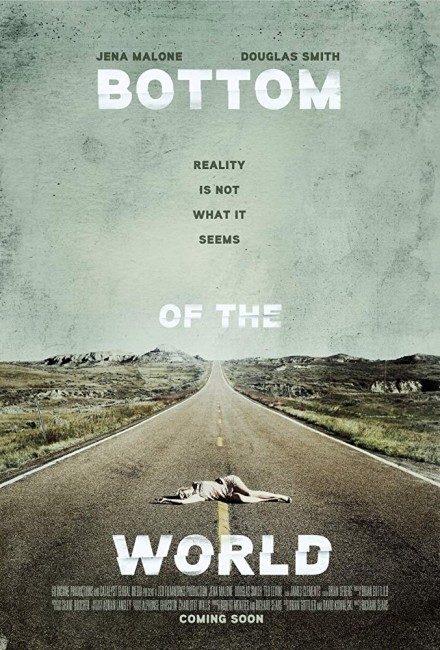 Alex and his girlfriend Scarlett are driving through the New Mexico desert to California They sign in for the night at the El Rancho hotel but Alex wakes in the morning to find Scarlett missing. His search for her becomes increasingly more surreal as he is abducted by a hooded man with a scarred face and taken to a mass burial site in the desert, He meets a preacher who keeps appearing on television and claims to be Scarlett’s father. Alex then wakes up to find this was a dream and he is now married to Paige. As he tries to puzzle over whether what happened was dream or if what he is now experiencing is a dream or even someone else’s dream, he finds that Scarlett is his next door neighbour. Even though she does not recognise him, he begins to obsessively follow her.

Bottom of the World was the third film from Richard Sears who had previously made Bongwater (1998) and In the Drink (2010). It is a film that you would normally assume would play at film festivals but its only recorded release was via the internet. Either of which says that it was considered too obscure for festival play despite featuring several moderately well-known names, especially Jena Malone and Ted Levine, or else that a pirated copy leaked and precluded any festival play.

The film starts out seeming like a road movie with Douglas Smith and girlfriend Jena Malone checking into the real-life El Rancho hotel, having sex and hanging out. She telling a disturbing story about physically and sexually abusing a handicapped brother. He wakes up in the morning to find she has disappeared. He is then abducted by a hooded figure with a scarred mouth and taken to an area of the desert that is filled with unmarked graves. A preacher (Ted Levine) keeps appearing on tv and then starts to address Douglas Smith directly. Douglas tracks the preacher down who reveals that he is Jena’s father.

The film then does a flip as Douglas Smith wakes up and finds he is now married to Tamara Duarte. As he passes through this new life, he discovers that Jena Malone is his neighbour and Ted Levine her father. He stalks her with the intention of finding who she is, something she seems to welcome. At this point, Bottom of the World has the vibe of something like David Lynch’s Lost Highway (1997) in its plot that conducts a mid-film flip that swaps the central character on us whereupon it draws the second character into a world where the woman from the first story turns up as a doppelganger of sorts. Hanging over the film is the question of what is real and what is dreamed – something that takes the film closer to Passion of Mind (2000) – or indeed if Douglas Smith is actually a character in someone else’s dream.

[PLOT SPOILERS] Eventually everything turns out to be a deathdream fantasy – the type of film where strange happenings are revealed to be visions had before the character wakes up and discovers they are dead. (See An Occurrence at Owl Creek Bridge (1961) of the Deathdream theme link below for details). Well sort of. Here it transpires that Jena Malone is the one undergoing not so much a deathdream but being visited by the brother that she killed several years ago and has felt guilt about since. Douglas Smith is the now grown-up brother come to exact vengeance and kill her. Everything is taking place inside her dream. None of this quite explains why Douglas Smith has no awareness that he is her brother and in fact thinks she is his girlfriend, or for that matter why he (a character in a dream) ends up having another entire dreamed life within her dream.

It ends up being a film of occasional strange and interesting moments (but not nearly enough). It is one where you feel that the desire to majorly twist with audience’s minds was something that either the filmmakers did not clearly communicate or the desire to top all of the other mind-bending twist films out there caused them to have to second guess the rest of the game so much that the film became an improbable pretzel of twisted logic. I like this sort of film when it does this well – see the recent The Ghoul (2016) for a much better example – but Bottom of the World seems like a wannabe.