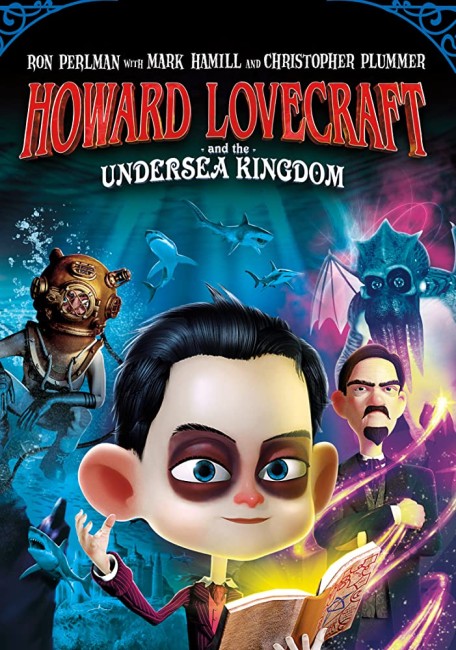 Howard Lovecraft has dreams of Spot calling to him, imploring him to protect his father’s journal from Abdul Alhazred. In R’lyeh, Spot astrally travels to aid Howard only for Abdul to imprison Spot’s body. Howard is dragged away by his mother who has become possessed by Abdul and is starting to transform into a fish person. Howard escapes and gains the aid of Dr Henry Armitage, librarian at the Miskatonic University, which holds the world’s largest repository of occult books. Henry warns Howard that Abdul must be prevented from obtaining the third of his father’s journals as all three will combine to become The Necronomicon and allow Abdul to enact the spell that will turn Spot into Cthulhu. Howard frees his father from the asylum. Joined by Spot’s disembodied soul and Dr Armitage who teaches Howard in the use of spells, they set out, allowing Mr Lovecraft to lead them on a journey through the portal to the underwater city of Yuggoth to retrieve the journal.

This was the second of three animated films about the adventures of a young H.P. Lovecraft. It was preceded by Howard Lovecraft and the Frozen Kingdom (2016) and followed by Howard Lovecraft and the Kingdom of Madness (2018). All three films were made by Sean Patrick O’Reilly who manages the British Columbia-based Arcana Studio. O’Reilly based the films on his own trilogy of graphic novels.

Sean Patrick O’Reilly’s intention has been to create a series of children’s films featuring a juvenile version of horror author H.P. Lovecraft as the hero. (For more detail about H.P. Lovecraft see Lovecraftian Films and bottom of the page). As in the first film, O’Reilly mixes and matches Lovecraft characters, places and entities. There is Henry Armitage (voiced by Mark Hamill), the librarian at the Miskatonic University who was introduced in The Dunwich Horror (1928), who here gets an expanded role as an occult expert. There’s also a Dr West (voiced by Christopher Plummer) about whom we don’t know much but presume is the Herbert West character from Herbert West – Reanimator (1921-2).

There are origin stories offered for familiar aspects of Lovecraftian mythos. Here we learn that Howard’s best friend Spot (introduced in the previous film) could end up becoming Cthulhu. We also learn that Howard’s father’s diaries became the basis of The Necronomicon, which the villainous Abdul Alhazred (who is cited by Lovecraft as the author of The Necronomicon) is trying to unite. There is a visit to Yuggoth, which is supposed to Pluto in the Lovecraft mythos, and whose inhabitant/guardian is now Dagon, the fish deity in Lovecraft’s self-titled story of 1917. Howard is also infected with ‘Innsmouth hands’ named after the amphibian hybrid peoples of The Shadow Over Innsmouth (1931).

The idea of a juvenile adventure through the Cthulhu Mythos is a cute one, although I am not sure it is enough to extend to three films. What kills any interest people might have is the low quality and limited animation – CGI that renders everything in simple blocky digital figures and very low quality backgrounds. There are often scenes where people’s hands don’t even connect up with objects, while the various scenes battling Abdul Alhazred never amount to much more than a few blasts of patterned digital magic blasts being flung at various entities. Most of the film is a fairly routine effort.