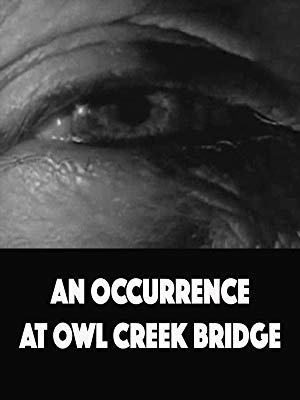 aka Incident at Owl Creek Bridge; An Occurrence

The Confederate army sentence a man to death and hang him from the side of a bridge. Instead, the rope snaps and the man falls into the river below. He manages to swim downstream and escape to safety. He runs through the woods and finally returns home. However, as his wife comes out to meet him and her arms go around him, the man’s neck snaps at the end of the rope.

This short 28-minute film is an adaptation of Ambrose Bierce’s famous short story An Occurrence at Owl Creek Bridge (1891). The short story has become justifiably famous for its twist ending wherein the hanged man’s apparently near-miraculous escape is abruptly turned on its head and explained as hallucinations occurring in the moments before his death.

That said, the deathdream twist ending had first appeared in the film Outward Bound (1930) and its remake Between Two Worlds (1944) about a group of passengers on a cruise ship discovering they are on a journey to the afterlife. There had also been two earlier adaptations of An Occurrence at Owl Creek Bridge with the silent film The Bridge (1929), the first film of Charles Vidor, and in 1959 as a half-episode episode of Alfred Hitchcock Presents (1955-62).

An Occurrence at Owl Creek Bridge won a Best Short Film award at the 1962 Cannes Festival and the Academy Award as Best Short Film in 1964. It was subsequently picked up by CBS and re-edited to become an episode of The Twilight Zone (1959-64) for the series final season (although was not, as is frequently misreported, the last episode of the series ever aired). What most people do not know is that An Occurrence at Owl Creek Bridge was originally a segment of the anthology film Au Coeur de la Vie (In the Midst of Life) (1961) from director Robert Enrico, which adapted three Ambrose Bierce short stories. The rest of Au Coeur de la Vie was regarded as lost for many years, until a print turned up in recent years.

The video version seen here is unfortunately a print taken directly from The Twilight Zone – it even comes with Rod Serling’s introductory narration intact. The print copy is also poor quality. Nevertheless, the story comes across effectively. There is an excellent build-up of initial atmosphere and the subsequent scenes of Roger Jacquet being free and running through the woods delight in a rapturous sensuality, drinking in the natural delights as though he were discovering the world all over again. The twist ending comes with appropriate shock effect. The story is told tightly, effectively and without any superfluity.