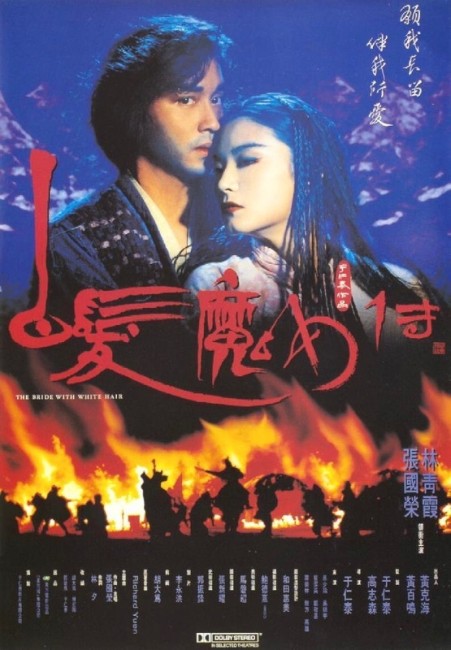 During the Ching Dynasty, men come to the Eternal Snow Mountain seeking to obtain a flower that blossoms every twenty years in order to heal the dying Emperor. However, the mountain is guarded by the swordsman Cho Yi-Hang who slaughters all of them and says that the love of a woman is more important than the life of the Emperor. Cho was an orphan who was raised by the priests of the Wu Tang Clan where he was trained in martial arts and sword skills. After wandering into the forest, he saw a beautiful woman living amongst the wolves and became fascinated with her. She had no name and so he called her Lien Ni-chang. He then discovered that she was an assassin for the rival Chi Wu-shuang cult, led by a witchcraft-practicing pair of brother and sister Siamese Twins. Lien Ni-chang and Cho were duty bound to kill the other. Instead, the two forsook the duty of their respective clans to pursue their love for one another.

The Bride With White Hair is an entry in Hong Kong’s Wu Xia flying swordsman cycle, the genre that was popularised by the likes of Zu: Warriors from the Magic Mountain (1983) and A Chinese Ghost Story (1987) and turned into a English-language mainstream crossover hit in the West a few years later by Crouching Tiger, Hidden Dragon (2000).

The Bride With White Hair follows the established traditions of most of the films in this subgenre. Director Ronnie Yu has shot the film with florid over-ornamentation – all lushly dressed interiors, pastel lighting schemes, love scenes in waterfalls and drifting petals. (The film is photographed by Peter Pau who went onto win an Oscar for his work on Crouching Tiger, Hidden Dragon).

However, beyond the acclaim the film has attained with Hong Kong aficionados, The Bride With White Hair is uneven and often inconsistent in tone. Ronnie Yu will go from scenes of ferocious swordplay into the sappy comedy beloved in Hong Kong cinema. Scenes of great beauty like the young Cho rehearsing with his sword against a pink/orange sunset or amid the fall of blossoms sit alongside some of the genre’s usual aerial acrobatics that look decidedly cheap and perfunctory.

One gets the impression that Ronnie Yu was trying to do something different with the Wu Xia film – he seems to want to move beyond all the acrobatics into creating a lush romantic epic and The Bride With White Hair has often been called a “wu xia equivalent of Romeo and Juliet” – but failed to achieve what he wanted.

The plot is often hard to follow, at least until its romance takes over some of the way in. The acting of particularly Elaine Lui as the Siamese sister is so over-the-top as to appear crazed. Nevertheless, The Bride With White Hair has its moments – some of the mid-air fights and swordplay are good despite their familiarity and there is the odd imaginative touch like Brigitte Lin whipping people with her long hair. Leslie Cheung smoulders with a sultry male sexuality – he seems to have enough in that department to make up for the mannish looks of Brigitte Lin.

There was a sequel released the same year with The Bride With White Hair 2 (1993), which reunites Leslie Cheung and Brigitte Lin and is a more straightforward Seven Samurai-type story. Here director Ronnie Yu has departed and turned directorial duties over to this film’s editor and co-writer David Wu. The same book that the film is based on had furnished an earlier adaptation White Hair Devil Lady (1980).

Ronnie Yu was one of the original directors at the start of the Wu Xia cycle. He has made martial arts efforts like The Postman Strikes Back (1981), the horror comedy The Trail (1983), the horror comedy The Occupant/The Tenant (1984), the horror film Bless This House (1988) and subsequent to The Bride With White Hair, the Wu Xia Phantom Lover (1995). He has also made the crime thriller The Saviour (1980), the psycho-thriller Mummy Dearest (1985) and the gangster films Legacy of Rage (1988) and China White (1989). With the handover of Hong Kong to China, Yu departed for the US, making English-language films like Warriors of Virtue (1997), Bride of Chucky (1998), the action film The 51st State (2001) and Freddy vs. Jason (2003), before returning to make the acclaimed Jet Li martial arts film Fearless (2006) and the historical epic Saving General Yang (2013).