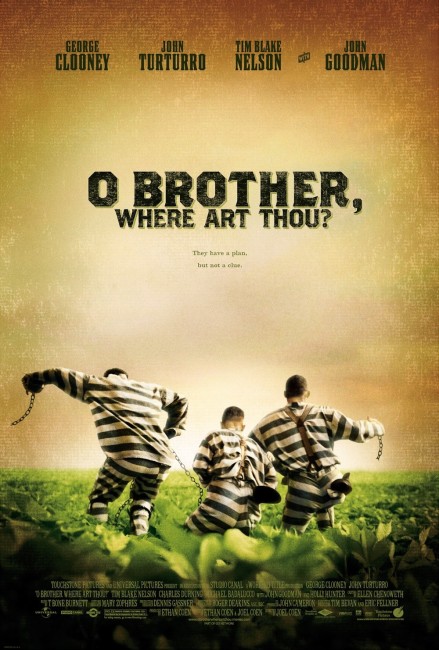 During the Depression, three convicts make an escape from a Mississippi chain gang. They are led by Ulysses Everett McGill who offers the others a split of the proceeds from an armoured car robbery. As predicted by a blind seer, their journey becomes a long and circuitous one with adventures that take them into fame as recording artists along with a blues singer who has sold his soul to The Devil, to encounters with a ruthless one-eyed preacher, bank robber George ‘Babyface’ Nelson, temptation by sirens, encounters with the KKK, to becoming pawns in the race for state governor. Ulysses then learns that his wife Penny is about to be married to another man unless he can win her back.

Brothers Joel and Ethan Coen have made a singular body of work, from their film noir debut Blood Simple (1983) through memorable and distinctive works like Raising Arizona (1987), Miller’s Crossing (1990), the blackly paranoid Barton Fink (1991), the outrightly fantastique The Hudsucker Proxy (1994), the Academy Award winning Fargo (1996), The Big Lebowski (1998) and the later lesser likes of The Man Who Wasn’t There (2001), Intolerable Cruelty (2003) and The Ladykillers (2004) before returning to form with the Academy Award winning No Country for Old Men (2007), A Serious Man (2009), True Grit (2010), Inside Llewyn Davis (2013), Hail, Caesar! (2016) and The Ballad of Buster Scruggs (2018). Although the creative chores are divided between them – with Joel always directing, Ethan producing, and both writing the script – a Coen Brothers film is one that emerges as the product of a two-headed beast.

Coen Brothers films are almost impossible to easily pigeonhole – they seem to defy any easy type of one-sentence synopsis. The release of O Brother, Where Art Thou? to the arthouse rather than the multiplex circuit at the time reflected more the lack of ability to find any easy way to pitch the film to mass-market consumption than it does any lack of commercial prospect – in fact O Brother, Where Art Thou? was the biggest arthouse hit of 2000. During the 1990s, the Coen Brothers’ films became increasingly elaborate and expensive confections, notably The Hudsucker Proxy with its elaborate 1940s New York street sets, which ended up being a big flop. (O Brother, Where Art Thou? likewise has a unique and expensive visual scheme where all the fields and backgrounds, even the swampland, appear to have been drenched in yellow paint). The irony is that while the Coen Brothers’ films are arthouse hits, they, simply by being Coen films, lack the megaplex appeal to justify such budgets.

As the credits inform us, O Brother, Where Art Thou? is based on Homer’s The Odyssey, wherein the Coen Brothers have updated the story to the Depression Era. It is a loose adaptation, keeping only the overall story of a man taking a long circuitous journey to return to his wife who is beset by suitor(s) in his absence. Some of the updatings and interpolations prove amusing – the sirens become washerwoman who weave a bewitching song on the riverbank and who, in one of the film’s running gags, may or may not have turned John Turturro into a toad; in lieu of a cyclops there is John Goodman as a preacher with a eyepatch who bushwhacks the heroes; and there is a blind seer who travels up and down the railroads on a hand-cranked trolley. By and large, the Coen Brothers’ are only intermittently interested in conducting a modernization of The Odyssey and the rest of the film tracks off into an odyssey through American cultural mythology.

There is a sense of not exactly history but more of pseudo-historical pop culture mythology in Coen Brothers films – The Hudsucker Proxy with its origins of the hula-hoop, Barton Fink‘s fictionalization of the lives of Clifford Odets, William Faulkner and Louis B. Mayer. Here we have encounters with real-life bank robber and Dillinger associate George ‘Babyface’ Nelson and a blues man based on the legendary Robert Johnson who reputedly sold his soul to The Devil to play guitar – a legend that became the basis of Walter Hill’s Crossroads (1986).

Most eccentric is the film’s title (which has no relation to anything happening in the film) and has been taken from the Preston Sturges screwball comedy Sullivan’s Travels (1941) – a film whose plot has many intersections with O Brother, Where Art Thou? – concerning a comedy director who goes to live life homeless and ends up in a chain-gang. In Sullivan’s Travels, O Brother, Where Art Thou? was the title of the serious film that the director wanted to break away from comedies to make.

The most notable thing about a Coen Brothers film is its minatory sense of black humour. Characters in Coen Brothers films are like flies whose wings we are forced to watch being pulled off for two hours – John Turturro being tormented by writer’s block in Barton Fink, the conte cruel inflicted on innocent country boy Tim Robbins in The Hudsucker Proxy. O Brother, Where Art Thou? lets its characters off the hook fairly lightly (relatively speaking for a Coen Brothers film) – you might almost think the Coens are starting to mellow out as they enter their forties. The pleasures of O Brother, Where Art Thou? may not be the paranoiac cruelty and black hysteria of previous Coen films, merely that of a picaresque filled with a cast of Coen eccentrics. There is a large cast of Coen Brothers regulars – John Goodman, Holly Hunter, Charles Durning and John Turturro. First-timer George Clooney has a ball in a performance delivered in a bizarre series of slow, blank-jawed, gape-eyed double-takes.

Coen Brothers dialogue always has a superb grasp of regional accent – their grasp of 1940s colloquialism in The Hudsucker Proxy and Minnesota-speak in Fargo. The use of 1930s colloquialism here is an effect that both makes the characters distinctive and is so oddly spaced as to become comic. It is these and the frequent bizarreness of the film – a KKK rally that turns into a musical dance number being the most outrageous – that makes O Brother, Where Art Thou? a rather delectable confection.