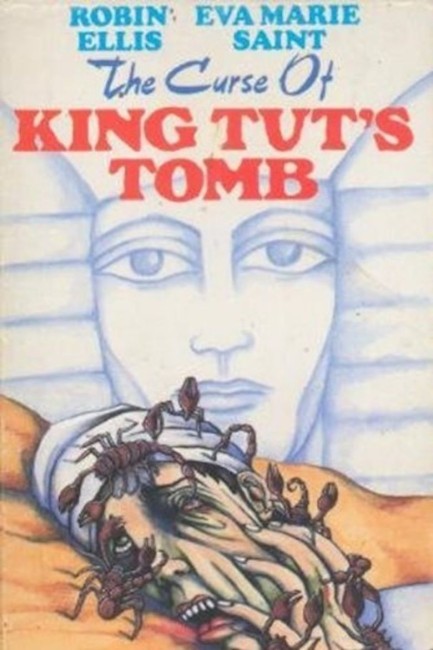 In 1922, after six years of digging, archaeologist Howard Carter uncovers the tomb of Tutankhamen, the most complete burial site of any Egyptian pharaoh ever discovered. With worldwide press attention focused on the find, Howard is resentful when his patron Lord Carnarvon flies in from England and takes all the claim. At the same time, the collector Jonash Sabastian pushes the Egyptian Ministry of Antiquities to discredit and remove Carter so that he can lay his hands on the treasures. All that the press are interested in is the reputed curse on the tomb. Carter ridicules the notion but as a number of deaths occur of people involved with the expedition, he is given cause to doubt.

The Curse of King Tut’s Tomb – not to be confused with the later purely fictional adventure mini-series The Curse of King Tut’s Tomb (2006) – is a tv movie made about the uncovery of the tomb of the pharaoh Tutankhamen. It came out amid a spate of serious Egyptology films made in 1980 that also included Sphinx (1980) and The Awakening (1980). The film is loosely based on the book Behind the Mask of Tutanhkamun (1973).

The Curse of King Tut’s Tomb sets out to tell the true-life story of Howard Carter and the discovery of Tutankhamen’s tomb in 1922. The film incorporates many of the players involved in the historical record – Carter, Lord Carnarvon, Carnarvon’s daughter and wife – and has a reasonable approximation of the circumstances – Carter spending six years searching (although what is not brought out is that one of the things that made the search so lengthy was that it was interrupted by a small thing called World War I), conflict with Egyptian officials and the press fascination with the discovery.

On the other hand, this is a film that turns the archaeological discovery of Tutankhamen’s tomb into a tabloid headline. When it comes to the title The Curse of King Tut’s Tomb, the operant phrase the film takes and runs with is ‘curse’. The supposed curse associated with Tutankhamen’s tomb was a story essentially created by the tabloids. The idea originated in 19th Century fiction, which created many lurid accounts about the curses placed on various Egyptian tombs. By 1922, the idea was well established in the public mind and many articles written about the discovery pushed the notion of a curse. The deaths of various individuals associated with the discovery of the tomb has been claimed as evidence of the curse – there is an entire Wikipedia article dedicated to this Curse of the Pharaohs – where even people that died over a decade later are claimed as victims. (Howard Carter is listed as one of the recipients of the curse, for instance, although he did not die until 1939, seventeen years after opening the tomb). More to the point, the idea of a curse operates in terms of confirmation bias – where anybody associated with the discovery who has died is said to be under its influence irrespective of the means of how they died. The nature of ‘a curse’ is so vague that anything that fits the description of someone dying is taken as evidence of its existence and there is no means where you can differentiate between death by natural causes and the effects of a curse.

Even though Howard Carter ridiculed the idea of a curse in real life (and is seen to pour scorn on the notion in one scene here), the film has no doubts and creates a series of scenes of ridiculously spurious connections where we are led to believe that the curse is in action. The curse is mentioned in portentous terms even before the tomb has been opened and barely a scene goes by without some mention of it. All manner of ominous scenes are created – a native digger (Stefan Kalipha) is killed by scorpions that emerge moments after the tomb is opened; Robin Ellis’s Carter hears voices of the dead as he spends the night in the tomb and others get visions/dreams of the mask of Tutankhamen calling to them; when John Palmer spends the night in the tomb, we see the shadow of a supernaturally-empowered snake moving along the wall as the door of the crypt is shut, leaving him to be suffocated inside; and at the moment Lord Carnarvon dies (from an infected mosquito bite – the one death depicted that actually happened the way it is relayed in the history books), all of the lights in Cairo go out to warn of the curse we are told. When it comes to Howard Carter, the film is rather laughably penned in by the historical record in which he did not die until nearly two decades later but lamely tries to tell us that he was the recipient of a ‘living curse’, which basically means that he become obsessed with the dig to the exclusion of all else.

What also irks is that the film invents characters for the purpose of drama. This is most notable when it comes to Raymond Burr’s collector who is seen to be trying to bribe and force the Egyptian Ministry of Antiquities to shut Carter down so that he can acquire the treasures. This is even built up into incidents that never happened in the historical record – where Tom Baker’s character tries to steal treasures aboard a biplane only for it to crash upon takeoff; or where the opening of the sarcophagus is built up into a big dramatic race against time before Burr and the ministry come in to close the dig down. In reality, none of this happened – there were frictions between Carter and the Department of Antiquities head Pierre Lacau but quite different to the way they are portrayed here. What is even more galling is the end of the film where we get a series of ‘What Happened To’ bios and the fictional characters are wound in alongside the real-life figures.

A reasonable budget has been slung at the film – enough to go on location to Egypt. The film has an impressive cast including Raymond Burr, Harry Andrews, Wendy Hiller, Tom Baker and Eve Saint Marie who is top-billed for a minor role as a journalist. What takes you aback is the images of some well-known actors like Raymond Burr and Tom Baker who have been cast in brownface as Egyptians (although in the case of Burr, who is so big he look like a zeppelin outfitted in a burnoose, his ethnicity is unspecified). Given the controversy that recent films such as Exodus: Gods and Kings (2014), Aloha (2015), Gods of Egypt (2016) and Ghost in the Shell (2017) have attracted over the casting of ethnic roles with whitefaces, it is kind of astounding to see this being conducted so blatantly here. Although perhaps the most egregious example of racism present is the scene where Robin Ellis meets a young native kid (John Palmer) who gives his full Egyptian name whereupon Ellis promptly decides it is too much of a mouthful and renames him Fishbait!!

A much more accurate version of the uncovering of Tutankhamen’s tomb was conducted in the four-part British tv mini-series Tutankhamun (2016) with Max Irons as Howard Carter, as well as episodes of the earlier mini-series Egypt (2005) played by Stuart Graham. There the idea of a curse is barely even mentioned.