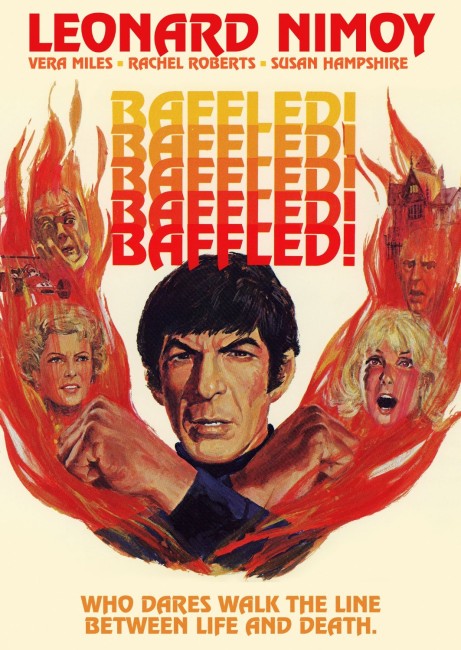 Racing driver Tom Kovac is in the midst of a race when he has a vision of a young girl under threat of great evil at a mansion in Wyndham, Devon. This causes him to spin out and crash. After he speaks about his vision in a tv interview, he is contacted by rare book dealer Michele Brent who has some knowledge about matters occult. She gets him to draw a picture of the house he saw and then shows him that it resembles the photo of a manor in Wyndham. The two travel to the UK and arrive at the mansion, which has been transformed into a bed and breakfast. At the same time, Hollywood actress Andrea Glenn and her twelve year-old daughter Jennifer sign in. Tom is started to find that Jennifer is the girl in his vision. As Tom and Michele follow further visions he has and try to determine who among the guests is seeking to kill Andrea and corrupt the mind of Jennifer.

The main problem I have with all of the aforementioned examples of the clairvoyant murder mystery – no matter that some of them are quite reasonable films – is that they are murder mysteries first and foremost. In them, the clairvoyant is no more than a detective who follows a trail of clues by extrasensory means rather than standard ratiocination. What they are not are explorations of the life of a clairvoyant and what it is like to have these powers or even the origins of the powers, which is what you would expect a fantastical or science-fiction film to be about. They are essentially fantasy films that come with their feet rooted in the mundane.

In this respect, Baffled! is no different. It plays out almost entirely as a murder mystery. Occasionally, Leonard Nimoy gets a few psychic flashes that have to be interpreted but these are no different than a standard detective finding a clue. Indeed, he and Susan Hampshire seem not unlike Miss Marple or Inspector Morse as they run around a British country mansion trying to solve the mystery.

The mystery is not terribly interesting or that well written – at one point, Nimoy and Susan Hampshire conclude that because poison was placed in Vera Miles’ orange juice, Signor Virelli (Christopher Benjamin) might be the likely killer on the grounds that Virelli is Italian and Mediaeval Italians used to poison their rival’s wine. (These days this is something that would get called ‘racial profiling’). There is also an improbable denouement based on people wearing lifelike disguises.

Towards the end, the film throws in an occult conspiracy angle that is not particularly well explained. (Clearly, this was setting up a shadowy cabal for the presumed series to follow). This taps the occult and devil worship movie fad that was all the rage at the time after the success of Rosemary’s Baby (1968). Baffled! was made just before The Exorcist (1973) came along and made a sensation out of the deviltry movie.

The fascination Baffled! holds is that it features Leonard Nimoy who was just caught between his signature role of Mr Spock following the cancellation of Star Trek (1966-9) and the emergence of the Star Trek fan phenomenon. Here Nimoy is young and at the height of his sex appeal. His part as Tom Kovac comes as somewhat of a jolt after being used to him as Spock – we get to see him smiling and laughing for one, which is something you are not used to seeing Nimoy do. The character is even played as somewhat of a playboy – not long after meeting her, he is happily hitting on Susan Hampshire and telling her “You’re a great looking chick.”

Philip Leacock was a regular US tv director. In genre material, he also made tv movies such as the psycho-thriller When Michael Calls (1972), the pandemic film Killer on Board (1977) and the sensationalistic The Curse of King Tut’s Tomb (1980) about Howard Carter’s discovery of the tomb of Tutankhamun.