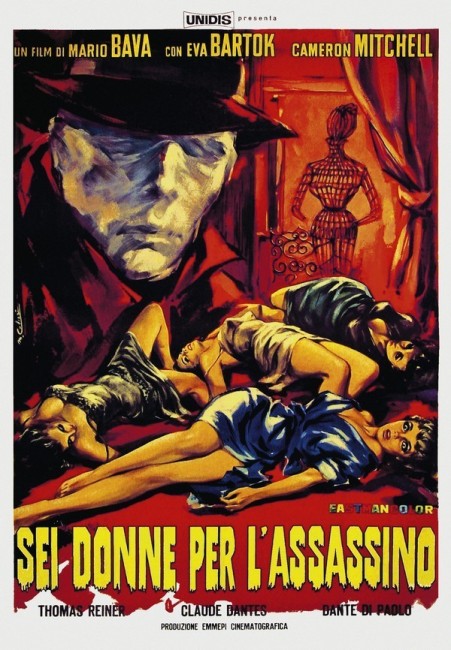 The model Isabella is found murdered, her body stuffed in a cupboard in the fashion house of Countess Christina Como. The police investigate and talk to the other models. It is discovered that Isabella left behind a diary and it is believed that this might hold details about the man Isabella was seeing or the person she is reputed to have been blackmailing. However, the masked killer then begins killing other models.

Blood and Black Lace is one of the essential films in the cult of Italian director Mario Bava. Bava first appeared (at least as a credited director) with the amazing Black Sunday (1960), which created the continental Gothic horror film of the 1960s and proved an extremely lucrative niche for several years. Although there are one or two films that can be cited as precedents, it was with Blood and Black Lace that Bava essentially created the giallo psycho-thriller. The giallo (the Italian word for ‘yellow’) was so named for Il Giallo Mondadori, a series of books from the Italian publishing house Mondadori Publishing, which were mostly reprints of English-language thriller writers that were issued with distinctive lurid yellow covers.

The giallo film drew on the success of Alfred Hitchcock’s Psycho (1960), which had spawned a large number of copycat films. The giallo film’s spin was to strip away many of the thriller plotting elements and to instead place the focus on a series of sadistic killings, principally of women. The films are almost always focused around extravagant and arty surroundings and decor. There were a good many of these films that followed, with the genre having been made into a personal territory by Dario Argento who formulated his textbook from everything that Mario Bava laid down here in Blood and Black Lace.

Bava’s extraordinary artistry is evident from the opening murder where Francesca Ungaro leaves the salon, where she has been outfitted in a vinyl jacket in the brightest scarlet imaginable purely for the visual splendour it offers. Her murder takes place with classical architecture and statues in the background and gorgeously showoffy shots like her walking through a lit-up avenue of trees and with a shot that illuminates her face and throat just before she is strangled. The same scarlet red becomes a predominating visual motif throughout the film with key items – Izabella’s diary, the mannequins in the salon – being painted red.

The film often feels as though Mario Bava has suddenly discovered the colour palette and all the things he can do with lighting schemes. There is the scene where Ariana Gorini goes to antique dealer Dante DiPaolo’s apartment and Bava’s camera wanders through the antiques on multiple levels where each area and cubbyhole is lit a different colour – rich greens, pinks and blue – and we watch for the vibrance of the colour schemes as much as we do the killer stalking through the shadows.

There is an extravagant splendour to the arrangement of costumes, drapes and especially the range of colours in these. There is also the sheer decadent beauty of a shot focused up on a classical painted ceiling as one of the girls lies on a bed blowing smoke rings up at it.

As is frequently the case in giallo cinema, there is an underlying misogyny – the film is largely created as a streamlined machine to show the killing of beautiful women. Bava pushes these towards a sadism, although Blood and Black Lace is certainly tamer than the genre would reach in some of his and others later entries. In one nasty scene, the killer holds Mary Arden’s hand to a hot stove, burning it and then pushes her face into it. The end revelation of the identity of the killer(s) is far better worked out and more psychologically plausible than is usually the case in most giallo films.

Mario Bava’s other genre films are:- uncredited co-direction of Riccardo Freda’s I Vampiri (1957) and Caltiki the Immortal Monster (1959); the Gothic classic Black Sunday/The Mask of the Demon/The Revenge of the Vampire Woman (1960); the Greek muscleman fantasy Hercules in the Center of the Earth/Hercules vs the Vampires (1961); the giallo The Evil Eye (1962); the Gothic horror anthology Black Sabbath (1963); the Gothic horror Night is the Phantom/The Whip and the Body/What? (1963); the Gothic Kill Baby … Kill/Curse of the Dead/Curse of the Living Dead/Operation Fear (1965); the sf/horror film Planet of the Vampires (1965); the spy comedy Dr Goldfoot and the Girls Bombs (1966), Bava’s worst film; the masked super-thief film Danger Diabolik (1967); the giallo Five Dolls for an August Moon (1970); the giallo Hatchet for a Honeymoon/Blood Brides (1971); the giallo Twitch of the Death Nerve/Bloodbath/A Bay of Blood/Carnage/Ecology for a Crime (1971); the Gothic Baron Blood (1972); the giallo/haunted house film Lisa and the Devil/House of Exorcism (1972); and the possession film Schock/Beyond the Door II (1977).