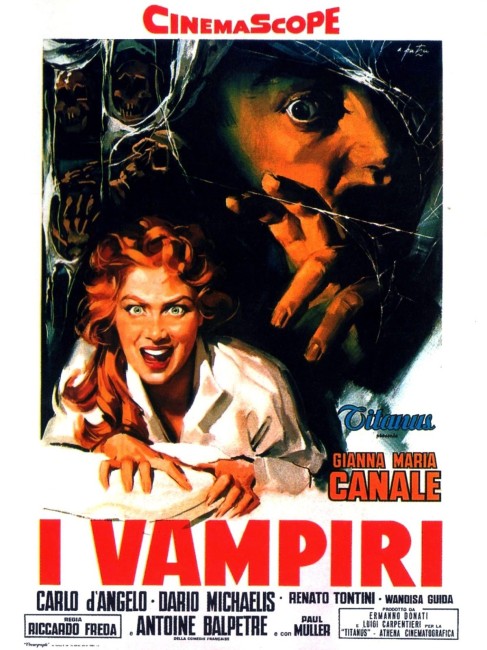 aka The Devil’s Commandment; Lust of the Vampire

Paris is plagued by a series of so-called vampire killings in which young women have been abducted and found drained of their blood. Journalist Pierre Lantin is determined to solve the killings and obtains key information ahead of the police. Pierre’s investigation forces the scientist behind this, Professor Julien du Grande, to fake his own death and go into hiding in the crypt at the castle of his cousin Duchess Margherita. After a big blunder, Pierre is forced by his editor to cover the society ball held by the duchess during which her niece Giselle makes it clear she wants him. He rejects her because of the way the duchess’s similar obsession destroyed his father. However, as his investigation draws closer to the castle, it is discovered the duchess is using a serum derived from the abducted girls to keep herself young.

I Vampiri has the distinction of being the first Italian horror film. In it, you can see the genesis of what would emerge a few years later as the Continental Gothic. The two key creative forces of that era are present here – director Riccardo Freda and his cinematographer Mario Bava who would go on to make his directorial debut with Black Sunday (1960), which took the Continental Gothic film to considerable international recognition, and Blood and Black Lace (1964), which popularised the giallo film.

Even more than that, I Vampiri sets down the Gothic style that the 1960s films drew on – brooding castles and old houses, decaying hallways and dungeons, the rich and moody black-and-white photography, the femme fatale (who would usually be played by Barbara Steele) and the obsession with age, beauty and disfigurement that runs through many of the films.

When I Vampiri was made, what became the Continental Gothic had not yet been set in place and so many of these elements are unformed. The majority of the other films in the cycle all take place in 19th Century settings whereas this is set in the contemporary world. (One of the oddities is that the film claims to be set in Paris and yet the dialogue and all the signs are in Italian, perhaps reflecting that the Italian cinema of the day was suffering an inferiority complex and I Vampiri was desiring to be seen as a French film rather than Italian in much the same way that directors of Italian genre films over the next two decades would hide behind Anglicised names so as to make the films look American).

The other thing that we also have is a murder investigation plot that acts as a frame to lead into the story and often makes what is happening seem more mundane than the eerily atmospheric work that Riccardo Freda clearly wants to open up into. The result feels more like a thriller that has one foot in the mad scientist films of the 1940s that occasionally stumbles towards moments of Gothic brilliance.

The title I Vampiri (which is usually what the film is known as in English and translates as ‘The Vampires’) is incongruous as there are no vampires or blood-drinking, at most scenes where we are told (although are never shown) that women are found drained of their blood by what we later learn is a scientific means. If anything, the film falls more into the vein for surgical horrors obsessed with disfigurement and rejuvenation experiments that we saw a couple of years later with the French classic Eyes Without a Face (1959) and Italian copies such as Atom Age Vampire (1960).

Almost every review of I Vampiri repeats the common claim that Mario Bava directed much of the film after Riccardo Freda left due to a disagreement with the producers – the same claim is also made of Freda’s subsequent genre film Caltiki the Immortal Monster (1959). Exactly how much belongs to Freda and how much to Bava is unclear and it is possible that some of this has been exaggerated due to Bava’s subsequent holding such an influence over the Italian horror film. One has to operate from the starting point Bava is the credited cinematographer and Freda the credited director. At this point, Bava had been working as a cinematographer since 1939 and did not receive his first directorial credit until Black Sunday in 1960. Certainly, the film is imbued with the same kind of mood that Bava gave to Black Sunday; on the other hand, this is exactly what he would have done anyway if he were the cinematographer. This claims also tends to make Freda seem some ham-fisted director who suddenly gained style when Bava came on board whereas subsequent works of his such as The Terror of Dr Hichcock (1962) and The Spectre (1963) showed he had a rich and perfectly fine flair for the Gothic when left to his own devices.

Whatever the case, the film is filled with fabulous shots – the sudden appearance of a giant looming shadow on the wall by a spiral staircase on the outside of the building leading up to the dressing room; the laboratory where the medical equipment in the next room casts a huge shadow through the window between the two rooms; the woods exquisitely backlit and limned in mist; or of giant shadows of dungeon grilles against the wall. Once we reach the castle, the results are stunning:– the crypt where the scientist (Antoine Balpetre) hides behind a giant elaborately carved tomb facade that swings away; or the bedroom where Wandisa Guida is imprisoned, which is a masterpiece of Gothic set dressing with giant decaying four-poster beds covered in cobwebs, nooses hanging from the ceiling for no particular reason and dressers that swing away to reveal hidden rooms filled with skeletons.

Ricardo Freda did direct a number of other horror films including Caltiki the Immortal Monster (1959), Maciste in Hell/The Witch’s Curse (1960), The Terror of Dr Hichcock (1962) and its sequel The Spectre/The Ghost (1963), and Murder Obsession/Delirium (1982).