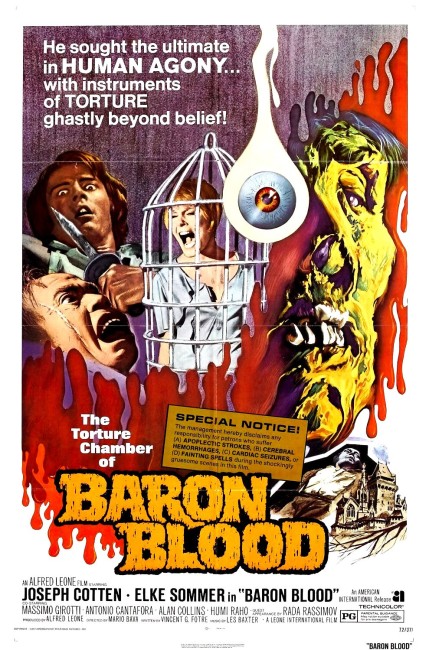 American Peter Kleist arrives in Austria to visit the castle of his ancestor Otto von Kleist. Von Kleist was a notoriously sadistic nobleman who gained the nickname Baron Blood because he reportedly hung the bodies of his victims on spikes outside his castle. Peter believes he has found a parchment left by a witch that lists an incantation for bringing the Baron back from the dead. Disbelieving that it can do so, he and Eva Arnold, a local girl working on the restoration of the castle, read the incantation out in the room where the Baron was killed. Immediately afterwards, a hooded and hideously deformed figure appears and begins brutally killing people.

Mario Bava was one of the great legends of Italian horror cinema. Mario Bava first made his name with the beautifully eerie Gothic horror Black Sunday/The Mask of the Demon/Revenge of the Vampire (1960). Black Sunday‘s success was such that it inaugurated an entire genre of Italian (and continental) Gothic horror films throughout the 1960s. Black Sunday was imitated by numerous other directors including Riccardo Freda and Antonio Margheriti, and made Barbara Steele into an essential icon of continental horror.

Bava returned to the Gothic upon a number of other occasions – in the anthology Black Sabbath (1963) and the likes of Night is the Phantom/What!/The Whip and the Body (1963) and Kill, Baby … Kill!/Curse of the Dead/Curse of the Living Dead/Operation Fear (1965), as well as combining it with the peplum in Hercules in the Center of the Earth/Hercules in the Haunted World (1961). During the mid-1960s, Bava began to veer away from Gothic horror and essentially created the giallo film with the likes of Blood and Black Lace (1964), Blood Brides/Hatchet for a Honeymoon (1971) and Twitch of the Death Nerve/Bay of Blood/Carnage (1971). Baron Blood was the last full-fledged return to the Gothic that Mario Bava would make.

Baron Blood is not quite up there in the same classic category with Black Sunday – the plot seems too indifferently pieced together for that – but is still an effort that shows Mario Bava on good form. The film overspills with atmosphere. Bava shot on location at a real castle – Castle Kreuzenstein in Austria – that provides loads of sepulchral Gothic doom and an authenticity that no art director could ever fabricate. Bava piles on a maximum amount of backlit fog, while creeping his camera through the oppressiveness of the castle’s interior. There is a particularly suspenseful scene where the sinister figure of the Baron pursues Elke Sommer through the fog.

By the time that he made Baron Blood, Mario Bava had become one of the directors pushing an increasing degree of sadism in Italian horror cinema, something that would find its full-flowering in the work of Dario Argento, Lucio Fulci, Umberto Lenzi and Italian gore cinema of the 1980s. Here there are some nasty scenes with Dieter Tressler’s mayor having his neck snapped and then being hung, or of Alan Collins being whacked over the head and then dumped in an Iron Maiden. The makeup job on the Baron looks suitably grotesque.

The script holds no surprise as to the identity of the reincarnated Baron – they had do something with the imported American name actor – that said, Josef Cotten is not an actor particularly suited to doing over-the-top villainy. In the English-language version released by AIP, Stelvio Cipriani’s score has been replaced by one from Les Baxter, who tends to go into overdrive with the ethereal early electronics. (The original score was reportedly much superior).

Mario Bava’s other genre films are:- uncredited co-direction of Riccardo Freda’s I Vampiri (1957) and Caltiki the Immortal Monster (1959); the Gothic classic Black Sunday/The Mask of the Demon/The Revenge of the Vampire Woman (1960); the Greek muscleman fantasy Hercules in the Center of the Earth/Hercules vs the Vampires (1961); the giallo The Evil Eye (1962); the Gothic horror anthology Black Sabbath (1963); the Gothic horror Night is the Phantom/The Whip and the Body/What? (1963); the giallo Blood and Black Lace (1964) the Gothic Kill Baby … Kill/Curse of the Dead/Curse of the Living Dead/Operation Fear (1965); the sf/horror film Planet of the Vampires (1965); the spy comedy Dr Goldfoot and the Girls Bombs (1966), Bava’s worst film; the masked super-thief film Danger Diabolik (1967); the giallo Five Dolls for an August Moon (1970); the giallo Hatchet for a Honeymoon/Blood Brides (1971); the giallo Twitch of the Death Nerve/Bay of Blood/Carnage (1971); the giallo/haunted house film Lisa and the Devil/House of Exorcism (1972); and the possession film Schock/Beyond the Door II (1977).