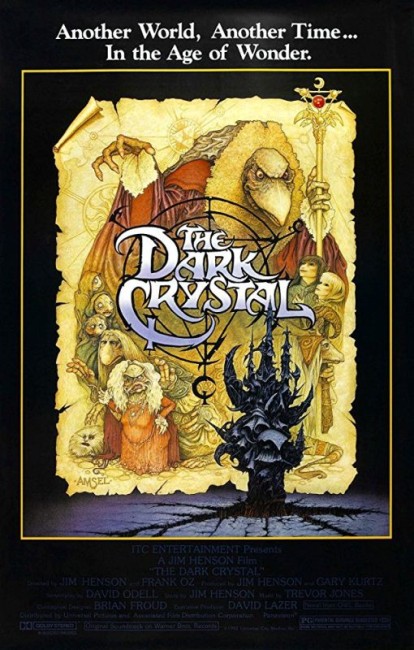 In another world, the evil vulture-like Skeksis and the gentle, wisely Mystics exist in a strange symbiosis – when one is hurt or dies, so is one of the other. The three suns are reaching a point of conjunction that will plunge the world into either good or evil. Jen, the last of the elfin Gelfling race, who was raised by the Mystics, learns that he is the one who is destined to replace a missing shard of the Great Crystal. He sets out on a journey to prevent the world from falling into total darkness, something that takes him to the Skesis stronghold. Along the way, he encounters Kira, a female of his kind. At the same time, the Skeksis despatch the Garthrim warriors to stop him.

Jim Henson was a titan of the entertainment industry. Inspired by watching the puppetry of Edgar Bergen growing up on tv as a kid, Henson became a puppeteer. He spent some fifteen years working in regional television and commercials before getting his break with the children’s show Sesame Street (1969– ). Henson dreamed of creating a puppet show that would have broad appeal to adults as well. After the idea was rejected by US tv studios, Henson found backing from England’s Lord Lew Grade. The result was tv’s The Muppet Show (1976-81), which created the endearing characters of Kermit, Miss Piggy, Fozzy Bear, Gonzo et al. The show was an enormous hit and an essential pop icon of the 1970s. Henson spun that success off into two delightful theatrical Muppets films The Muppet Movie (1979) and The Great Muppet Caper (1981).

After 1981, with the end of the tv series, Henson began to seek more ambitious creative directions. He and his creative partner Frank Oz, a puppeteer who had worked with him since the beginnings of Sesame Street, teamed with Gary Kurtz, the producer of Star Wars (1977), and made a stupendous leap from cutsie cuddliness of Muppetry to pure fantasy with The Dark Crystal.

The Dark Crystal is the ultimate extension of Muppetry. It is light years from the clumsy wooden marionettes of Gerry Anderson or even of the glove-puppet Kermit the Frog and the technical artistry of showing Kermit ride a bicycle that we saw in The Muppet Movie; it is the creation of a complete, three-dimensional artificial world in incredible, breathtaking detail – all sans humans. It was Henson and company not just creating puppets and marionettes but full body suits that are manipulated by multiple puppeteers or radio control, even puppets that were played by performers on stilts (the Landstriders), and a complete world that they live in right down to the flora that inhabits it.

The Dark Crystal is one of the few films that comes anywhere near attaining the complexity of high fantasy as represented by J.R.R. Tolkien, David Eddings, Stephen Donaldson et al in a single film. You can draw an analogy between Henson and Tolkien – Tolkien spent years creating a world and detailing its mythological and pseudo-historical backdrop. By the same token, Henson, drawing on illustrations from fantasy artist Brian Froud, creates a dazzling world filled with exotic and original creatures. One scene panning along a riverbank as the flora and fauna come to wriggling, squawking life is amazing. The depth of adult emotions that Henson and co invest the creatures with is remarkable – the blank faces of the Gelflings are inexpressive but the violence of Kira’s death or the fear shown on the face of the Podlings as they are drained is startling. This is a film that is not afraid to venture into dark places and many people have spoken of how the scenes with the Skeksis and the torture of the Gelflings were nightmare images from their childhoods.

David Odell’s modest if elementary script trades in many stock tropes of the fantasy genre as informed by Tolkien – the hobbit-like little creatures setting forth on a quest into the big outside world; the fantasy McGuffin of the artefact that is sought by all and holds the balance between the supremacy of good or evil in the land; the destined saviour of the world; the evil lords and their brutish orc-like minions – but the dazzling texture of the background and often adult tone make for one of the most stunning of modern fantasy films. You only need to compare The Dark Crystal to one of the hack works of epic fantasy and sword and sorcery that were being created around the era – see the likes of Hawk the Slayer (1980), The Beastmaster (1982), The Sword and the Sorcerer (1982), Krull (1983), Wizards of the Lost Kingdom (1984) and Willow (1988) – to see what a complete fantasy that Henson and Oz create here.

The Dark Crystal was not a huge success when it came out, partly because some protested against the quite adult nature of the film – the scariness of the Skeksis, the torture of the Podlings – partly also because the film came out not long after and was overshadowed by the massive success of Steven Spielberg’s E.T. – The Extra-Terrestrial (1982). It has however gained an enormous afterlife since then. If nothing else, The Dark Crystal is worth seeing as an exercise in ranking imagination and its unlimited technical realisation. The depth of detail put into the design of this world and sets is stunning.

In 2006, the Henson company announced plans for a sequel to be entitled The Power of the Dark Crystal, although this was stalled and nothing further appears to have emerged. This finally emerged as the ten-episode tv series The Dark Crystal: Age of Resistance (2019).

Without Frank Oz, Jim Henson went on to direct the George Lucas produced Labyrinth (1986), another similar venture into fantasy containing an amazing range of non-human puppet creations. Henson died in 1990 of streptococcal pneumonia, preventing what could well have been a major career as a fantasy director. Henson also produced the animated The Muppet Babies (1984-91); Fraggle Rock (1983-8), another Muppet-styled series concerning a gonzo wainscot society, the live-action tv series’ The Storyteller (1987) and The Storyteller: The Greek Myths (1990) that used Henson Workshop creations to illustrate tales from myth and fairytale; the short-lived anthology series The Jim Henson Hour (1989); and produced and provided the creatures for Nicolas Roeg’s film adaptation of Roald Dahl’s The Witches (1990).

Frank Oz went onto a career as a mainstream comedy director with the likes of Dirty Rotten Scoundrels (1988), What About Bob? (1991), HouseSitter (1992), In & Out (1997), Bowfinger (1999), The Score (2001) and Death at a Funeral (2007). Oz’s other forays into genre material as director were The Muppets Take Manhattan (1984), the killer plant musical Little Shop of Horrors (1986), the excellent children’s film The Indian in the Cupboard (1995) and the remake of The Stepford Wives (2004). He also makes cameo appearances in almost all of John Landis’s films and is probably most famous for voicing the role of Yoda in the Star Wars films beginning with The Empire Strikes Back (1980). Screenwriter David Odell stayed with the genre and later wrote the scripts for Supergirl (1984) and Masters of the Universe (1987) and directed Martians Go Home (1990).