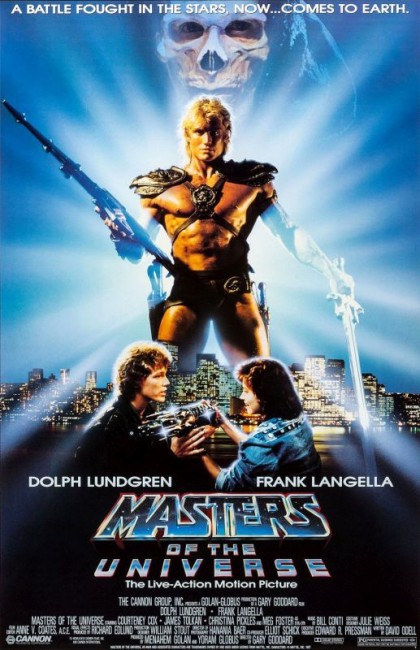 On the planet Eternia, the evil Skeletor has imprisoned the Sorceress of Greyskull who holds the balance of power in the universe in her hands. The warrior He-Man saves the dwarf inventor Gwildor from Skeletor’s troops. Gwildor shows He-Man the Cosmic Key he has created, which can open doorways to anywhere and when in time and space by playing musical notes and is desperately desired by Skeletor. As Skeletor’s troops come, Gwildor randomly opens a doorway and he, He-Man and He-Man’s two companions escape to emerge on present-day Earth. There however the Key falls into the hands of a teenage couple who, unaware of its import, are thrown into the midst of an intergalactic battle as Skeletor’s mercenaries arrive on Earth.

The 1980s were a remarkable decade, a time when consumer packaging became so smart in its cynicism that kiddie marketing tie-ins could work in reverse – with manufacturers creating toy trends and then the media product to go along with them. It began with the success of Star Wars (1977), which showed just how much money could be made from following a successful film up with a line of toys and kitset models. By the time of Return of the Jedi (1983), Lucasfilm and 20th Century Fox had become so hip to merchandising possibilities that the film was deliberately bent out of shape to include hordes of other creatures that could be used to spin toy lines off from. In rapid succession, we then saw the various Care Bears movies, Rainbow Brite and the Star Stealer (1985) and animated tv series such as Transformers (1984-7), Dino-Saucers (1987) and Jem (1985-7), all spun out from lines of children’s toys. And that was before the 1990s and the phenomenon went ballistic with the likes of Pokemon, Tellytubbies, Beyblades and Yu-Gi-Oh (1998–2006).

The He-Man and the Masters of the Universe toys were one of the great success stories of the 1980s. Persistent but unable to be confirmed rumours claim that the He-Man toys were the results of an unsuccessful attempt to market a line of Conan toys spun off the success of Conan the Barbarian (1982), which were dumped when the movie was considered too violent for children, whereupon the Conan dolls were simply reissued with blonde wigs placed on them. First appearing in 1982, there was only He-Man and Skeletor but out of these Mattel spun a line of action figures, battle accessories and even model playsets of Castle Greyskull and Eternia, along with all the requisite comic-books, colouring-in books and lunchboxes. Some 120 toy items were released before the line folded in 1988.

Mattel then approached Filmation to develop an animated tv series out of the toy line. Filmation was an animation studio that had made various tv series based on DC comics superheroes during the 1960s and the animated Star Trek (1972-5), before having their greatest success with Fat Albert and the Cosby Kids (1972-9). In the US, the FCC had just lifted a ban that prevented tv shows from being based on toy lines and He-Man and the Masters of the Universe was the first series to take advantage of this. The success of the show created a good deal of distress from concerned parents’ groups who believed that the line between extended toy commercials and children’s entertainment had been breached and that children were now simply watching commercials that were being marketed under the guise of entertainment.

He-Man and the Masters of the Universe aired for two seasons between 1983 and 1985. (Filmation also created most of the supporting characters in the mythology, which Mattel then turned around and developed as toys). The barbarian hero angle was considered too adult in nature for a children’s tv series – Filmation head Lou Scheimer was a strong proponent on non-violence on tv – and so the animators came up with the more superhero-like concept of the alter ego of the genteel Prince Adam, who would turn into He-Man after raising his Power Sword. The series also tried to allay the high degree of fantasy violence by ending each episode on an uplifting moral for kids. There were several tv spinoffs – She-Ra: Princess of Power (1985-8) concerning He-Man’s twin sister; two video-released movies The Secret of the Sword (1985) and Skeletor’s Revenge (1986), and two later revivals with The New Adventures of He-Man (1990-1) and He-Man and the Masters of the Universe (2002-4).

The Masters of the Universe film was then taken on by Israeli-born but US-based producers and cousins Menahem Golan and Yoram Globus, owners of the Cannon distribution chain. Golan and Globus had first had success in the early 1980s with the teen makeout film Lemon Popsicle (1978). They had then gone on to produce a whole host of Chuck Norris action vehicles, several ninja films and Death Wish sequels, the excruciatingly bad King Solomon’s Mines (1985), a series of cheap fairytales, a trilogy of Tobe Hooper films, including the underrated Lifeforce (1985), as well as the odd gem like Andre Konchalovsky’s masterful Runaway Train (1985). Perhaps Cannon’s worst films were the several ventures into sword-and-sorcery they made – the laughable Hercules (1983), Sword of the Valiant: The Legend of Sir Gawain and the Green Knight (1983), The Seven Magnificent Gladiators (1985), The Barbarians (1987), Gor (1987), Outlaw of Gor (1989) and Sinbad of the Seven Seas (1989).

The directorial helm of Masters of the Universe was turned over to Gary Goddard. Gary Goddard had previously written the screenplay for the softcore Bo Derek Tarzan the Ape Man (1981) and had co-created the modest and underrated Captain Power and the Soldiers of the Future (1987) tv series, which was also a juvenile attempt to conduct toy-like action (soldiers vs transformers) in live-action, and made his feature-length directing debut with Masters of the Universe.

In the film, the mythology of Eternia from the tv series gets watered down into a generic Flash Gordon come Conan the Barbarian space opera/sword and sorcery adventure. There is the requisite borrowing from Star Wars, particularly in the musical score department. (Although, the real uncredited source for the film is surely Jack Kirby’s Orion of the New Gods (1971-7) comic-book from which all the elements – the skull-faced villain, the contestants from a war-torn world, Earth as an intergalactic battlefield, travel vortexes, flying discs, the hard-boiled cop – have been taken).

On the other hand, the film has been stripped of much of the mythology of the animated series – He-Man loses his secret identity as Prince Adam and the ability to transform when he picks up the Power Sword, along with his Battle Cat companion Cringer. Even more disappointingly, Eternia is largely set aside as a backdrop, only there at the beginning and ending, and instead the action is moved to the cut-price location of contemporary Earth.

While Golan-Globus have lavished one of their better budgets on the film, Masters of the Universe is routinely average. There is nothing that engages on an intellectual level. Action and laser beams flash about with verve and variable conviction of effects. The real imagination comes in the marvellous Flash Gordon (1980)-styled rococo art deco sets and array of scrolled brass breastplates and golden gilt costumery, with Skeletor’s emergence in gilten gold costumery at the end being especially resplendent.

The acting front may seem a competition for the worst lines, with Christina Pickles as a narrow winner – Dolph Lundgren would be a contender but it is debatable if monosyllables can be counted as dialogue. Remarkably, Frank Langella stages a grandly theatrical performance that emerges through to the other side as the single note of distinction in the whole silly endeavour.

Masters of the Universe was not a success. Golan and Globus were clearly hoping that it was going to be and had already greenlit a sequel, which they then reworked as Albert Pyun’s post-holocaust kickboxing film Cyborg (1989) with Jean-Claude Van Damme after the film’s middling box-office.

Masters of the Universe is notable for the number of names involved who have gone on to cringe at listing the film on their curriculum vitae. The most notable name to emerge was that of Courteney Cox, who went onto great success in tv’s hit sitcom Friends (1994-2004), who plays the teen girl love interest that gets caught up in the action. Playing the other half of the love interest, the film was also the screen debut of Robert Duncan McNeill who went onto to become a regular as Tom Paris on tv’s Star Trek: Voyager (1995-2001).

In the role of He-Man was Swedish-born karate champion Dolph Lundgren. Lundgren had only appeared in two films roles – as a heavy in the James Bond film A View to a Kill (1985) and as the imposingly implacable Russian nemesis in Rocky IV (1985), and was then best known as singer Grace Jones’s fiancée. Lundgren has since carved out a modest niche as an action star. At first dismissed by all as mindless beefcake, Lundgren has since somewhat defied such typecasting and usually carves his action roles with a fair degree of intelligence and a modicum of acting talent, unlike most of his contemporaries.

Less successful has been the creative team behind the film. Screenwriter David Odell had written a number of films during the 1980s – the excellent Jim Henson fantasy The Dark Crystal (1982), the pirate film Savage Islands/Nate and Hayes (1983), the flop Supergirl (1984) and then went onto make a disastrous directorial debut with the painfully unfunny Martians Go Home (1990), after which he has never worked again. Nor has Gary Goddard returned to the director’s seat and these days mostly works as a producer on interactive shows developed from popular films, including Terminator 2 3-D: Battle Across Time and Star Trek: The Experience.