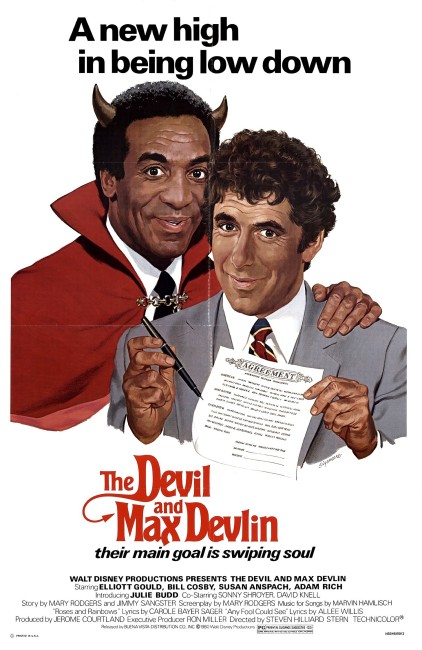 California landlord Max Devlin is knocked down by a bus and wakes up in Hell. There he meets Barney Satin who tells him he will be sent to Level Four unless he can return and convince three innocent souls to sell their souls in his place. Equipped with supernatural powers, Devlin goes back, setting his sights on three victims – Stella Summers, whom he gives the ability to sing and allows her to fulfil her dream of becoming a pop star; nerdy genius Nerve Nordlinger whom he allows to become a championship motocross rider; and a kid who decides he wants Devlin as his adopted father. Unfortunately for Devlin’s two month deadline, the victims, having achieved their goals, then prove difficult to get to sign their contracts.

The 1970s and 1980s were a creative dry patch for Disney Studios. Following Walt Disney’s death in 1966, the output of Disney’s animated films faded almost altogether. Instead, what the studio produced was banal fare like Robin Hood (1973), The Rescuers (1977), The Fox and the Hound (1981) and The Black Cauldron (1985). During that time in fact, Disney’s animation output was overshadowed and outstripped by re-releases of their classics and by their live-action comedies – the Dexter Reilly, Herbie, Apple Dumpling Gang and Witch Mountain films and the like.

By the early 1980s, although Disney made a number of good films like Dragonslayer (1981), Tron (1982), Something Wicked This Way Comes (1983), they were only producing a string of flops. It was not until the creation of the Touchstone subsidiary in 1984 and the regaining of the classic animation form in the 1990s that the studio began to recover. The Devil and Max Devlin was one of the instantly forgettable films made during this dry period.

The Devil and Max Devlin is an extremely lame effort. Somehow Bill Cosby, caught in a slump between hit tv shows like I Spy (1965-8) and Fat Albert and the Cosby Kids (1972-9) and his return to form as America’s Favourite Father with The Cosby Show (1984-92), managed to get wound into playing The Devil. It was also a big comedown for screenwriter Jimmy Sangster who had been one of the cornerstones of the Hammer horror film, writing the scripts for classics such as The Curse of Frankenstein (1957) and Dracula/The Horror of Dracula (1958).

The film is a drab and shabby affair with no involvement offered on any level from tv director Steven Hilliard Stern or photographer Howard Schwartz. For a Disney film, it is a double disappointment without even the inspired slapstick and comedy relief of their better live-action films, or even the silliness of the worst live efforts. It is utterly dreary on all levels. Hell is represented by shabby sets, luridly lit and flowing in C02. The only decent thing in the film is the okay songs written by Marvin Hamlisch and Carole Bayer Sager.

There also seems a cheat to the plot that can allow people to sign away their soul on the belief that they are signing autographs or indemnity forms – surely a signing of a contract for one’s soul involves a full moral awareness of what it is one is doing. Nobody seems to have cared with the whole production.