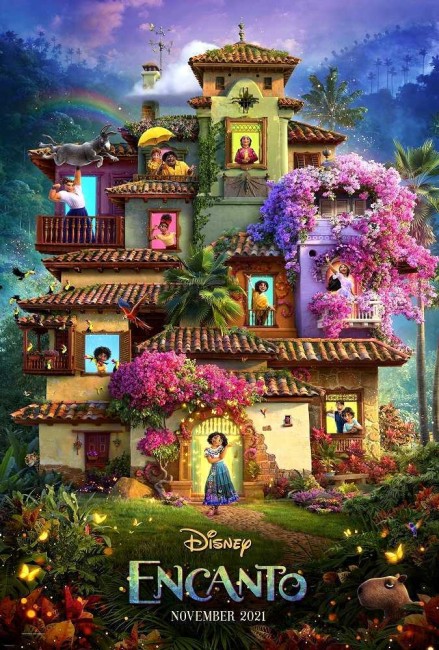 In Colombia, Mirabel grows up as the daughter of the large extended Madrigal family. Years ago, her grandmother Alma fled from armed soldiers but was able to harness the magical powers of a candle to defeat them. She was then able to use the candle to construct their house, which is imbued with a living magic. When each of the Madrigal children come of age, they undergo a ceremony where the house provides them with a door and a special power such as strength, magical cooking and the ability to control plants or weather. Mirabel’s great disappointment is that when it came to her time to choose, the house did not respond. It is now the ceremony for her cousin Antonio who is granted the ability to speak to animals. In the midst of the celebrations, Mirabel has a vision of the house cracking apart and the candle dying but Alma assures her that nothing is wrong. However, Mirabel, fearing the worst, digs deeper, searching for a way to preserve the miracle of the house. She seeks out her uncle Bruno, the recluse of the family, who had a vision of the house’s doom in which Mirabel is central to their fate.

The opening credits of Encanto announce that it is the sixtieth Disney animated film. From the 1990s onwards, Disney has begun making concerted efforts to embrace depict different world cultures with their animated films – the Native American Pocahontas (1995), the Chinese Mulan (1998), the Hawaiian setting in Lilo & Stitch (2002), the New Orleans Creole setting of The Princess and the Frog (2009), Polynesian culture in Moana (2016) and the pan-Asian Raya and the Last Dragon (2021). Encanto is Disney’s venture into South American culture.

Co-director/writer Charisa Castro Smith comes from a Cuban-American background and had a successful career as a playwright throughout the 2010s, as well as producing tv series such as The Exorcist (2016-8) and The Haunting of Hill House (2018). The film comes with a story and songs from Lin-Manuel Miranda. Miranda, who is American-born from Puerto Rican parents, came to fame as author of the musicals In the Heights (2005) and Hamilton (2015). These proved a springboard to his employment by Disney to write the score for Moana, while making an acting appearance in Mary Poppins Returns (2018). Miranda had previously also explored Latin American culture in Sony Pictures’ animated film Vivo (2021) set around Cuban culture, which came out four months earlier in the same year.

I had mixed prospects for Encanto. Disney’s animated films of the 2010s – Tangled (2010), Moana, Frozen (2013) and especially Frozen II (2019) – have largely left one uninspired. Other releases have hit an amiable middle-ground – Winnie the Pooh (2011), Big Hero 6 (2015), Raya and the Last Dragon – and there have only been a couple of highly enjoyable standouts – Wreck-It Ralph (2012) and Zootopia (2016). Director Byron Howard had previously made Bolt (2008), Tangled and Zootopia, while his fellow director Jared Bush had co-directed Zootopia and written Moana.

The moment Encanto opens amid much singing and dancing, you are immediately taken by the vibrance of its colour palette and natural energy. The only issue one has with the opening is that it throws everything at you at once as an assault of colour, song and dance at the same time as one is trying to discern the quite large cast of characters amid sung lyrics are belted out at a rapid pace and also come in accents. I, for instance, did have difficulty working out the various characters’ relationships to one another and went nearly three-quarters of the way through the film thinking all the children had only one parent and that Bruno was Mirabel’s brother. Not that that makes the rest of the film difficult to follow.

The idea of the magical house is a unique and original one – the inspiration may well have been the singing and dancing crockery and furnishings in Disney’s Beauty and the Beast (1991). One is constantly watching the background for the cute little things the house is doing – the shutters waving in distress, the floor acting as a treadmill for Luisa, tiles reaching up to nudge Antonio to step up when he hesitates or as a conveyor for moving the dishes into the sink, the stairs turning into a slide or else popping down to offer a handy fire escape.

Mirabel is one of the most cute and endearing heroines in any Disney film in recent memory. She has a wonderfully strong arc – that of the only member of the family who was not granted a magical gift and setting out to find a way to save the miracle. Outfitted with a pair of glasses that give her giant-sized anime eyes, you can see every plaintive emotion written across her face.

It all works beautifully charmingly. I particularly liked the strength of the story arc – the use of Bruno’s clairvoyant vision and the way we see it come together with Mirabel as the fulcrum between the family’s doom or hope. The end of the film where she is given her door challenges defies you to keep a dry eye. The one quibble I might have is that [PLOT SPOILERS] Alma emerges as the villain of sorts out of left field in the latter third without any real foreshadowing but the film never makes it that clear why she is so intent on holding onto what she has.

It is all conducted with enormous colour, some very listenable songs and much dancing. There are even times when Bush and Howard direct with considerable artistry – I particularly liked Abuela Alma’s flashback montage where we see her marrying, raising the family and their flight from unspecified marauders, which is all relayed in visuals without any dialogue. The results adds up to what I am happy to call Disney’s best film for the last few years and certainly of the 2020s (so far).