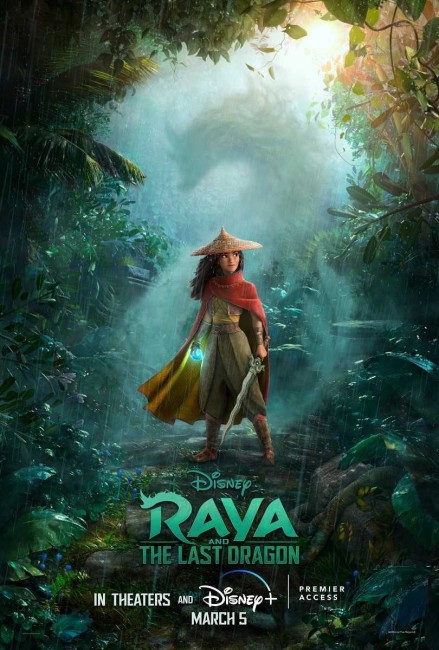 The land of Kumandra was once ruled by benevolent dragons but then came the dark force known as The Druun, which turned the dragons to stone as they tried to stand up to it. 500 years later, Kumandra has split into five different lands, each named after a part of a dragon – Fang, Heart, Spin, Tail and Talon. In the kingdom of Heart, the ruler Benja makes his daughter Raya into a guardian of the Dragon Gem, the last remaining artefact of the dragons. The rulers of the other lands arrive for a feast where Benja hopes to unite them. Raya befriends Namaari, a girl her own age from Fang, and shows her the Dragon Gem. However, this proves to be a betrayal and the other tribes burst into the chamber and try to take the gem, believing it bequeaths prosperity on their land. During the fray, the gem is broken into pieces and each part taken by one of the lands. With the gem being the only thing holding them back, the Druun invade Heart. Raya escapes while her father is turned to stone. Six years later, the now grown Raya searches the rivers of the land for the whereabouts of the last dragon Sisu. She finally locates the eccentric Sisu. Sisu takes human form and joins Raya as she sets out to reunite the broken shards of the Dragon Gem and help restore Kumandra. However, they are pursued by the now-grown Naamari who seeks to obtain the shards of the Dragon Gem for Fang.

Raya and the Last Dragon was the 59th theatrical animated film produced by Disney. The film is co-directed by Don Hall, who had previously co-directed Winnie the Pooh (2011), Big Hero 6 (2014) and Moana (2016), and Carlos Lopez Estrada, who had only previously directed the non-genre, live-action films Blindspotting (2018) and Summertime (2020). The film was simultaneously released to theatres and the Disney+ streaming service.

Disney is one of the studios at the forefront of the push for the inclusion of more diverse groups on film. In fact, Disney has been doing such way before other studios joined the current bandwagon. Films like Pocahontas (1995), Mulan (1998), Lilo & Stitch (2002), The Princess and the Frog (2009), Moana and Encanto (2021) seemed intended to showcase different cultures and ethnicities.

To this extent, Raya and the Last Dragon has been made as a work that can be termed pan-Asian. It takes place in a mythic Fantasy Otherworld that clearly draws from Asian cultures, while the conception of the film’s Dragon is the peaceful, beneficent one from Chinese culture as opposed to the more familiar Western fire-breathing variety.

Furthermore, the film is a mix of pan-Asian talents behind the camera. The script comes from Vietnamese-American playwright Qui Nguyen and Malaysian-born Adele Lim, a tv producer who had a huge hit with the script for Crazy Rich Asians (2018). Disney also began the process of casting animated voice roles with ethnically appropriate actors way back in the 1990s. The voice cast line-up here includes a range of talents including Vietnamese-born Kelly Marie Tran, Chinese-American Awkwafina, Chinese-British Gemma Chan and Benedict Wong, South Korean-born Daniel Dae Kim, Korean-Canadian Sandra Oh and Nepalese-born Dichen Lachman.

The film’s story emerges as generic. It is what John Clute calls a Plot Coupons Fantasy where the protagonist in a fantasy story is given the quest to gather/unite several magic McGuffins to defeat the Big Bad of the show, which takes them through a variety of lands and encounters with different peoples and creatures. Much of the premise – the quest for find the last dragon – was done in the similar and much superior The Last Unicorn (1982).

The one thing that switched me off the film was the constant modernism. Disney had considerable success with Aladdin (1992), a large part of which was due to the role of the Genie voiced by Robin Williams spouting a manic barrage of characteristic one-liners and blatant anachronisms. It was an audience hit and you can see Disney trying to create similar larger-than-life madcap Genie-like characters in subsequent films – Danny DeVito’s Phil in Hercules (1997), Eddie Murphy’s dragon in Mulan and Dwayne Johnson’s Maui in Moana.

As soon as the Awkwafina-voiced Sisu is introduced, she becomes another Genie character and quickly begins to grate on the nerves. Though the film is set in a fantasy kingdom, she is spouting contemporary (and very American-centric) references to nightlights and the awkward kid in school grade, while elsewhere we get references to seafood restaurants and buying on credit. On the other hand, this does settle down after a while – Sisu did not grate with me as much as Robin Williams did and the contemporary anachronisms and in-references are not allowed to overrun the film as they did in Aladdin.

Eventually, Raya and the Last Dragon settles in as a very nicely made mid-range Disney film. It is not quite a modern classic but it achieves what is does nicely. Raya and her nemesis Namaadi are both strong characters and have a great interwoven arc that eventually turns on itself in surprising ways by the end. The film has a strong emotive story about the need for people to maintain trust, especially on an international level, which surely makes this a very apt film for our times.