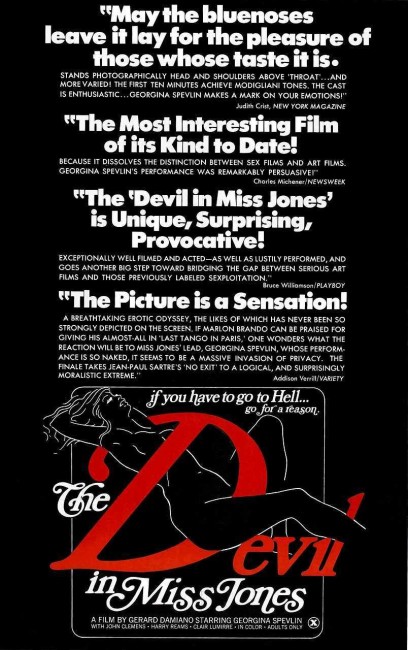 Justine Jones commits suicide, slashing her wrists in the bath. She arrives in the afterlife and is interviewed by Abaca who tells her that because she has led a morally pure life she would ordinarily go to Heaven but the act of taking her own life has condemned her to Hell. Justine laments the fact that because she is now condemned, she never took the chance to sin in her life and wishes that she could have indulged in lust. Abaca decides to allow Justine to return to her life for a time so that she can do so. There Miss Jones decides to lose her virginity and indulge in all the different forms of sexual pleasure that she can.

The Devil in Miss Jones may well have been inspired by the 1970s occult fad that began with Rosemary’s Baby (1968) and hits its peak with the massive success of The Exorcist (1973) a few months later the same year. Although storywise, what The Devil in Miss Jones feels like it draws from is one of the 1940s afterlife fantasies. Although amusingly, it turns the usual sympathies in these films upside down – where in various 1940s films someone is usually rejected from Heaven and sent back to do good deeds and earn their way in, here it is decided that Georgina Spelvin is already damned so she is sent back from Hell to sin and experience all the pleasures of the flesh that she denied herself in her spinsterish existence. The film does reach an interesting ending where Georgina Spelvin is condemned to Hell – perpetually horny and celled up with a guy who demonstrates indifference to the availability of her body. It is clearly a moralistic ending that does ever-so-clearly disapprove of all the wanton lust that the film has put on for our delectation.