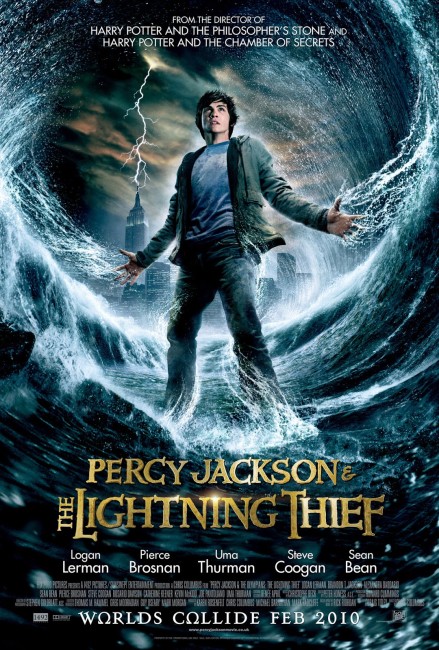 Percy Jackson is an average teenager who suffers from dyslexia and ADHD. On a trip to the museum, his teacher Mrs Dodds takes Percy aside but transforms him into fearsome winged creature and attacks him. Percy is saved as his best friend Grover and the teacher Mr Brunner drive away the creature, which they call a Fury. They take Percy to the remote Camp Half Blood for his own protection. There Grover reveals that he is a satyr, a mythical creature with the legs of a goat who has been appointed as Percy’s protector, while Mr Brunner is revealed to be the centaur Chiron. Mr Brunner tells Percy that he is a demi-god, the son of the Greek god Poseidon and a mortal woman. Someone has stolen Zeus’s lightning bolt – with some of the gods believing that Percy is the thief – and the world will be plunged into chaos unless it is found within fourteen days. Percy begins training, discovering his abilities, including how to gain great power from water. Hades then appears, demanding the lightning bolt and revealing that he has Percy’s mother in the underworld. Percy sets out to rescue her, joined by Grover and Athena’s daughter Annabeth, a fierce warrior. To enter Hades they need to obtain the three pearls that will allow them to escape once there. Their quest requires entering the garden centre run by the Medusa; stealing a pearl from where it is guarded by the Hydra at The Parthenon in Nashville; and travelling to a Las Vegas casino where people are lulled into a blissful dream and never leave after eating the lotus cakes.

Ever since the Harry Potter and The Lord of the Rings films became big business at the start of the 00s, filmmakers have been turning to every multi-story fantasy property they can lay their hands on in an attempt to create the next big franchise. Percy Jackson & The Olympians: The Lightning Thief was one such attempt. There have been some successes among these copycats – the Chronicles of Narnia films, the Twilight series – but mostly the fantasy genre is becoming littered with films that attempt to start off series but never go beyond the first chapter due to the film’s lack of box-office success – see the likes of Eragon (2006), The Golden Compass (2007), The Seeker: The Dark is Rising (2007), Inkheart (2008), Cirque du Freak: The Vampire’s Assistant (2009), I Am Number Four (2011), Beautiful Creatures (2013), The Mortal Instruments: City of Bones (2013), The Adventurer: The Curse of the Midas Box (2014), Vampire Academy (2014), Fallen (2016), The 5th Wave (2016), Maximum Ride (2016) and Mortal Engines (2018). Percy Jackson & The Olympians at least made it to a second sequel but there seemed to be little runaway enthusiasm for either.

Percy Jackson & The Olympians is a series of young adult books created by Texan schoolteacher Rick Riordan. Riordan originally made up a bedtime story for his son who, like Percy here, is afflicted with dyslexia and ADHD, after his son enjoyed the Greek myths and asked Riordan to come up with more of them. Riordan was encouraged to write the story down and The Lightning Thief (2005) became a popular hit when it was published. Rick Riordan wrote a further four Percy Jackson books, as well as several spinoff works. These feature Percy and companions facing various aspects of Greek myth – venturing into the Labyrinth, finding the Golden Fleece, battling the Titans and so on. It is clear with the books (and the film) that Rick Riordan has set out to imitate the Harry Potter books/films substituting Greek myth for magic – a trio of teenage kids with magical abilities; a school where they are trained in the use of their gifts that is closed off to ordinary mortals; the hero who has a great destiny ahead of him as one of the most powerful of the pupils yet understands nothing of his powers.

I will freely admit to not being a fan of Chris Columbus’s films. Columbus lacks subtlety and delivers drama in shallow emotional cues. His films are all obvious where he feels a need to simplify and over-explain every point so that each member of the audience gets what he is saying. There is no awe or mystery to his films – what you see up on screen is all there is to them. Columbus also throws in big special effects sequences that involve much flash and bang but where he seems to lack a crucial ability to conjure any magic. The sad thing about the Harry Potter series is that, though Chris Columbus kicked the series off, every single director who came after him built on what he laid down and discovered more emotional complexity to the characters and did a far better job of conjuring an essential magic out of the special effects.

Sadly, Percy Jackson & The Olympians: The Lightning Thief shows that Chris Columbus has learned nothing from any of the directors who succeeded him in the Harry Potter series and is only doing the same old thing as before. The characters are banal. The film seems driven by various special effects set-pieces where Chris Columbus and the effects houses make a good deal of effort – Logan Lerman is snatched up by a teacher turned into a giant fury; the Medusa turns people into stone; Lerman must face a giant-sized minotaur and battle a fire-breathing hydra; a gigantic flaming Hades manifests (twice); there is a super-powered battle with Logan Lerman and Jake Abel flying about, throwing lightning bolts at one another and Lerman whipping up waves of water – where one can safely sit back and allow the pretty eye candy to wash over one without the remotest engagement. Crucially, at no point in any of this do you have the feel that the characters are in dramatic peril or fighting for their lives.

The story is routinely assembled – it feels as though the film has been churned out by a fantasy cliche plot device generator. The stolen lightning bolt is what Alfred Hitchcock called a McGuffin – an item being sought by everybody that frequently (and even more so here) has no use or importance beyond the need to drive the story. The quest that the three heroes set out on is what John Clute calls the Plot Coupon Fantasy where the protagonists must collect several items in order to achieve their goal, again items that have no purpose beyond their need to drive the story. The hero is also outfitted with Plot Voucher items – items of unique ability (a pen that becomes a sword, flying sneakers, a collapsible shield) that become helpful at points later in the story.

One of the more frankly unbelievable scenes is where Logan Lerman recovers from wounds in sword combat simply by splashing some water on himself and in so doing gains insta-powers to becomes a super-fighter. It is one of the more worrying aspects of the modern Harry Potter copies that every hero now comes as someone who has powers that makes them the top of the game even though they never knew so five minutes before and that they can access these powers and skills instantly without having to go through any training like every person in the real world does – what ever happened to heroes earning their destiny from the ground up? (It is also worth noting that original author Rick Riordan publicly disowned the film).

Logan Lerman is okay in the role – he is a young actor of rising promise and it is not his fault that Percy Jackson is a blandly written part. The same could be said for Alexandra Daddario where it is hard to tell if she gives much of a performance as all the film does is create a strong warrior woman figure – and then promptly give her nothing to do throughout the rest of the film. On the other hand, Brandon T. Jackson is cast in the cliche of the Black Supporting Character who does nothing else except wander through the film making sarcastic asides and smartass one-liners. Pierce Brosnan, Sean Bean and Kevin McKidd deliver performances where they have turned up to collect their paycheques for doing so and nothing more than that. Steve Coogan gives a silly performance where he seems to be trying to channel Russell Brand. The only one who gives any enervation to the show is Uma Thurman who thoroughly camps it up as The Medusa. This falls into one of the bad over-the-top performances that Thurman gives from time to time but at least it is one of the few sparks of life in the film.

The principal cast returned and Chris Columbus stepped back to produce a sequel Percy Jackson: Sea of Monsters (2013) based on the second book in Rick Riordan’s series.

Chris Columbus started his career writing screenplays for various Steven Spielberg productions – Gremlins (1984), The Goonies (1985) and Young Sherlock Holmes (1985), before making his directorial debut with the teen comedy Adventures in Babysitting/A Night on the Town (1987). He went onto direct the comedies Home Alone (1990), Mrs Doubtfire (1993), 9 Months (1995), as well as directed the first two Harry Potter films, the dull science-fiction film Bicentennial Man (1999) and the comedy Pixels (2015) in which alien invaders recreate classic arcade videogames. Columbus then made the first two Harry Potter films and acted as Executive Producer on the third entry Harry Potter and the Prisoner of Azkaban (2004). He also co-wrote the script for the animated Little Nemo: Adventures in Slumberland (1989). In the mid-1990s, Columbus was reported as planning to direct a film version of Marvel Comics’ Fantastic Four, although only acts as producer on the eventual film version Fantastic Four (2005) and its sequel Fantastic Four: Rise of the Silver Surfer (2007). Columbus is also Executive Producer on Monkeybone (2001) and Night at the Museum (2006) and its sequels Night at the Museum 2 (2009) and Night at the Museum: Secret of the Tomb (2014), The Witch: A New-England Folktale (2015), I Kill Giants (2017), The Lighthouse (2019) and Scoob! (2020). He heads the 1492 Productions production company – the date being an obvious play on his more famous namesake.