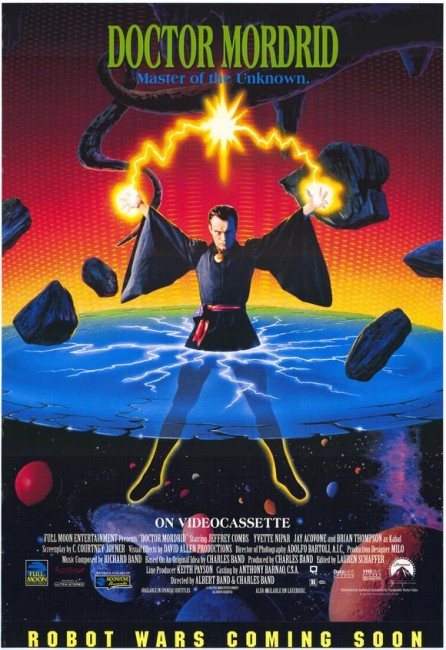 Anton Mordrid is a sorcerer who has been given the assignment of guarding the Earth for the last hundred years. He is now warned by his superior The Monitor that his brother, the evil alchemist Kabal, has escaped and come to Earth, seeking The Philosopher’s Stone that he needs to unleash demons. Mordrid has befriended police researcher Samantha Hunt, his neighbour in the apartment building he secretly owns. When detective Tony Gaudio shows Samantha photos from one of Kabal’s victims, she recommends that he go to Mordrid to identify the occult markings on the body. Instead, the ignorant Gaudio arrests Mordrid. Locked up and with the amulet that protects him confiscated, this makes Mordrid vulnerable to attacks by Kabal’s underlings.

Doctor Mordrid was one of the better films to emerge from father and son Albert and Charles Band’s Full Moon Productions. With Full Moon, Empire and several other companies, the Bands produced a great many low-budget genre films – several entire series of them including the Ghoulies, Trancers, Puppetmaster, Demonic Toys and Subspecies films. Doctor Mordrid was one of the occasions where father and son moved from a producing to a directing role – with both being credited as co-directors. The only other occasion the two were credited together as co-directors was on the children’s film Prehysteria! (1993).

There are rumours circulating around the internet that the script for Doctor Mordrid originally started out as the script for a film based on Marvel Comics’ sorcerer superhero Doctor Strange. It is claimed that Bands had had the film rights to the comic-book for several years but were unable to get the project off the ground. The influence of the comic-book on the film is unmistakeable. Change the names of the title characters, give Jeffrey Combs a pencil-thin mustache and Doctors’ Mordrid and Strange would be virtually identical. As himself, Doctor Strange has made several film appearances with the quite good tv pilot Dr Strange (1978) starring Peter Hooten and the animated Doctor Strange (2007), while the character has been mentioned as a possibility for a film adaptation a number of times during the 2000s, finally emerging as part of the Marvel Comics takeover of the world with Doctor Strange (2016) directed by Scott Derrickson and starring Benedict Cumberbatch.

However, in the words of screenwriter C. Courtney Joyner, this is not the case. Charles Band never owned the rights to Doctor Strange and no such script was ever written. Band however was a huge Marvel Comics fan. He had hired legendary comic-book artist Jack Kirby, the creator of Captain America, various Marvel titles and DC’s New Gods, to develop the concepts and artwork for several films. One of these was for Dr Mortalis, a sorcerer hero. The film started as about 3-4 pieces of artwork and Joyner developed the script out from there, attempting to get the Kirby feel and with the notion of Marvel’s Dr Strange conscious at the back of his mind. Says Joyner of the finished result: “In the light of the unbelievable superhero movies being made today, something like Doctor Mordrid is just a scruffy little footnote to the genre but I really am proud that I wrote a script directly from material that originated with The King of Komics. I’ve been a fan of Jack Kirby’s forever, and this movie is a direct connection to him, even if its origins seem a bit Strange!”

The Bands get right the sense of esotericism that is essential to Marvel Comics’ Dr Strange – in fact, they do a far better job of this than the 2007 animated film that was produced under the official aegis of Marvel Comics. It is cheap esotericism but has an undeniable colour to it – potions, magical devices, inter-dimensional portals and doorways, the imaginative notion of a dungeon in another dimension that floats on an island of earth in mid-air, the character of the Gunner guard who continues in his duty even though his eyeballs have been destroyed by a magical fireball. There are some clever scenes with Jeffrey Combs in the police station, casually slipping out of his handcuffs and using a handkerchief to hypnotise Yvette Nipar and tell her his story.

The film does fall down somewhat with the usual cheap budget afforded by the Bands. This is stretched only as far as the story needs it to be and never any more than that. Thus there is a certain frugality of scenes, action and locations intended to economise on the budget. To the film’s favour, this is not as painfully evident as it is in other Band films – notably the incredibly cheap Prehysteria! series. Band regular David Allen contributes some serviceable stop-motion animation effects – in a scene that prefigures Night at the Museum (2006), the climax consists of the sorcerers duelling at the Natural History Museum with dinosaur skeletons that have been brought to life.

Jeffrey Combs, an actor who came to prominence in the Band-produced Re-Animator (1985), gives one of his best performances as the title character – filled with dignity and gravitas. Yvette Nipar also proves to be an incredibly foxy love interest, one of the best actresses to grace a Full Moon production. As the evil sorcerer nemesis, Brian Thompson has a certain brutish presence, although one wishes the role of the villain of the show had been cast with an actor that didn’t look so physically menacing but failed to suggest any intellectual menace. The dialogue tends to be wooden in Thompson’s mouth, whereas Jeffrey Combs makes it live. Thompson’s acolytes also somewhat laughably look like rock’n’roll groupies.